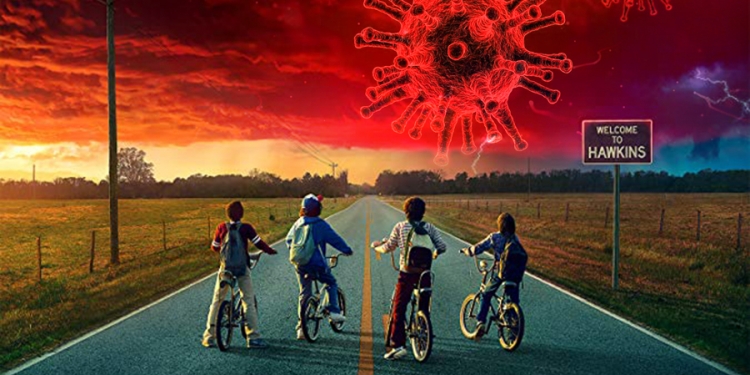 It seems nowhere is safe from the dreaded coronavirus, not even Hawkins, Indiana, the fictional town at the centre of Netflix's smash supernatural series, 'Stranger Things'.
Although there was no exact date for the upcoming fourth season of the Duffer brothers' hit series, we were expecting its release this year. However, the release date is now likely to be pushed back due to the global COVID-19 crisis, which has halted production of the show.
The news comes after President Trump declared a state of national emergency. Like most companies, the situation as caused Netflix to think about the way it works. Where possible Netflix employees have been asked to work from home and production has been shut down on all of the scripted shows and films currently in production.
This of course affects 'Stranger Things', which is currently in the pre-production stage. It's not yet known how long the delay will last, or how much it will affect the show's launch date - since a date was never confirmed, we may not even notice.
The temporary suspension will most likely be in effect until at least April, when most companies will then re-assess the situation.
The problem with delays in the television and movie industry is that when production resumes there will inevitably be diary clashes for the stars, who will most likely be lined up for other projects. This could result in further delays to the series or potentially even casting changes.
Little is known about the new season at this time. The story was wrapped up nicely at the end of the third season and the gang went their own separate ways, but you can be sure Hawkins has at least one more surprise up its sleeve that will bring the brave kids back together for at least one final adventure.
The question is, where will the adventure take place? A teaser trailer dropped last year confirmed that the show would return, but perhaps with a twist. A line in the trailer, "we're not in Hawkins anymore," suggests that the next season will be set outside Hawkins.
This has lead fans to speculate where the action will unfold this time around, perhaps in the Upside Down itself?
It also seems that Russia will be a setting for season four. At the end of season three we journey to Russia, where a mysterious American prisoner was being held. On Valentine's Day a teaser trailer dropped for the upcoming season that showed one of the show's best-loved characters in Russia.
The trailer also confirmed one thing all 'Stranger Things' fans had been hoping; that Hopper didn't die. Jim Hopper has been protecting the town of Hawkins since the very first episode of season one, but sadly, it looked like he may have met his maker in the season three finale. However, the teaser trailer has confirmed he would be returning in season four.

Even before the third season was officially announced by Netflix, the show's creators not only hinted that a third will happen, but also a fourth season. Ross Duffer announced the news in an interview with Vulture saying, "we're thinking it will be a four-season thing," but it could even end up being five seasons long.
The third season left us with many unanswered questions. Just the post-credits sequence alone has got us scratching our heads. The sequence showed us another secret bunker. This time in Kamchatka, Russia, where we saw two guards in military uniform. As one of the guards went to open a cell door, the other said to him "No. Not the American," revealing that the Russians have an American prisoner in captivity.
If you can't wait for season four to land on Netflix, then check out our suggestions of what to watch after Stranger Things and keep an eye on the latest news on Stranger Things season four here.