Stranger Things 3 Trailer Drops – What Do We Learn?

Netflix unleashed the latest trailer for the forthcoming third season of Stranger Things. What does it tell us about the new series? Well, probably the first thing is WE CAN'T WAIT UNTIL JULY THE 4TH TO WATCH IT!!!

Okay, initial excitement over, what does it tell us?
The opening gag in the trailer, with Eleven controlling a bunch of toys to prank Dustin tells us a couple of things.

Firstly, the core crew are back and ready to take on the worst Hawkins can throw at them.
Also, two. Expect some gags. There's always been some comic relief in Stranger Things, often involving Dustin, and this is a nice ‘joke that backfires' prank.
Thirdly. Toys. Moving by themselves. Haven't we seen this somewhere before? Why, yes, that will be as seen in Steven Spielberg's famous Close Encounters of the Third Kind. So, let's hope there's plenty of these 80s film references for us to keep a look out for in season three.

Everyone Is Growing Up

Much like Daniel Radcliffe growing up in the Harry Potter film series, the necessary lengthy delays between filming for Stranger Things means the core cast of young actors who were very much children at the start of the filming process are now heading full steam towards adulthood. Maybe that means we'll see more adult themes in the series? Oh, and the trailer helpfully includes the phrases "We're not kids anymore" and "What did you think? We were just going to sit in my basement and play games for the rest of our lives?" just in case you were wondering.
A couple of great examples of this in the trailer are the scenes of Max and Eleven, obviously listening to pop music, and dancing in a bedroom:

And later, almost a flash frame, of Max and Eleven, made-up, in the mall perhaps?

This tell us the relationship between the pair of them is maturing, but also they're leaving the childish things behind them and acting like proper teens.

All Hands On Deck

It's great to see all cast members present and correct. 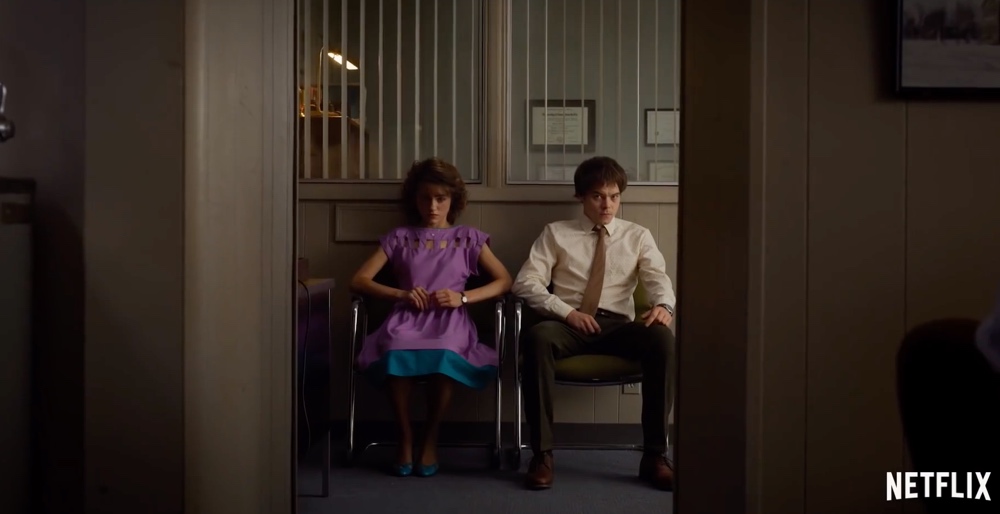 Popping up in the offices of the local paper, The Hawkins Post, are sweethearts Nancy and Jonathan. They LOOK like they might be there to interview for a job, or perhaps they've got a story they think needs sharing? 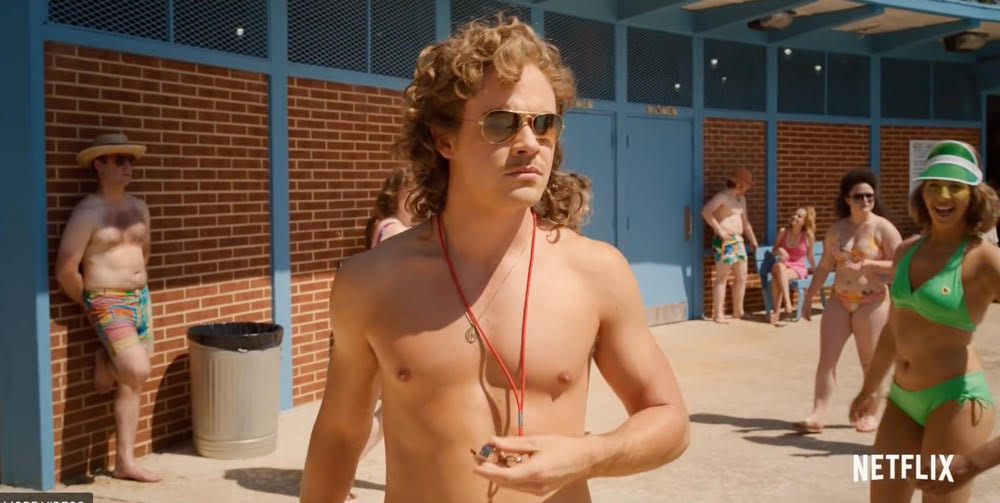 Max is with the gang, as expected. Her step-brother Billy Hargrove appears to have got some sun and scored a job as a life guard at the local pool. But we also see something growing in Billy's arm later, something that looks distinctly like it crawled out of the Upside Down. Also we see a female lifeguard he flirts with in this shot later apparently being pulled underwater - not a good sign. Do you think alien life consuming your body could cost him his summer job at the pool? Will this stop him being a dick in season three? Who can tell?

We also get our first look at a key new character, Mayor Kline. Played by 80s film stalwart ('Princess Bride', 'Top Gun' to name but two) Cary Elwes, we were promised he was going to be a sleazy politician and ye-gods he appears to have got the look just right!

We even get to see Lucas' sister Erica, crawling around in an air duct looking like a trainee John McClane from 'Die Hard'.

There's Something Out There

We see the gang erecting some kind of aerial. Who, or what, they're trying to communicate with we'll have to wait and see. Odds on they end up attracting the attention of something they shouldn't.

The Starcourt Mall featured in the previous season three trailer and features very heavily in the new trailer.

The use of the mall as a centre of activity is interesting because after the darkness of the first two seasons, having some key scenes set in a heavily populated, exciting location like an 80s mall might help fight off accusations that Stranger Things was just getting repetitive. Also, it's a more adult environment for the gang to move towards. No longer of the age to be trapped, playing at home all the time, they want to discover that grown-up world out there.
Also, it gives us 80s film nerds a chance to tick off a load more references as malls feature heavily in such films as 'Weird Science', 'Dawn of the Dead' and 'Commando'.
Think about it, they're kids in the 80s, what else are they going to do, it's years until Tim Berners Lee comes along and invents the web!

For many, the rock in the middle of Hawkins is the slightly grizzled, smelling of day old cigarettes, Hopper.

Will he get happiness in season three? Based on this scene in the trailer, unlikely. He appears to have been stood-up, possibly by Joyce Byers, who is seen at home with a dinner for one.
We later see him at the fair, with Joyce, involved in a chase, and drawing his gun, and telling Joyce :
"It is important to me that you feel safe. I want you to feel like this can still be your home."
That's what we expect from the protective Hopper, but we want to make one thing clear. If they kill off Hopper in Season 3, we're cancelling our Netflix subscriptions, got that?

It's not Stranger Things without a secret-labs worth of nasty stuff ready to be unleashed on the poor, unsuspecting town of Hawkins. (Honestly, if you lived there, wouldn't you have moved by now?!?!)

He appears to be a 'traditional' scary dude with a gun, because not every threat our heroes in Hawkins face is always supernatural! Could this be the guy Hopper is chasing when he's shown pulling his gun at the fair earlier?

Eleven In The Upside Down

This little clip shows us some characteristic reddish lightning firing through a black sky, before seemingly being trapped under ice. Proof that Eleven is never very far from being dragged into this alternate world.

Okay, we don't know exactly what it is, but let's just agree this kind of beastie is pretty standard fare for Hawkins.

No idea how he fits in, but he looks pretty cool! Is the old school gas mask evidence that this guy has travelled through time to get here? This season is set in 1985, specifically around July 4th. A certain DeLorean featuring time travel-based movie was released in America on July 3rd, 1985, so we hope Back To The Future gets at least some kind of tip of the hat in Season 3 of Stranger Things, either through the characters watching the film, or some tie travel antics popping up.

Something Nasty Happening To Steve

A later flash-image of Steve apparently getting something nasty injected into his neck, having first been beaten up. Nice to see he's still wearing his nautically-themed ice cream selling uniform though.

Team Steve & Dustin Stronger Than Ever 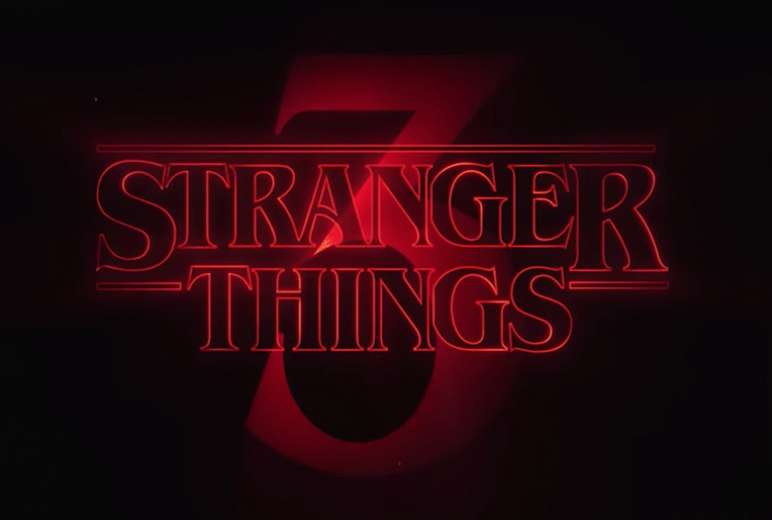 The music in Stranger Things has always been a critical part in the drama. Both the  hits of the 80s that help add to the historical setting of the series, or the specially composed synth-led soundtrack composed by Kyle Dixon and Michael Stein. This trailer is soundtracked by ridiculously-dressed hair-rockers Motley Crue’s 'Home Sweet Home' and a rejigged version of The Who’s 'Baba O’Riley', before Dixon and Stein's ominous synth wave score kicks in as the title credits roll.
We've had a go at trying to second guess what music we can expect to see in season 3 of Stranger Things, also, we've listed all the music from Stranger Things Season 2  complete with a Spotify playlist. Fill yer boots!
You might watch Stranger Things for many reasons, the shocks, the drama, the acting, the script, but at the core of the series is the theme of childhood friendship. We know that despite their disagreements the gang of kids central to the series are tight, but one of the greatest developments in the second season was the burgeoning friendship between geeky Dustin and ultra-jock Steve. The trailer shows this friendship has grown, and the boys can't stop mucking around.
Roll on July 4th, we can't wait!
Don't forget to check out all our other Stranger Things 3 features.