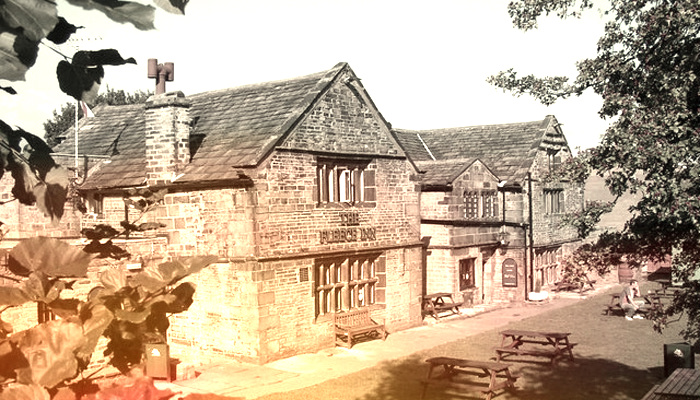 Photo: © Humphrey Bolton
Tonight Yvette Fielding takes her team of intrepid ghost hunters to a 400 year old public house in West Yorkshire where they encounter some of the most violent poltergeist activity they have ever witnessed.
The Fleece Inn was built in the early 1600s and is known for its grim legends, it's the embodiment of the classic haunted pub stereotype. With rumours of secret tunnels, deaths and even murders, it's no wonder that reports of ghost sightings here are very common. The reports range from poltergeist activity like the smashing of glasses, right through to full apparitions, including that of a girl who's been spotted throughout the pub and looking out one of the bedroom windows.
The show's resident skeptic Glen Hunt is quick to point out to Yvette that the window in question overlooks the pub garden and perhaps the testimonies of beer drinkers in the garden aren't the most credible. Glen might be skeptical, but others are convinced that the Fleece Inn is one of the most haunted pubs in the UK, it even boasts its own headless horseman who's been seen leaving the pub and climbing aboard his stage coach on many occasions.
Other paranormal activity includes dark shadows which are seen moving through rooms on a regular basis and a negative entity which does all it can to get people out of the pub. 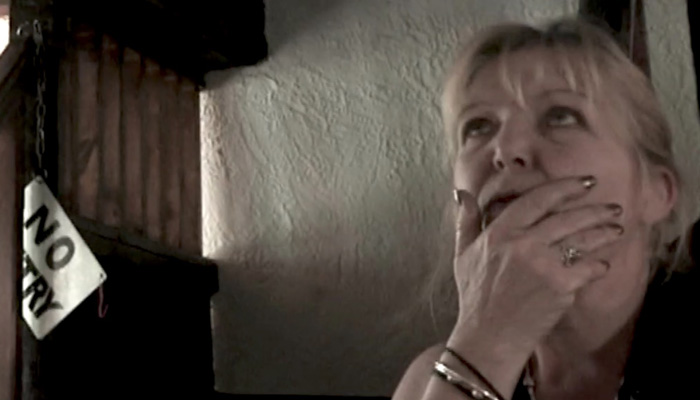 Before the vigil even began, there was a huge scare in store for the pub's landlady, Christine. While being interview earlier in the day she had the fright of her life when a chair loudly crashed to the floor form the mezzanine floor above. After the initial shock passed, she said "I've never experienced anything as violent as that before."
Glen, who'd reviewed the footage said, "there was no one up there, absolutely no one up there. Its's just a mezzanine floor, you can hear the creaking if anybody's up there". Perhaps the event was faked? Glen doesn't think so, "I know this is a television show, but there is no one on this God's earth who would want to throw a chair at someone from a great height".

Tapping Session In The Main Bar 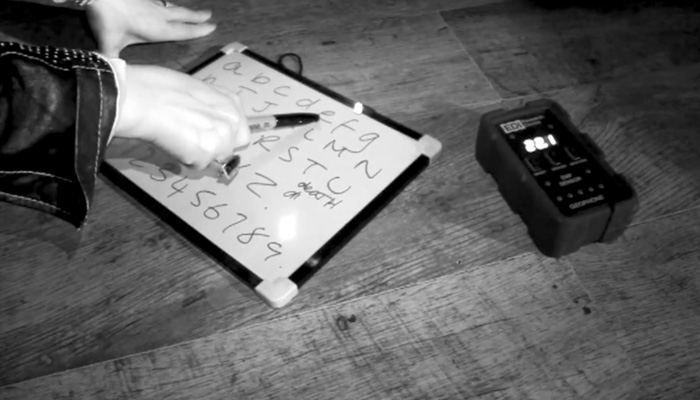 Yvette and co started their investigation in the main bar aided by a new gadget which Glen had brought along called an EDI meter. It's actually a really cool device, I recently bought one my self, you can read my review here.
As well as the new piece of kit, Yvette used a tried and tested means of communicating with the dead, a tapping board. Yvette wrote out the alphabet and asked any spirits present to tap to indicate a letter as she passed her finger over the board, thus spelling out a word.
With Karl Beattie and Stuart Torevell watching on, Yvette asked the spirit to spell out its name. , but listening closely for knocking sounds and writing out each letter the spirit indicated gave them the word "death".
Yvette asked, "can you give us another word, a message, anything?" This time the word "die" was spelt out and Yvette needed clarification, "you want us to die?" and eerily there were two taps for "yes." Yvette continued, "are you going to kill us?" There were no audible knocks to answer this question but the vibration detector on the EDI meter register the response, "yes".
Yvette continued to question the spirit of the bar, "so you're a murderer, and you're quite happy aren't you?" Again there were two knocks for "yes". Moving back to her tapping board, Yvette asked "why won't you moved on, what are you scared of?" The word "nothing" was spelt out.
"Is the reason you're still hear because you want to hurt people more?" Yvette asked and through taps the spirit replied "yes", leading Yvette to the conclusion that the spirit they'd made contact with was "a really horrible, nasty piece of s**t".
Before the team had a chance to leave the bar, a large rectangular table moved. While all the team reacted simultaneously, the event wasn't caught on camera. But there was still plenty more to come... 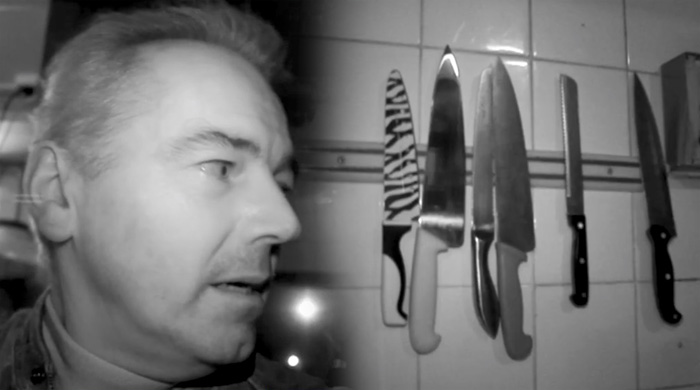 The team reluctantly split up, now slightly on edge after the incident with the chair and the knowledge that something wants to hurt them. With this heightened state of nerves, I'm amazed that Yvette let Karl go to the kitchen on his own. After all, remember what happened last time we saw Karl in a kitchen on his own?
During the last series at Standon Hall, a knife flew across the kitchen and hit Karl in the head. Worryingly, the wall-mounted knife rack at The Fleece was almost identical to the one in the kitchen of Standon Hall. I think Karl realised the knife rack was pretty similar, in fact he made it pretty clear he wasn't too happy with the knives being there and made a point of counting them to make sure none had vanished, like it did in the last series, seconds before hitting him in the face.
But it wasn't the knives that Karl should have been looking out for. After hearing movement all around him, like the smashing of a plate, rattling crockery, and pots and pans rattling, suddenly a glass flew past Karl, narrowly missing his head. "WOW, there's no where that could have come from," said a stunned Karl.

The glass appears to have come from Karl's right-hand side, above head height. Yvette explains, "with everyone else accounted for, this is a great piece of evidence." Although Karl wasn't as excited, "I'm actually not too happy with that, because that was thrown with some force".
Looking very uneasy and saying he felt like he was "being stalked", Karl called in the rest of the team, the final straw being the moment where one of taps turned itself on and trickled water into the sink.
With Yvette, Glen and Stuart now in the kitchen with him, the activity didn't let up. It wasn't long before a wine glass smashed meters behind them as the team trapesed through the pantry in the dark.
It was after this scare that Karl addressed something that viewers of the show have pointed out a lot in recent shows, the fact that it is never pitch black in the locations they film in, "the trouble is, because you've still got these emergency lights on, a lot of people think it's not scary but we've had glasses smash and I think that's brilliant". 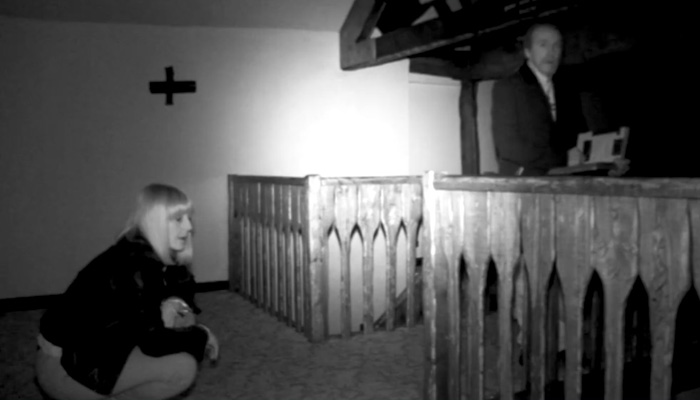 At another point in the evening, Yvette was back in the area of the pub where the chair had been thrown earlier in the day, joined by Fred Batt, the show's demonologist. It was at this moment that we were treated to the first quality Fred moment of the series. Yvette said she could hear what sounded like a heart beat, to which Fred said out loudly, "Lucifer, that can't be you, you don't have a heart. Is that you? Is that you? Are you pretending you've got a heart?"
Later in the same area Yvette and Glen were shocked to find a table had been tipped over over. When they reviewed the footage from a locked off camera which was recording that area, they found the video shows the table rolling over before being dragged along the floor. 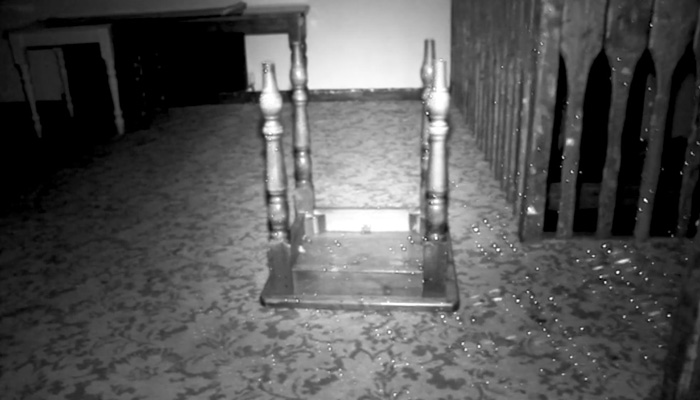 With that, the show ended with Yvette's familiar words, "until next time, sleep tight". And, next time isn't far off as Most Haunted is back every night in the run up to Halloween, including a special at Croxteth Hall on the night of October 31st.
#MostHauntedHalloween continues all week on Really from October 27th. Watch on Freeview (17), Sky (155) and Virgin Media (129), or watch previous episodes of Most Haunted on demand on the UKTV Player.
For reviews of all of the new episodes, plus highlights and evidence from the shows, and to find out when Most Haunted is on next, visit the Most Haunted episode guide.