The Gyrascope: The First Digital Spirit Board 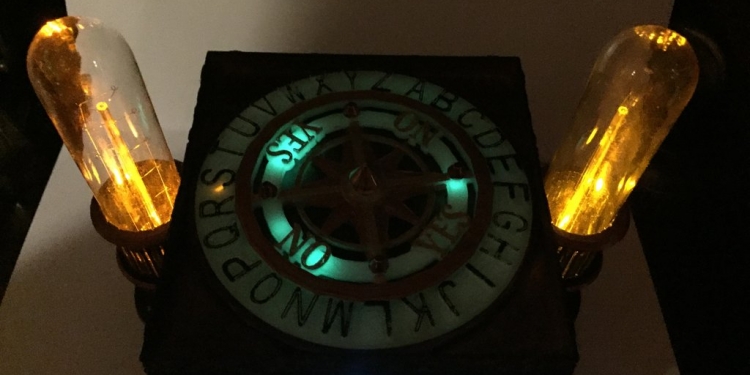 Photo: paranologies.com
I recently came across one of the most interesting looking ghost hunting gadgets I've ever seen online. It's called the Gyrascope and is made by a US company called Paranologies Lab.
The device was being used by a British paranormal research group, Ghosts of London, so I had to get in touch with them and find out a little more about this intriguing piece of kit.
There are currently only five prototypes of this devices in existence. One of which is in the UK and being trialled by Ghosts of London, who are often one of the first to get their hands on the latest technology from Paranologies' workshop. This puts them on a par with other paranormal teams around the world, such as T.A.P.S.
The Gyrascope, like all of Paranologies' products is handmade in the US by experienced paranormal investigators, and is designed to be used as a digital talking board. Of course the most popular type of talking board is a ouija board, which supposedly relies on the energies of those using it to move the planchette across the board and spell out words.
Jason Whitnell from Ghosts of London says, "with this amazing machine you can get the same results as a ouija, yet not have to open up a gateway to dark entities that you simply can't control."
Although the Gyrascope is a more modern, digital version of the classic spirit board, it has the a very vintage and even steampunk look. Stylistically it is very unique.

How Does The Gyrascope Work? 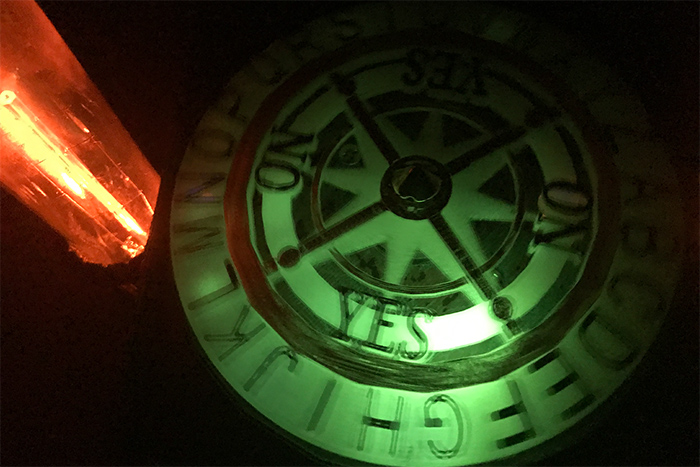 The Gyrascope works in a similar way to a ouija board but without the need for human contact. Instead of a flat board, the Gyrascope has the alphabet and the words 'yes' and 'no' printed around a photoluminescent wheel in the middle of the device. The wheel moves according to changes in static electric fields around it, similar to REM Pods, another ghost hunting gadget.
On either side of this disc is an old-fashioned Edison style light bulb, the tungsten inside the bulbs acts as the antennas to pick up changes in the static field around the device. These type of fields are naturally present around objects including humans, and some believe spirits too.
Jason says that "spiritually it is a fantastic way to help paranormal researchers get the results they are after as it's much easier for the spirit in question to connect with it. People sometimes forget the energy it takes for a spirit to connect with the living and this device is set up to enhance the communication via the static energy that is produced."
Because this device is triggered by static electricity, it is much less likely to give you false readings than most paranormal gadgets which rely on electromagnetic fields. Although similar to static fields, EM fields are generated by everything from mobile phones to wireless doorbells. This increases the chance of interference, something the Gyrascope is not susceptible to.
Once turned on, it takes a few seconds to calibrate, during which time the disc spins anti-clockwise. Once it starts turning clockwise the device is ready to use.
When a spirit comes in to contact or effects the left-hand bulb the wheel stops spinning and a UV light turns on underneath the disc causing one of the letters to become energised and glow in the dark for a few seconds. The glow is bright enough that it is even visible in total darkness.
If a spirit effects the right-hand bulb then again the wheel stops moving but the segments of the disc marked with either 'yes' or 'no' will glow.
Inside the device there are two static sensors which control the spinning disc, these are connected directly to the tungsten antennas in the light bulbs. If a ghost hunter needs to reduce the sensitivity of the device for any reason, then they can simply remove the bulbs.

How Does It Perform?

As Ghost of London are a British paranormal investigation team, of course they've taken the Gyrascope to the infamous 30 East Drive, which is said to be the most haunted house in the England. Sadly at this venue the device failed to impress the paranormal researchers, which only spewed out "gibberish." They did point out that this was probably due to a "very high level of static electricity" which is flowing through the house.
The team advice any ghost hunters who go to number 30 to "check how much energy is coming through those walls," they added "we know the property is haunted, we aren't questioning that as we caught
phenomenal proof. But a word to the wise that property is for want of a better word 'electric'."
Since this initial test of the device Ghosts of London have had more luck. Jason says, "it produced results that simply could not be created by chance. With machines like the Ovilus where sometimes you might be inclined to associate words to questions as loosely as possible to create a result. With the Gyrascope it's almost impossible to do this thus making it invaluable in our opinion."
The Gyrascope is more suitable to group events than casual ghost hunters. Given its size, Jason thinks "it is perfectly designed for groups to sit around a table and fire questions at it."
Not only does this device look great, it's also fully visible in the dark thanks to its unique glowing dial, and it makes a very atmospheric clicking sound as the wheel spins, which I'm sure would add to the mood at any ghost hunt. There's also an ambient blue light, so even if you're using the device without the Edison bulb, it's still easy to locate it in a darkened room.
Jason sums it up nicely by saying, "where we are still on the precipice of paranormal research and still waiting for someone to make a significant breakthrough this device will surely help us in the field." Although there are a few potential improvements that could be made to the device. Perhaps the inclusion of the numbers zero to nine on the disc, and the word "maybe" to simplify the answers.
The device's creator, Jeromy Jones says, "we all have static electricity on us, so the reason why I designed this meter is in hopes that when we pass we can use the static electricity we used to carry with us and it can be picked up by such meters."
I'd like to say a big thank you to Ghost of London for their feedback on the device. If you'd like to find out more about their research and keep up on their progress then be sure to check them out via their official website or Facebook page.
» Find out more about the Gyrascope on Paranologies' official website
Add A Comment
Tags:
paranormalghosts