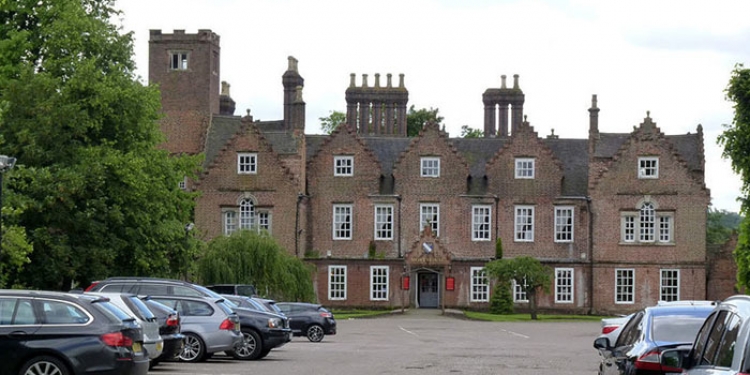 Photo: © Alan Murray-Rust
A historic building in the heart of Tamworth, built in 1572 as a family home in what were once the grounds of Tamworth Castle. The beautiful Tudor mansion, which sits on the banks of the River Tame, was once used as a nursing home caring for old women who were often well to do, but eccentric.
Having been closed for two years, the grade II listed property recently reopened as a pub, after undergoing major refurbishment restoring it back to its original splendour. It now boasts a spacious bar and restaurant, set in extensive gardens with lawns leading to the water's edge.
The house, which once played host to King Charles I, was described by a local historian as "Tamworth's Elizabethan treasure." The red brick mansion has a distinctive embattled tower, mullioned windows and clustered chimneys.
Within the grounds is a brick gazebo built in the 18th century as a summer house by a former resident. The gazebo looks like a small tower, accessible via a flight of stairs, it offers views along the river.

The West Midlands pub is now famous for its paranormal activity, including ghostly apparitions, doors slamming, and even poltergeist activity. The most active area is said to be the embattled tower. A contractor working in the tower in 2007 fled the building in terror after hearing someone walking around above him, despite the tower being empty.
Many guests and staff have witnessed the spirit of a young girl on the third floor in a room which has been dubbed "Emily's room." Others have seen the ghost of an old man in the building. He appears to walk on the spot in a raised area of the restaurant.
In the pub's beer garden, a dark shadowy figure has been frequently spotted walking back and forth between the house and the river. Some believe that this is the spirit of a local woman who worked at the Moat House when it was a nursing home in the 1920s. She's said to have taken her own life and drowned in the Tame, but her family dispute this and suspect she was murdered.
In 2017, some compelling evidence was caught on camera during an amateur ghost hunt event run by the Most Haunted Experience, a spin-off of the long-running, paranormal television show. Throughout their investigation a static camera was left recording on the building's upper floor.
Viewers watching the live feed from the camera online noticed a creepy pram move on its own across the room. The event manager, Jenny Bryant said, "we noticed a pram in one of the rooms moved, but the handle was just out of shot. We thought our viewers might think someone was pulling or pushing it – so we moved it into a more central position in front of the camera."
After moving the pram back, it once again appeared to move of its own accord. You can watch the occurrence as it happened below.
Tags:
paranormalghostsstaffordshire