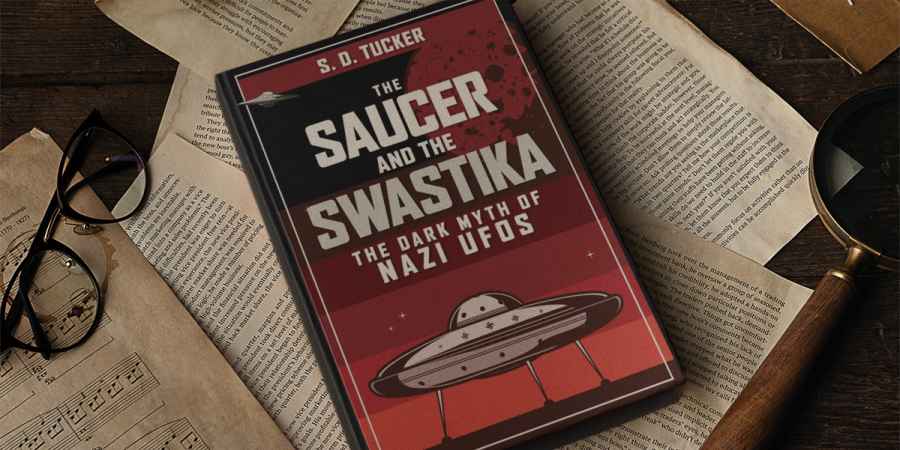 Journalist and 'Fortean Times' columnist, S. D. Tucker, explores the dark myth of Nazi UFOs and Hitler's fleet of flying saucers in his new book, 'The Saucer & The Swastika'.
Tucker has previously written 'Paranormal Merseyside' and the excellent 'Forgotten Science', which touches on some thought provoking questions about life and the nature of existence. In his latest book, which is available from Amazon now, Tucker delves headfirst into a world of myths and conspiracies that surround Hitler and his alleged links to UFO technology.
Some fringe-thinkers claim that if World War II had lasted another six months, then Hitler would have won because Nazi scientists stood upon the very brink of inventing flying saucers. If it were true, squadrons of Luftwaffe spacecraft would certainly have made mincemeat out of British Spitfires and American B-52s.
Despite being an enticing story, it's complete fiction. Yet the sinister myth of Nazi UFOs is surprisingly well developed as Tucker discovers in his journey through some of these seemingly insane theories.
Perhaps the most outlandish of these claims is that Hitler and his chief henchmen didn't really die in 1945, but were whisked away in spirit on flying saucers. It was claimed that the Nazi's had a close alliance with a race known as the Aryans from another star system.
If this weren't enough of a stretch, the claims go even further and talk of escaped Nazis and their indoctrinated offspring standing poised to finish what they started with the help of the Aryans and a fleet of armed flying saucers. Until then, they are said to be hidden in secret Antarctic bases, inside the Hollow Earth, on another planet, or even within another dimension, just waiting for the right time to strike again.
White supremacists around the globe have adopted Nazi ufology to draw the gullible into the wider orbit of far-right ideology. Once you convince someone that the history books are wrong because fail to acknowledge that Hitler helped invent UFOs, then it's not much of a leap to get them to believe that other parts of Nazi history have been covered up or fabricated.
Might the Nazis actually have been right all along? Could the Holocaust have been a total hoax?
The book starts by exploring the strange world of Nazi occultism, the belief that Adolf Hitler was the embodiment of God on Earth, and the myths that surrounded the Third Reich, before looking into claims that Nazi saucer-pilots fought alongside Saddam Hussein in the first Gulf War.
It also touches upon the present-day problem of fake news and conspiracy theories that are propagated online within niche communities of likeminded people, by the likes of David Icke.
These conspiracies may seem harmless at first, but they are not. Is it really the white race's destiny to conquer the icy reaches of space under the banner of the 'Aryan world spirit'? Perhaps not, but the conquest of their victims' inner space, not outer space, in the name of Hitlerism is what these latter-day Goebbels truly desire.
'The Saucer & The Swastika: The Dark Myth of Nazi UFOs' is available from Amazon now and contains bizarre stories, including reports of alien boot-prints whose soles bear swastikas being found in the wake of UFO landings, the leader of America's Nazi Silvershirts claiming to be in psychic contact with men from other galaxies, and Allied pilots being buzzed by fiery glowing 'foo fighters' during WWII.
Find out more at amberley-books.com.
Tags:
bookstopicalufosunexplained