The highly-anticipated fourth season of Netflix's 'Stranger Things' is in production and last week fan's were excited by a teaser trailer that gave some hints about what we can expect from the upcoming season.
Little is known about the new season, which has been delayed by the coronavirus pandemic, and the trailer has just raised more questions. Fans have been speculating about some of the cryptic imagery featured in the clip.
The teaser trailer seems to take us back in time to Hawkins National Laboratory at a point when the secretive government experiment was in full swing. We see several of the child test subjects, all with shaved heads and identical hospital gowns. We also see Dr. Brenner, who we presumed had died after being attacked by a beast from the Upside Down at the end of the first season.
At the end of the trailer we also hear the government scientist address Eleven, before we get a quick flash of Millie Bobby Brown's character confirming that the newly released footage shows us a time when Eleven was being held at the lab.
One YouTube channel claims that there are as many as 37 clues and Easter eggs hidden in the trailer - everything from psychic ability training with a plinko board through to a massacre at the hands of the lab's test subjects.

The fact that the trailer seems to take place prior to the events of season one could indicate that time will play an important role in the new season.
Even back in September 2019 when the new season was first announced, clocks featured heavily. The 2019 clip announcement shows a clock face embedded in a tree trunk in the Upside Down, the clip also included the sound of a ticking clock.
The new trailer opens with a shot of a clock in the lab with the hands pointing to 3 o'clock. This is almost certainly significant, either a time that is meaningful to an incident that occurred at the lab, or a hint at the importance of time in the season. Should we be expecting a throwback to 'Back To The Future' vibes? 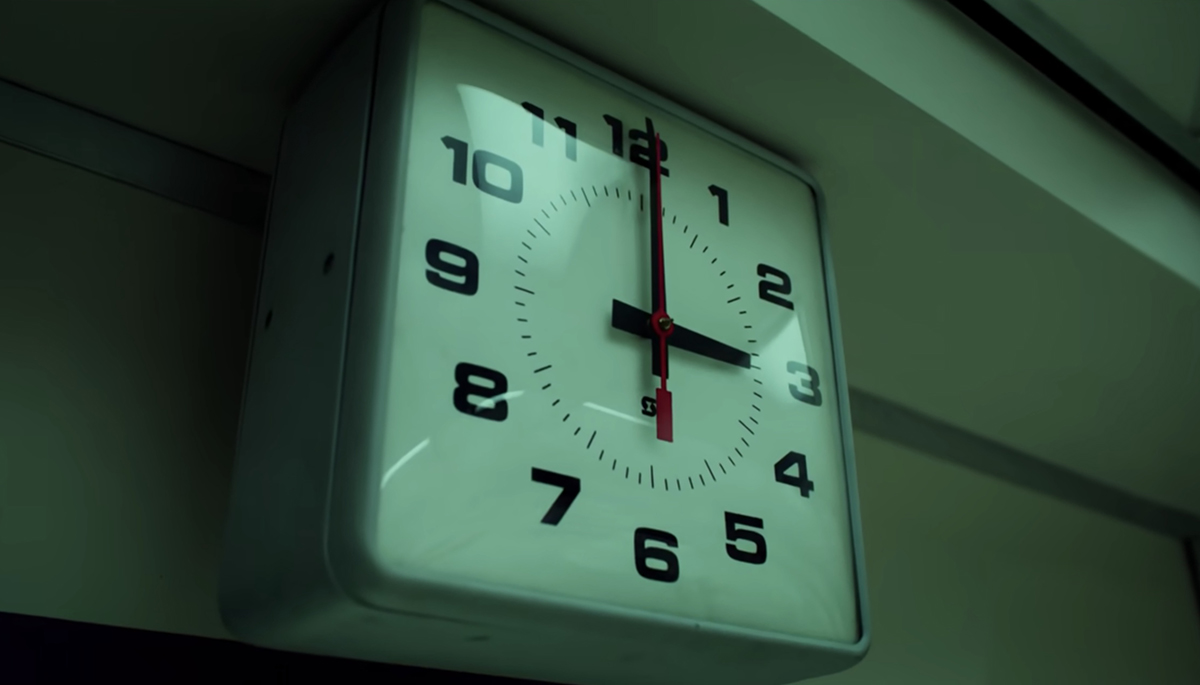 Some have speculated that the clock's hands could also hint at a release date for the season, 12 and 3. December 3?
It's possible, but Finn Wolfhard, who plays Mike Wheeler in the Duffer brothers' smash supernatural series, recently let slip that the fourth season of the show might be released in 2022, not this year as many fans were hoping. When asked about the upcoming new season, Finn said in a video clip "season four, it should be out sometime next year, hopefully," suggesting that a 2022 release date is on the cards.
Thanks to a previous teaser trailer, we also know that Jim Hopper will be returning in the new series, despite the fact that it looked like the character played by David Harbour had met his maker in the season three finale.
The older trailer which dropped on social media on Valentine's Day 2020 with the captions "from Russia with love..." was set to the haunting sounds of 'The Red Army Is Strongest'. In the clip we're shown a winter scene in an unnamed Russian location, where watched on by Russian military, we see Hopper along with several other men working to lay a railway track through the snow-covered landscape.
Another fact we do know about 'Stranger Things' season four is that the show's creators continue to be heavily influenced by 1980s pop culture. For season four the Duffer Brothers' have cast the iconic 'Nightmare On Elm Street' actor, Robert Englund.
Robert follows in the footsteps of other 80s stars including Matthew Modine (Dr Brenner), Cary Elwes (Mayor Kline), Sean Astin (Bob), and Paul Reiser (Sam Owens).
Whatever happens in season four, we know it won't be the last we've heard from Hawkins. In an interview with The Hollywood Reporter, Ross Duffer said, "season four won't be the end. We know what the end is, and we know when it is."
Matt Duffer added, "we've had a lot more time to work on the scripts. For the first time, we have all the scripts written and we're able to look at it as a whole piece and make adjustments."
Whether this means a fifth season or perhaps a one-off feature length finale, only time will tell.