The Skirrid Mountain Inn: The Most Haunted Pub in Wales 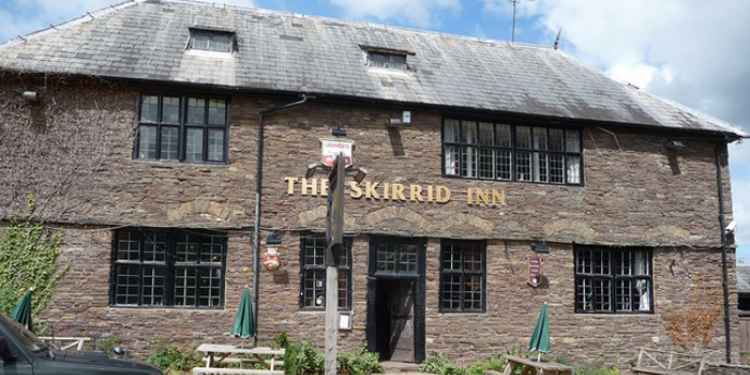 Photo: © Jeremy Bolwell
The Skirrid Inn is said to be the oldest pub in Wales, with over 900 years of brutal executions, witchcraft, and suffering, it's no wonder this ancient pub, located in the beautiful Brecon Beacons, has such a reputation for being the most haunted too.
The inn, located in Llanfihangel Crucorney, five miles from Abergavenny, was first mentioned in records in 1110, around the time of the Norman Conquest. The pub has been said to play host to numerous Kings from both Wales and England, who would have used the ancient mounting stone in the forecourt to dismount their horse.
It's said that it was here that Welsh ruler Owain Glyndŵr lead his revolt against England and King Henry IV. Rallying his supporters at the inn in the shadow of the mountain from which it gets its name, before raiding nearby English settlements. The wounded and dying soldiers would return to the Skirrid Inn after the battles.
The inn is most famous for its links to the evil and infamous Judge Jeffreys, the Hanging Judge. Although any documentations of these claims either never existed or have been lost over time, local legend states that he sat in judgement at the inn.
Over a period of many years the first floor of the inn was used as a court of law and as many as 180 prisoners were sentence to judicial hanging in the 17th Century. The punishment was carried out at the inn itself and above the building's dark oak staircase, a 900-year-old beam still exists just outside the courtroom, which shows the marks from the hangman's rope.
Although there is a lack of hard evidence of Judge Jeffreys' holding court at the inn, it is known that he dealt with cases in the area following the Monmouth Rebellion. So, it is possible that on his travels he may have at the very least stopped at the inn or may even have heard isolated cases here.

Is The Skirrid Inn Haunted?

The inn is frequently visited by paranormal investigators and has featured in television shows such as 'Most Haunted' and 'Extreme Ghost Stories'. Staff and guests have reported a sinister atmosphere, hearing disembodied footsteps and cackling laughter. They've experienced sudden and extreme drops in temperature, and the former landlady Heather Grant says she witnessed a menacing shadow, "I often see a shadow walking up the stairs and along the corridor."
Others have reported smelling perfume from an unknown source, and hearing the rustling of a woman's dress and the sound of soldiers marching. Perhaps these are the ghostly echoes of Owain Glyndŵr's men.
When Heather put the pub up for sale in 2002, she told the BBC that glasses started mysteriously flying in the kitchen. She said, "there has been lots of spooky goings-on since I've been here, I live on my own and when I first moved in I have to confess that I was pretty unnerved by things happening."
The Skirrid Inn's most famous ghost is that of Judge Jeffreys, his spirit is still rumoured to walk through the first floor, which was once occupied by the courtroom and the condemned man's cell that has now been converted into a store room.
There have been plenty of apparitions sighted in the pub too, including the spirit of a local clergyman, believed to be called Father Henry Vaughn. In the courtyard a woman in a white dress has been spotted on numerous occasions. And John Crowther, a former convict who was sentenced to death for sheep rustling has been witnessed.
The most active part of the building is said to be one of the guest rooms. It's here in room 3 that the spirit of Fanny Price has been reported. It's claimed that she worked in the inn during the 18th Century and died of tuberculosis at the age of 35.
Add A Comment
Tags:
paranormalghostswales