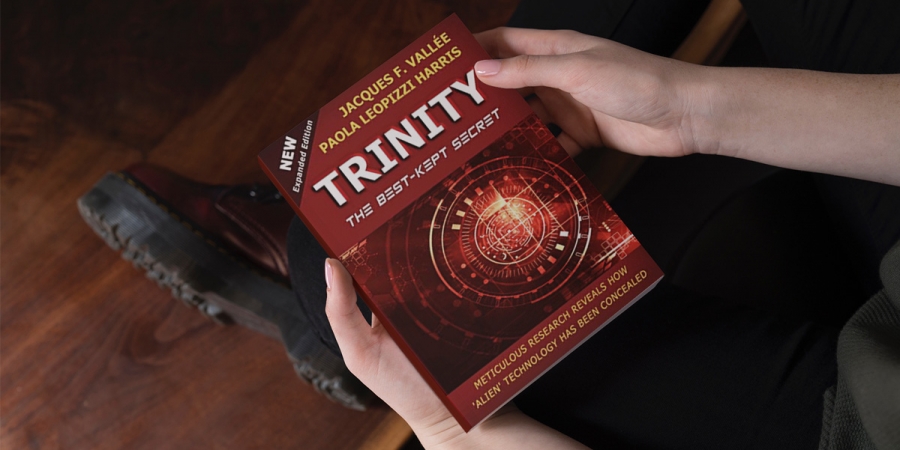 Hard evidence has existed since 1945 for the actual recovery of unidentified flying craft in the United States, according to a new research book.
'TRINITY: The Best-Kept Secret', which is written by two seasoned analysts of the global patterns behind the UFO phenomenon, is available from Amazon now.
Italian investigative journalist Paola Leopizzi Harris and French-born information scientist Dr. Jacques F. Vallée have teamed up to uncover the details of a New Mexico crash in 1945, fully two years before the well-known incident at Roswell and the famous sighting by pilot Kenneth Arnold in 1947.
Over several site investigation surveys Harris and Vallée reconstructed the historic observations by three witnesses, two of whom still living, who described to them the circumstances of the crash, with details of the recovery of a nearly-intact flying vehicle and its occupants by an Army detachment.
Combining their long experience in field research around the world, the authors have documented the step-by-step efforts by the military to remove the object, an avocado-shaped craft weighing several tons, from the property where it crash-landed during a storm. Surprisingly, the literature of the field only includes a few passing mentions about the case, and only one (foreign) TV documentary has mentioned it, but the correlation between the crash of the extraordinary object and the historic explosion of the first atom bomb at White Sands, some 20 miles away, has been missed.
Harris and Vallée suggest that the correlation is significant for physical, geographic and biological reasons, quite apart from the obvious strategic implications. The witnesses were able to observe not only the actual crash of the object on their property but every step of the military efforts to lift it and take it away. Fearing retaliation, they remained silent for some 60 years about what they had seen and done over those nine days at the site while the recovery was proceeding.
When placed in the context of the history of chemical and physical analysis of retrieved UFO debris--an area where Harris and Vallée  and their team have long collaborated—the devices observed by the witnesses raise a number of very important scientific questions.
The Honorable Paul Hellyer, former Minister of National Defence of Canada, has stated: "Paola Harris and Jacques Vallée have spent much effort doing field research on location (…) It is now time that their discovery be revealed to the world."
Christopher Mellon, former deputy Assistant Secretary of Defense, called the data "fresh reason to believe that our government is concealing physical proof of alien technology. Read the book, and if persuaded, join the millions of other Americans seeking a straight answer."
And Professor Paul Hynek added that the research "reveals a new UFO history."
'TRINITY: The Best-Kept Secret' was released in September 2022 and is available to order from Amazon now.
Tags:
booksunexplainedufos