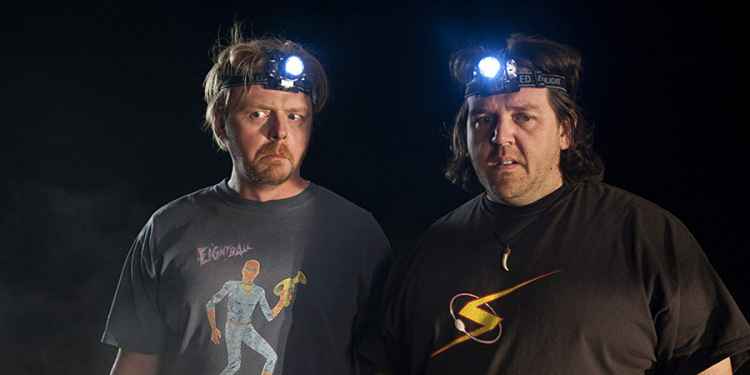 British comedians Simon Pegg and Nick Frost are no strangers to the world of the paranormal and the weird. In 'Shaun Of The Dead' the duo battled the living dead, they befriended an extraterrestrial in their 2011 movie, 'Paul', and their 2007 comedy 'Hot Fuzz' has many references to strange and quirky occult practices.
For their next project, the pair have gone all out supernatural as they take on the roles of paranormal investigators in their upcoming television series, 'Truth Seekers'.
The project was first announced last year and few details have been released since, but fans are already excited at the thought of seeing the duo hunting ghosts, but will they be more like the Ghostbusters or Scooby and Shaggy?
Speaking to Variety, Pegg said that each half hour episode of the comedic horror series will follow three ghost hunters as they attempt to solve a different case of the unexplained. He said, "each episode is going to be an adventure, a potential haunting or something."
He explained that the trio will start their journey into the supernatural as a "small business venture," but he says that "it will expand as the series goes on to be something far more global. It's a language everyone understands, the mystery of the unknown."
The series is one of the first productions to be devised by Pegg and Frost's newly formed independent production company, Stolen Picture.
The duo have plenty more up their sleeve, they're also working on the comedy-horror film 'Slaughterhouse Rulez', which is set in a posh private school. Pegg says that the movie is "very satirical, very much about the UK selling itself off." He teases that the movie is "about fracking as well, and that unleashes some awful subterranean demon."
Not much is known about 'Truth Seekers', we don't yet know where the show will air or when it will be released, but we can't wait to find out more and will let you know when we hear any news.
Simon and Nick are best known for their iconic roles in the three flavours Cornetto trilogy, a series of comedy films directed by Edgar Wright, written by Wright along with Pegg. The trilogy consists of 'Shaun Of The Dead', 'Hot Fuzz' and 'The World's End'.