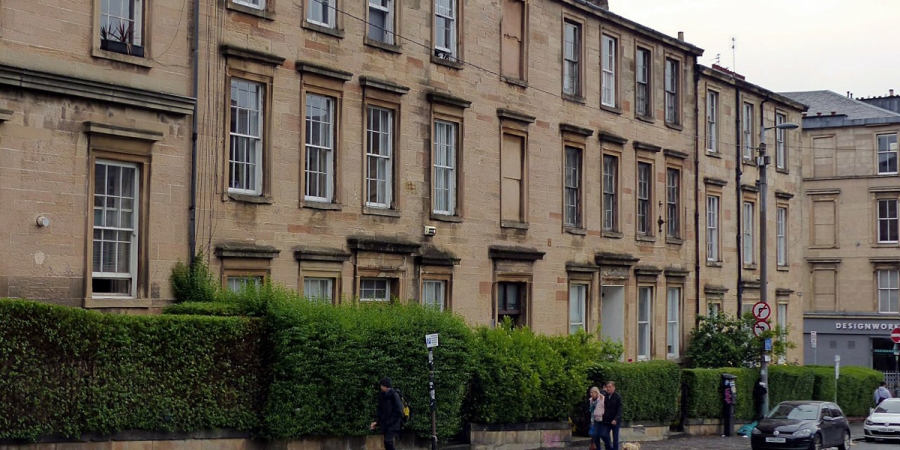 Photo: © Alan Murray-Rust
In the final episode of BBC Sound's supernatural podcast series, 'Uncanny', Danny Robins gave listeners some eerie updates on some of the series' most enthralling paranormal cases, including the much-talked-about, Luibeilt and a potential link to a haunted house in Glasgow.
This was the story of Phil Macneill who stayed the night in Luibeilt, a remote cottage in the Scottish Highlands shortly before Christmas 1973. The cottage, which now lies in ruins, was actually a bothy, a building that provided shelter for climbers and walkers.
At first glance the bothy appeared to have been suddenly abandoned, but Phil and his fellow climber friend discovered that something very frightening lurked inside as night fell.
One possible explanation for the poltergeist activity that Phil witnessed was proposed by Danny earlier in the series. The podcast host told us about the suicide of John McAlpine, a 40-year-old deerstalker or gamekeeper who lived in Luibeilt. The incident was reported in the Aberdeen Weekly News on April 26, 1890. The report states that McAlpine went out for a walk in the morning in his usual health, but later in the day his wife found in hanging from a rope tied to a cross beam.
Danny told listeners, "there is a lot more to come out about this case, not only about Luibeilt, but also about Gibson Street where Phil had his apartment. We will return to this with more revelations." True to his word, Danny delivered these revelations in the podcast's final episode, which you can listen to on BBC Sounds now.
One new piece of information relating to John McAlpine came from an online climbers' forum. Danny said, "the climber who posted it talked about a sighting on a hillside near Luibeilt of a man in tweeds traversing the heathery slopes. He says, 'to my eye, he looked like a gamekeeper.' When the climber looked back, there was nobody there."
Danny speculated that this could be the mournful spirit of John McAlpine continuing his job, even after death, but also posed another explanation, "...or was it just a modern day gamekeeper with a taste for old fashioned clothes?"
We'd already heard about a series of bizarre and terrifying incidents that Phil experienced around the same time at 39 Gibson Street, but now, thanks to some research from listeners, some new information potentially ties these two seemingly unrelated properties together.
One last update presented in the final episode related to this Gibson Street property. Danny told us there's something we should know about this house. He explained, "we've learned that there was a one-year-old child living in 39 Gibson Street in 1851. A child who would have been 40 in 1890, the year that John McAlpine committed suicide in Luibeilt."
At this point you may be thinking this is just a coincidence, but there was still one jaw-dropping twist to come. Danny dramatically told listeners, "that child's name was John McAlpine."
This new information could suggest that Phil, the climber who had experienced life-changing paranormal activity at Luibeilt lived in the childhood home of John McAlpine, 39 Gibson Street. Furthermore, both Phil and John McAlpine visited Luibeilt, the place where McAlpine ultimately took his own life.
The final episode also brought listeners updates on the case of Hannah Betts' and new information relating to the existence of a vicarage that stood close to Hannah's haunted childhood home in Victorian times. This information is particularly significant as one of the reported phenomenon in the house was the unexplained sound of a Victorian-sounding church sermon coming through the family's baby monitor.
We also got an update on last week's case. Danny answered listeners' questions relating to the two men who stormed Tanfield House, where a haunting seemed to have empowered Patty to fight off the intruders and potentially save her housemate's life. We now know that these two men were the jealous ex-boyfriend of Patty's housemate, and his younger brother.
The rest of the episode focussed on what has been perhaps the most gripping case featured in the series, the story of Ken, a student living in university accommodation in Belfast who experience what he describes as pure evil. Danny returned to room 611 with new information, new witnesses, and more ghostly goings-on as described by Ken himself.
The episode ended with an announcement from Danny that 'Uncanny' would be returning in the future for a second season. He also told listeners to "watch this space" for a new project that will focus on another case like 'The Battersea Poltergeist' where Danny will explore the story through multiple episodes, through drama and documentary.
You can find out more about Phil's story and the other cases in the series here. If you've missed any of 'Uncanny', you can listen to all episodes on demand now on BBC Sounds.