This article is more than one year old and was last updated in March 2022. 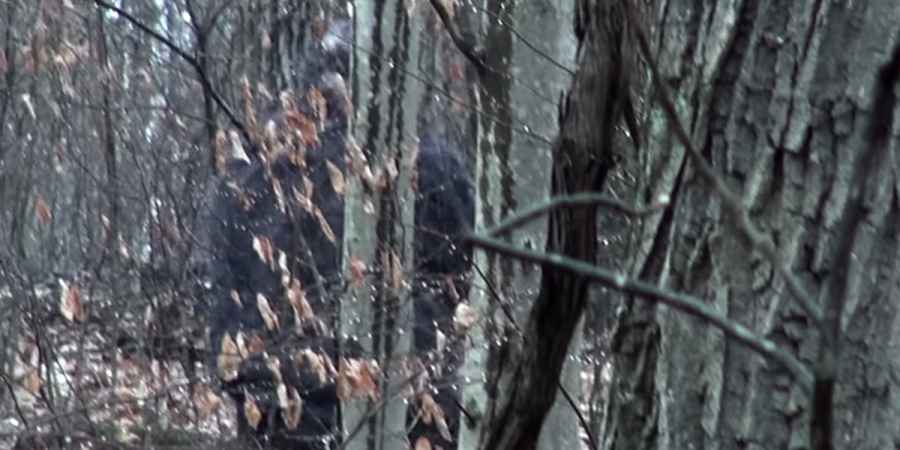 Jayne Harris, Ciarán O'Keeffe, Barri Ghai and Deborah Davies return for a final time this series. The panel of experts, a mix of skeptics and believers, will give their opinion throughout the show on the ghostly goings on and bizarre incidents all captured on CCTV, on mobile phone by members of the public, or on camera by paranormal investigation teams.
This week's episode of 'Unexplained: Caught On Camera' is the final episode in the show's second series, but as always is packed full of a selection of strange happenings caught on camera, including a man from Ohio who claims to have captured Bigfoot in his snowy video footage, a stinking creature washed up on a beach, plus an investigation in a clown motel where the team captured more than they bargained for on camera.

Nathan Gray was out filming the winter scenery with a drone in Salt Fork State Park in early-2020, but was surprised to see a strange dark figure walking through the forest below. Intrigued by what he'd seen on the drone, he ventured into the forest himself. Armed with a camera he caught what he believes to be the Ohio Grassman on film. The creature is also known as Bigfoot or Sasquatch.
After watching the clip, Ciarán said, "legends come about because there is an element of truth initially, and that's what we're seeing with Bigfoot. There is an element of truth going back to the sightings of these enormous grizzly bears in that particular area of America."
But Deborah says, "I think there's been too much evidence now, over the years, to show there is definitely something wandering around in those forests there."

Huge Sea Creature Washed Up On Ainsdale Beach In Liverpool

Next we meet beach ranger Tara Davies, who found something unusual washed up on her local beach back in 2020. At the time locals were perplexed as to what the creature that Tara described as a "black mass" actually was. It seemed to have flippers, fur in some places and even hooves. Tara said, "it just looked like so many different creatures tied up in one."
Having seen the video, Barri said, "the majority of the Earth's oceans have never been explored and it's not surprising then that there can be so many different species and unidentified creatures still lurking in those depths."
Ciarán thinks that there is a "perfectly natural, animal explanation" for the sighting. Stephen Ayliffe, Senior Advisor at Natural England, agrees with Ciarán. He told the Liverpool Echo, "we can confirm that an animal in a poorly decomposed state has washed up on Ainsdale beach and whilst the identification of the animal is unconfirmed it appears to be a species of whale."
Deborah said, "is this a whale? No, whales don't have hooves. Is this a dead cow that's washed up? Well, cows don't have flippers. So it kind of confuses your brain when you're looking at it, because you just can't make out what exactly it is. To me, this is a mythical creature."

Creepy Clown Moved By A Poltergeist In Nevada

Celia and Johnathan from the YouTube channel, Paranormal Voyages caught something unexplained on camera while investigating a creepy clown motel deep in the Nevada desert in 2019. It was here that the duo encountered a life-sized clown doll that is said to move its hands and the investigators weren't disappointed. Towards the end of their investigation, one of the doll's hand slid off of its knee, moments later the other hand did the same.
Barri said, "I'm completely terrified of clowns, it's probably my biggest phobia and I would never investigate the Clown Motel on my own," but Deborah says, "I think clowns are probably subject to a lot of bad press to be honest with you. A lot of people are very very scared of clowns, I think it's because they look half-human-half-monster."
As for the clown moving in the clip, Jayne said, "it may be that those hands were gradually sliding from the knees throughout the evening and they just naturally fell, but the timing does seem a bit odd."
This episode marks the end of the current series of 'Unexplained: Caught On Camera'. If you missed any of the ten episodes you can watch them on demand on Discovery+.