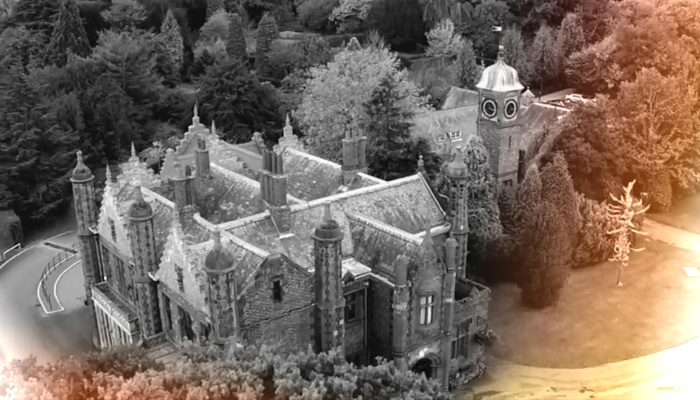 This week Yvette Fielding and the Most Haunted team visit Walton Hall, a beautiful, Grade II listed, Elizabethan-style family home in Warrington, set in acres of glorious gardens.
Built in the 1930s in the Lancashire countryside, the hall was once home to the Greenall family, the famous brewers of Warrington. Sir Gilbert Greenall, first baron and member of parliament. After his death, the hall was passed on to his son who lived there until his death in 1938 and in 1941 the house and ground were purchased by the Warrington Corporation.
Before the existing building was constructed, there stood Old Walton Hall, which was believed to have caves underneath and tunnels which led to the local cemetery, which was the location of one of the oldest graves in Warrington, dating back to 1207. 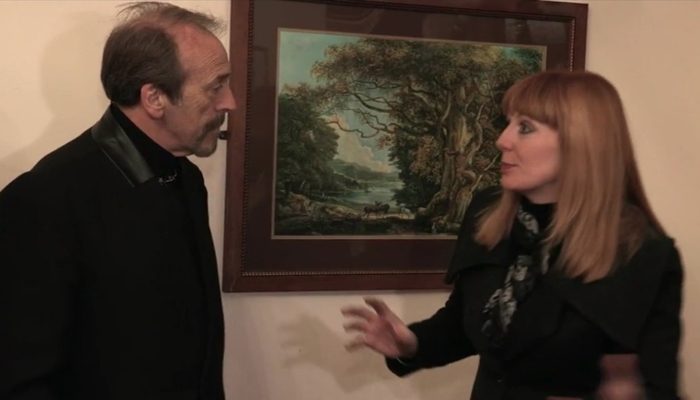 Walton Hall is said to have a few ghostly residents, some are friendly, some are definitely not.
The most common reports are of the sound of children crying, laughing and running around various parts of the host, most commonly on the stairs. It's said that a little girl died in this area and her ghost has seen been seen here, she's also said to have pushed visitors on the stairs.
The show's resident skeptic, Glen Hunt isn't so sure, he said, "once you hear a story about something there's always that thing in your mind, is it a self perpetuating myth?" However, he heard the sound of a baby cry himself earlier in the day, although not all of the team heard the sound which presented itself while Yvette was recording a piece to camera, the sound is clearly audible on the footage.
Another of the house's ghosts that of Lady Daresbury, the wife of Sir Gilbert Greenall. It's believed that she died in the bathroom that adjoins her bedroom, and since then she has been haunting her rooms. The legend states that if she doesn't like you, you'll be sure to have an unpleasant experience, she might even try to push you out of her room.
Glen says, "we must be really nice people, because we haven't been turfed out yet."
Men in uniform have also been spotted on numerous occasions around the house, despite it being completely empty. While other visitors have reported seeing the ghost of a child who died in a bath. 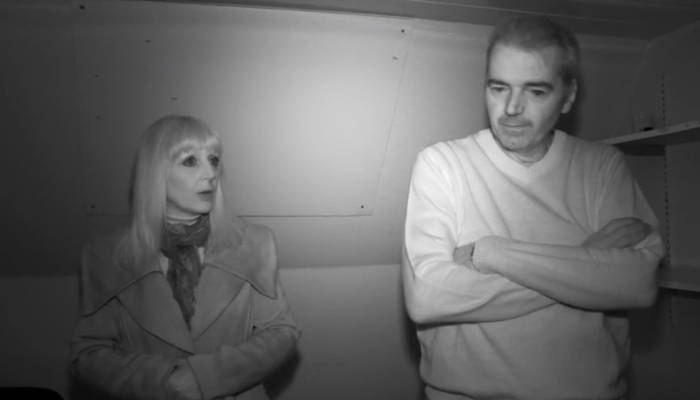 As always the team split up. The show's demonologist Fred Batt went out in to the grounds with Eamonn Van-Harris, sound man Darren Hutchinson, and Gregg Smith on camera. They set up base in an old bandstand and Fred called out to the spirits as Eamonn attempted to capture some ghostly voices on the laptop. However, the experiment proved to be pretty unsuccessful.
Meanwhile, Yvette had a little more luck. She was in the office building with Glen, Karl Beattie, and camera man, Stuart Torevell.
Straight away they started to hear knocking sounds and Karl reported having an odd stomach ache. Yvette started calling out to the spirits and encouraged them to answer with one knock for no, and two for you.
Using this technique, the team manage to deduce that there were four spirits present, one of which was murdered in the 1800s, he was stabbed in the stomach.
The tapping sounds escalated and then Karl notice that they sounded like the tune of 'Ring a Ring o' Roses'. Yvette put this to the test and asked the spirits to join in as she sung 'Twinkle Twinkle Little Star'. To the team's surprise, the knocks kept time.
Yvette asked skeptical Glen what he though of this, "yes, it's happened. Yes it was in rhythm with you, but because you can't see it, you can't feel it. I'm frustrated because I want it to be something we can quantify."
Several times Karl and other member of the team heard what sounds like a baby crying in this building, at time the sound seemed to be coming from the walls.
Eventually Yvette started to feel uneasy, "I think whatever it is is messing with us," and they headed back to the main house. 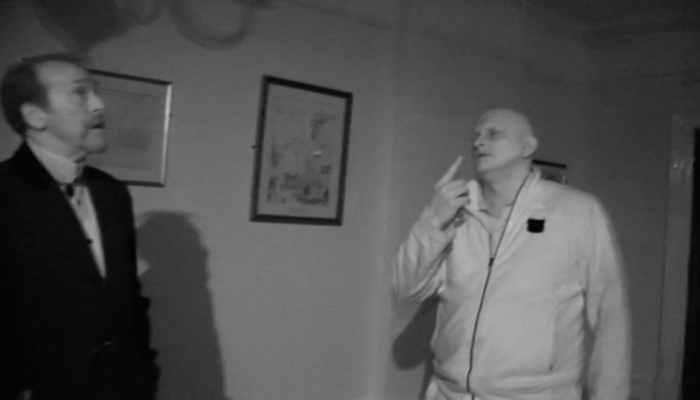 Fred and Darren were now back indoors and joined Stuart in Lady Daresbury's bedroom. They got quite excited when they noticed a ceiling fan had started spinning on its own accord. But, these type of fans take a surprisingly long time to slow down, it's more likely that it was already on and just hadn't stopped yet.
Fred even said he tried the light as they came in, the switch for the fan was the one nearest the door next to the light switches, so it's quite possible that Fred accidentally turned it on albeit briefly and it was still slowing down. 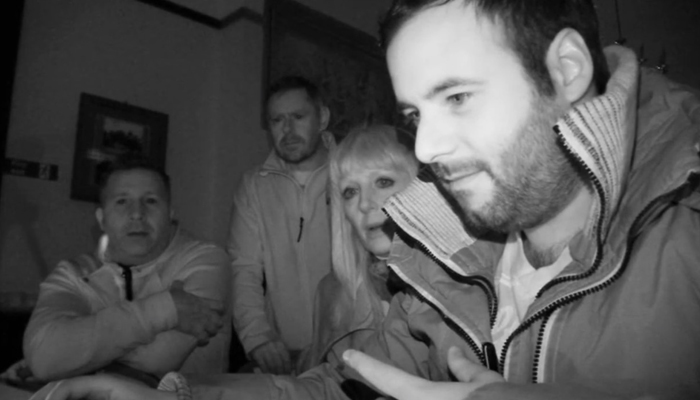 Meanwhile, downstairs Eamonn, Gregg, Glen and Yvette were trying to catch some EVP on the laptop. Yvette called out to any spirits present, left a gap in between her questions and then they replayed the recording.
The audio seemed to contain what sounded like loud breathing into the microphone, almost like a loud growl. But personally I think it sounded like a loose or faulty mic cable.
While I like to remain openminded, as the episode went on they caught more and more of this odd sound, which just had me even more convinced that it was nothing more than faulty equipment. 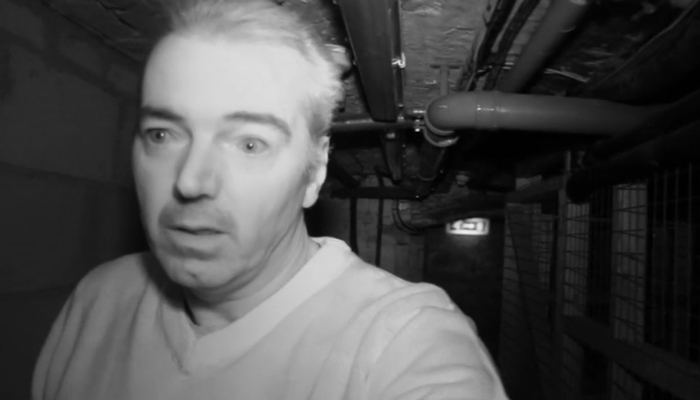 Karl has decided to go down in to the cellar on his own. As soon as he walked in her heard a door slam. A few minutes later he thought he'd identified which door, so he set up his camera and called out, "if you're here, shut the door," seconds later the door swung shut.
Later in his vigil, Karl said he heard a noise coming from a beer barrel which he claimed was shaking, although it couldn't be seen on camera. And, towards the end of the episode, something slammed a door closed into Karl.
For reviews of all of the new episodes, plus highlights and evidence from the shows, and to find out when Most Haunted is on next, visit the Most Haunted episode guide.