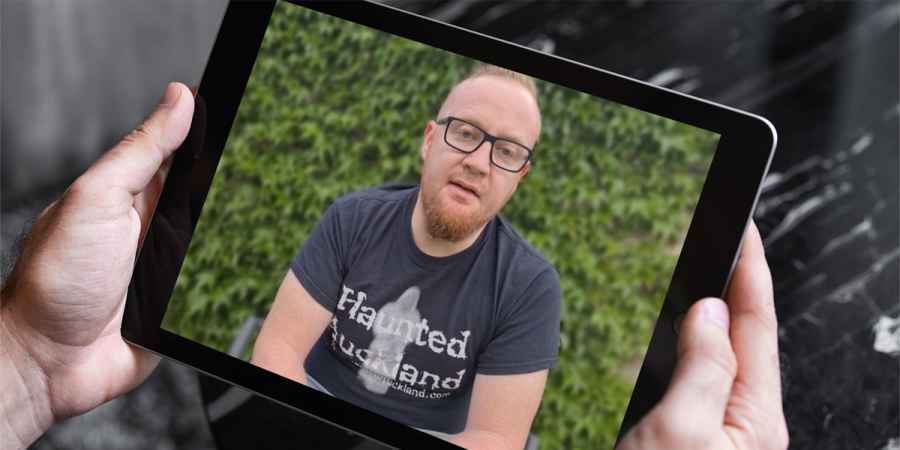 What does the paranormal mean to you? That's the question that Haunted Auckland & Paranormal New Zealand have been asking ghost hunters from all around the world.
This question may seem simple at first glance, but when you start considering your answer it becomes clear that it can run quite deep, as the 55 paranormal investigators found out when they answered the question for a Haunted Auckland's video.
The New Zealand based paranormal teams montage brings together over 50 investigators from all around the world. The team wrote, "we thank them (and the many others that weren't featured here), for all their long hours and late nights of hard work in helping us find the answers we all seek, in this mysterious and fascinating world we live in."
The video of course features Aimee Peterken, Sam Collier, Matthew Tyler and Mark Wallbank from Haunted Auckland & Paranormal New Zealand. Mark from the team said, "the paranormal for me, it's an adventure to seek out answers for myself." He adds, "it's also about hanging out with mates and having a fun time doing it. I've been doing this since I was 10 years old, I'm now 53. I have just as many questions now as I did back when I was 10, but I'm having a blast finding out."
Team member Aimee said the paranormal is "something that often can't be repeated even when you want it to be, even when you've got all your equipment there it's always that moment when you're looking the other way."
Psychic medium, Mary Marshall, gives her take on the paranormal. She says, "it's a fascinating and enthralling combination of science, metaphysics, history, culture. All the phenomena that makes up what is considered paranormal is quantumly entangled, there's a universal connection. The paranormal is fun, exciting, transcending, scary and very, very real."
Other investigators featured in the clip include Beth Darlington from Access Paranormal, Jacqueline Dixon from Paranormal Path, and Miki York from UK Haunted.
Also look out for the Adelaide Haunted Horizons Ghost Tours team, as well as, Chicks & Spirits, Nightwatchers Paranormal Australia and the Midnight Paranormal Society.
Mark Kenny from West London Paranormal also features in the video and sums it up pretty succinctly. He says, "for me the paranormal is finding that one bit of evidence, that one bit of evidence that can change someone's mindset."
The clip also includes thoughts from a few other British investigators, including Justin Clifford and Martyn Stewart from S.O.S Paranormal based in Somerset, paranormal writer Darren W Ritson, and Scottish Paranormal's Ally Reid.
From the other side of the Atlantic, Connor Biddle from the US YouTube channel Paranormal Encounters also attempted to answer the question. In the montage he asks "what does the paranormal mean to me? It's a collection of fascinating and peculiar things without an explanation for, which science has no ability to prove."
Due to the success of the first video, the Haunted Auckland team are giving other investigators the chance to ponder the question and share their thoughts with the wider paranormal community. You can find out more about getting involved and submit your 20-45 second clip via Haunted Auckland's official Facebook page.
Tags:
paranormaltopical