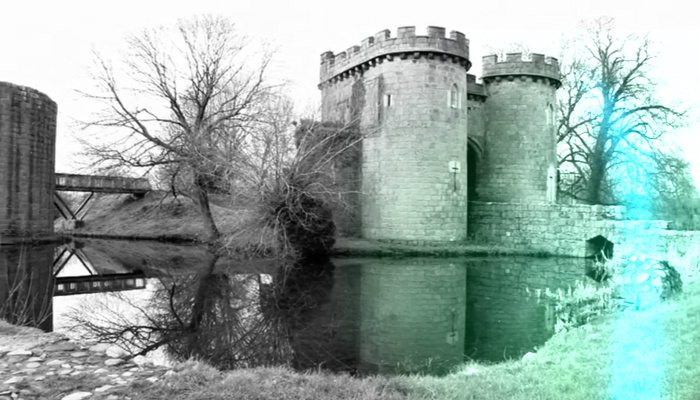 Once again Yvette Fielding and her ghost hunting team visit one of the most haunted locations in Britain, this time they investigate a medieval castle in Shropshire, with more than 3,000 years history murder and treachery.
Whittington Castle in Shropshire was originally constructed by King Offa as a stronghold, which was protected by a moat. Today much of the castle is in ruins, and only a couple of pools of the moat can still be seen. The parts of the structure that remain date back to 1222, when the castle was rebuilt.
The castle would have played a role in the Civil War. It was loyal to the Royalists until Oliver Cromwell's men took it by force in 1643. The castle is even rumoured to be home to the mythical Holy Grail. 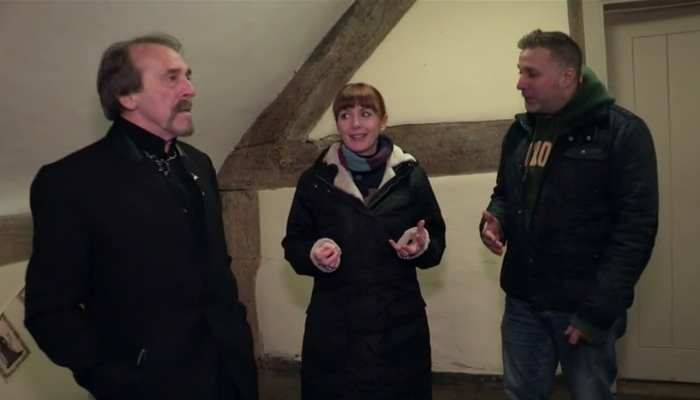 Like most castles, Whittington has its fair share of ghost stories. Locals have reported seeing the faces of children through windows which vanish when they look again, as well as hearing screaming coming from the castle's towers.
In an area that was once used as a courthouse, many people feel depressed and it's no surprise as so many people would have been tried, convicted and even sentenced to death here hundreds of years ago. Visitors to the courtroom have reported feeling icy blasts of cold air hitting them from an unseen force. People have heard marching footsteps, singing, and whistling here. There are also several results of poltergeist activity.
It's rumoured that the original prison cells are beneath the courthouse, but were filled in to save the castle's foundations in Victorian times. But, during Yvette's initial walk around the castle with the show's contrasting experts, skeptical Glen Hunt and demonologist Fred Batt, Glen pointed out that there's no way of knowing if the cells really existed and is probably just hearsay.
Fred, however is more convinced, he says "you've got to go by hearsay, so underneath this there's got to be cells."
In a room which is now a library, an ancient well can be seen under a glass cap. It's said that a young boy was killed by being thrown down the well. Ever since his spirit has been seen in this area of the castle, where it is said to pass through walls. His cries have also been heard in the castle in the dead of night.
Glen says that it is unlikely that a boy would have been pushed down the well and left to die as this would have contaminated the water supply for the whole village.
Outside, in the dried up moat, a coat of armour was once discovered which was dated back to the civil war era. Some say its owner is now a ghostly soldier who is seen walking the castle.
The ruins of small stone turret is also said to be "very haunted". Visitors have reported seeing full blown apparitions here and is said to be the home to a very negative entity.
Yvette said that the walk around was a too quiet, "a lot of the locations that we do these walk arounds in, we start to hearing knocking and banging and we haven't heard anything."

Time To Split Up 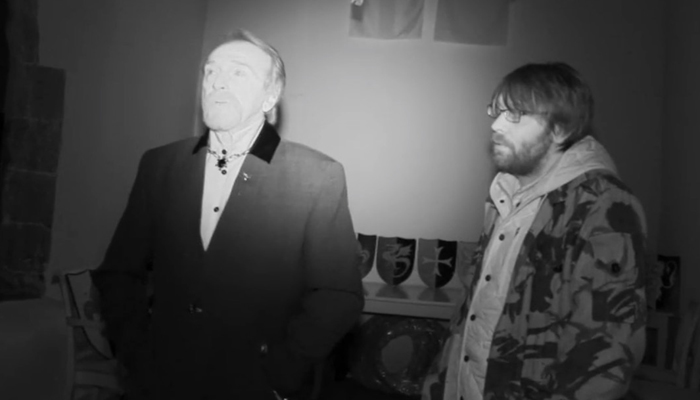 As always, the lights were turned out and the team split up in order to start their night-long investigation. Fred headed to the courtroom with cameramen Darren Hutchinson and Stuart Torvell.
Darren and Fred being together often leads to an amusing exchange and this episode didn't fail to disappoint. Fred started talking about the castle's history and its legends of dragons and witches, "the last dragon, the last Welsh dragon was actually in this area. A red dragon. There was a red dragon and a white dragon..."
Darren, looking confused, asked, "is that not just folklore?"
Fred stuck to his story, seeming to believe that dragons actually once existed, "well, yeah, it could be but it's well documented." Fred continued, "there was this dragon guarding a treasure trove, gold and jewels and this chap who knew about the dragon came to the earl here and he wanted permission to kill it to get the jewels. He gave him permission, he killed the dragon but then the earl took the treasure trove of jewels which is meant to be here somewhere, it's meant to be buried in this castle grounds somewhere."
Darren, still unconvinced simply replied, "OK." 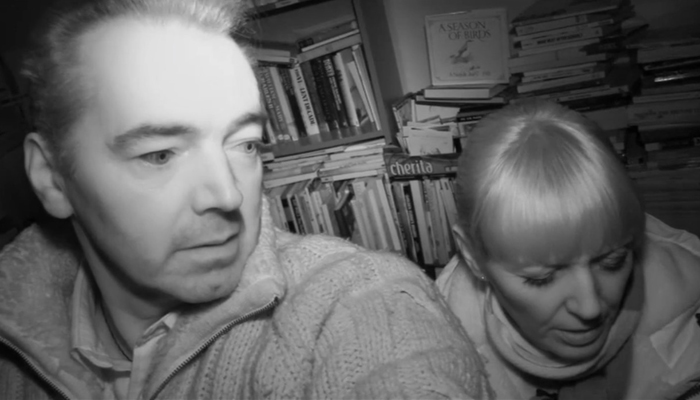 Meanwhile in the library, Yvette and hubby Karl were sneaking around in the dark. Apart from a minor incident with a pigeon, the duo weren't in the library for long. Soon after entering they heard noises coming from upstairs, and went to investigate.
Once upstairs, they initially found the upper floor a little disorientating and disconcerting. In a store room they heard plenty of rustling and tapping. They then headed to the armour room where they experienced banging and rumbling.
Later the pair were in the courthouse, where they had a classic Yvette and Karl row. Yvette was calling out to the spirits, "can you effect Karl? Can you push him or slap him across the face." Karl questioned why Yvette always picked on him, she said he'd been bad. Continuing to talk to the spirits, Yvette said, "he's done very bad things and he needs to be judged. He's a very bad man." 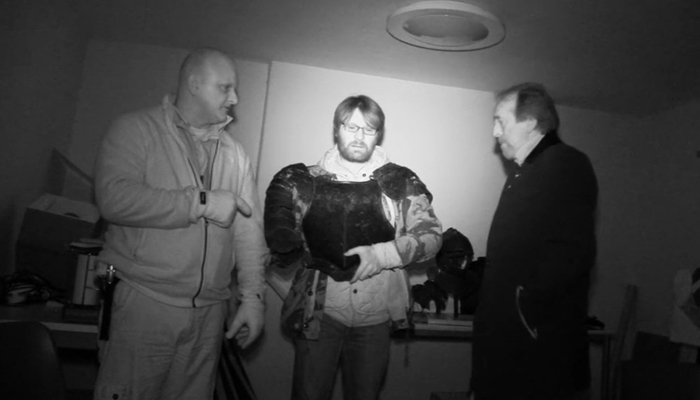 Later in the episode Fred, Darren and Stuart were in the armour room. Darren was channeling a civil war solider by wearing the chest plate of the armour found in the moat. Darren said "I feel strangely at peace." Fred pointed out that Darren has the same beard and hair as a civil war solider, he's right.
But, Darren wasn't at peace for long, a few moments later he toppled backwards, Stuart had to catch him and sit him down on a chair. Trying to recover, Darren said, "I'm properly lightheaded."

Back In The Library 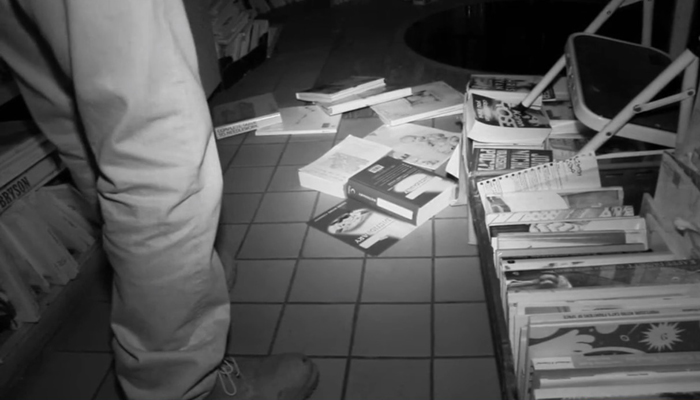 Later Karl and Stuart were investigating the upper floor and went back into the castle's library. When they walked in they noticed several books on the floor which appeared to have fallen off of a bookshelf. Karl picked the books up and the pair left the room, but as they were leaving another book was thrown onto the floor.
Luckily the team has set up locked off cameras around the castle, one in the armour room, the stairwell leading into the gallery, and the gallery. There was also a camera in the library, this revealed how the books had actually fallen.
The first few books fell from the shelf as the timestamp on the recording hit 18 minutes. At the 55 minute mark another book fell, followed by one more at the one hour, 42 minute mark. On all three occasions there was no obvious indication why the books fell. 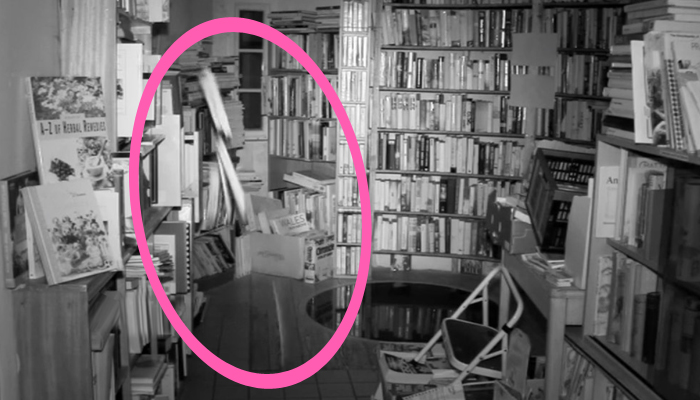 Towards the end of the episode, Yvette, Darren and Fred were back in the courtrooms. Although it wasn't noticed at the time, when looking back at the recording the team spotted what Yvette described as a "strange light anomaly." Although, it was probably just an insect flying by.
Also in the courtroom the team described hearing distant thudding sounds. Darren described if as being "like it's in here, but it feels like it's miles away." 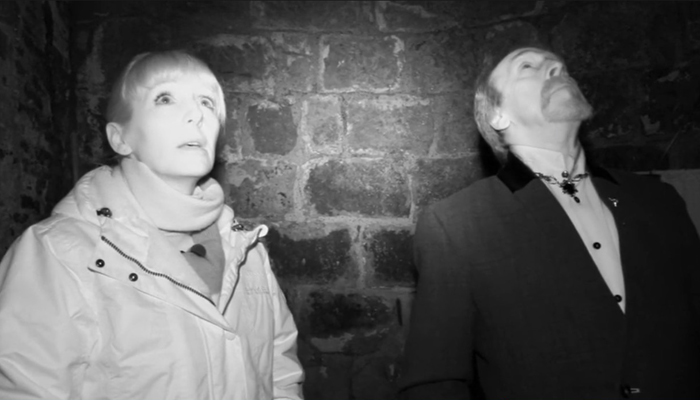 The three of them then moved to the other side of the castle, to a former guards' room. In this area the trio experienced what they described as rhythmic tapping, as well as more distant thuds and rumbling.
The episode ended with a séance and what Yvette described as a psychometry experiment, which basically involves making physical contact with a token-object, in this case the breast plate of the armour. Although the team claimed the piece of armour was trembling, little else happened in the séance and the episode came to a close.
For reviews of all of the new episodes, plus highlights and evidence from the shows, and to find out when Most Haunted is on next, visit the Most Haunted episode guide.