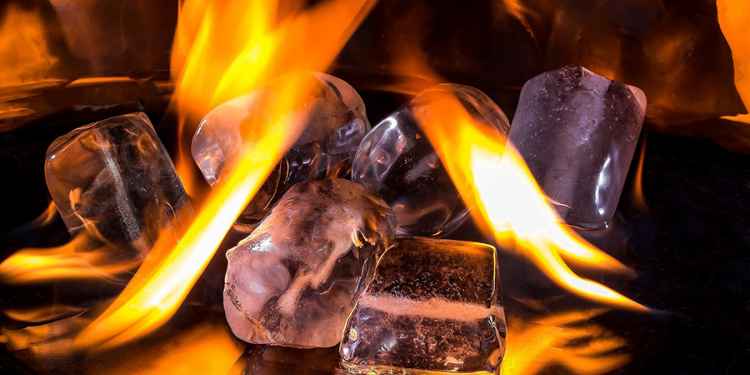 Photo: pixabay.com
You can't fail to have heard of the paranormal phenomenon of cold spots, a highly localised area of inexplicably low temperature that is said to occur as a result of a haunting.
These areas are noticeable as they are considerably colder than the air around them. In haunted locations a cold spot can sometimes be a part of the haunting and will always appear in the same part of the room. In other investigations the cold spot will move around with the paranormal activity witnessed.
The exact mechanism that causes cold spots is not understood by paranormal investigators, but one thing can be known for sure - a ghost isn't surrounded by a cold aura and it doesn't generate cold. This is because cold energy doesn't exist.
In physics, what we refer to as cold is actually a lack of thermal energy. Instead of heat, think of another type of energy, light - a lightbulb emits light, when you flick the switch and the light goes off, the room goes dark. This isn't because something starts emitting darkness into the room, it's because the source of light has stopped. Darkness is the lack of light.
The same applies with heat - if you boil a kettle you convert electrical energy into heat and the water gets hot. If you leave the kettle for long enough the energy in the water escapes into the air and the water becomes cold.
Hot and cold are just a label we use to describe high and low thermal energy. So basically, something is cold because of a lack of heat or thermal energy. When something feels cold to you, like the air around you, what you're actually feeling is your body heat rapidly leaving your body and warming up the air.
So if a ghost isn't inherently cold, and cold is the absence of heat, then the ghost must be taking the heat from the environment. The most generally agreed upon belief amongst paranormal investigators is based around the theory that ghosts are made of an unknown type of pure energy that can live on after death outside the human body.
This belief is a little contradictory, because if a ghost is made of pure energy, then if anything it should warm its environment up rather than cool it down.
The reason for the chill is thought to be down to a ghost's need for energy, in order for it to manifest, perform a task or otherwise show itself, the ghost needs to draw on energy sources around it. Investigators think this energy can come from the energy in our bodies, electrical wiring in a building, batteries in ghost hunting gadgets, and even the ambient heat in the air around us.
It's said that the reason that a cold spot forms is because the ghost has pulled the heat out of the air around it.
Of course, this isn't the only possible cause of a cold spot. During a paranormal investigation you should be sure to rule out the possibility of draughts from windows, under doors or through ventilation.
You may also find that only certain members of an investigation can feel the drop in temperature, or that a thermometer placed in the cold spot registers no change in temperature. This could indicate that certain people are more susceptible to this phenomenon and perhaps the energy is being pulled from their body rather than the air around them, or they are just more open to suggestion than other members of the investigation and the perceived drop in temperature is all in the mind.
If you want to get scientific and try to record evidence of a cold spot, then you'll need to have the right thermometer. The most commonly used type on ghost hunts is a point and click infrared digital thermometer, but these handheld gadgets aren't fit for purpose when it comes to detecting a cold spot. The device can't measure air temperature, so if someone feels cold and you point it at them you'll only be reading their body temperature, not the temperature of the air around them.
Thermometers designed for ghost hunts are often built into other ghost hunting multi-tools, such as the EDI+, Mel Meter and the second generation REM-Pod. These devices usually flash a red or blue light, or make an audible tone to indicate a sudden change in temperature.
A cheaper alternative, and an option that we think is also more accurate, is to buy yourself a cheap digital thermometer or a glass thermometer. These are tried and tested method of recording temperature changes.
Add A Comment
Tags:
paranormalscienceghosts