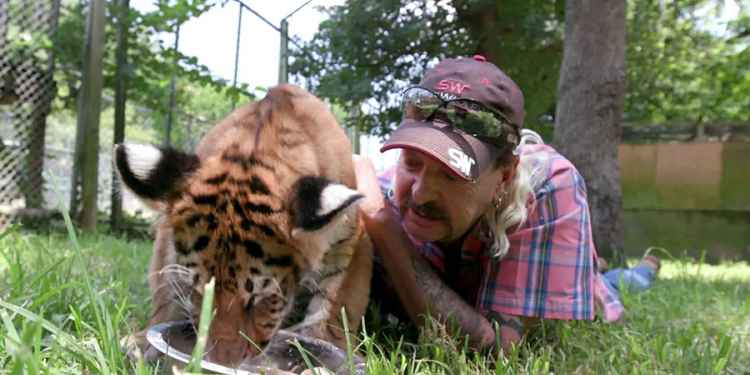 After filming an episode of 'Ghost Adventures' at the animal park made famous by Netflix's 'Tiger King', Zak Bagans plans to add a collection of its former owner's personal possessions to his haunted museum.
As the global pandemic had people around the world locked down at home, many turned to Netflix and binge watched the true crime series about rival zookeepers Joe Exotic and Carole Baskin, making both worldwide phenomenons.
The Netflix series touched on speculation of murder and even floated the idea that victims might have been fed to the exotic animals kept at the Greater Wynnewood Exotic Animal Park in Oklahoma, something its owner at the time Joe Exotic denies. The zoo is also the site of a suicide. The disturbing moment Joe's late husband, Travis Maldonado, shot himself featured in the documentary.
With so much grim history, misery and rumours of murder at the location, it seemed it was all too much for Zak to stay away from. He took his team made up of Aaron Goodwin, Jay Wasley and Billy Tolley to the Ohio attraction to film an episode of his long-running Travel Channel show, 'Ghost Adventures'.

I will never EVER forget the week I just had. 🐯👑

The zoo is now run by Jeff Lowe since Joe went to prison in 2019 for numerous counts of animal abuse and for trying to hire a hitman to kill his rival, Carole. While filming there, the GAC called in cadaver dogs to sniff out possible evidence that a murder victim might have been fed to the wild animals at the park. The initial findings did suggest the presence of human remains in the alligator enclosure, but this was later debunked.
Zak came away from the zoo with more than just ghost stories. Jeff provided the television ghost hunter with some of Joe's prized possessions, many of which were seen on 'Tiger King'. The haul includes the original "Exotic Animal Park" sign, a section of a wall mural that is said to be marked with a bullet hole from Travis's suicide, and a glass pipe that formerly belonged to Travis.
Zak also took possession of Joe's jewelled crown, a pill bottles, items of clothing, trinkets from his many weddings, and bizarrely his penis pump.
The intimate items will feature in a 'Tiger King' exhibit at Zak's own Haunted Museum, near Charleston Boulevard and 6th Street in Vegas. The museum is already said to be packed full of so many disturbing haunted items that guests are required to sign a waiver to enter and under 16 year olds are not allowed in.
The museum has thousands of supposedly haunted and demonically possessed items on display, including Peggy the Doll who is known to cause heart attacks. There's also the original wooden staircase from the Indiana home that featured in Zak's documentary, 'Demon House', a chair from the room where Michael Jackson died, and the infamous van that was fitted out as a mobile assisted suicide wagon by the controversial, Dr. Jack Kevorkian.
As for the zoo, in June a US judge ruled that the park must be handed over to Carole, and Jeff has been given 120 days to vacate the attraction and remove all the animals from the 16 acre site. Jeff has publicly said that the park is in a state of "complete hell" and promises to leave it in a mess for Carole.
Add A Comment
Tags:
televisionzak bagansghost adventuresparanormaltopicalnetflix