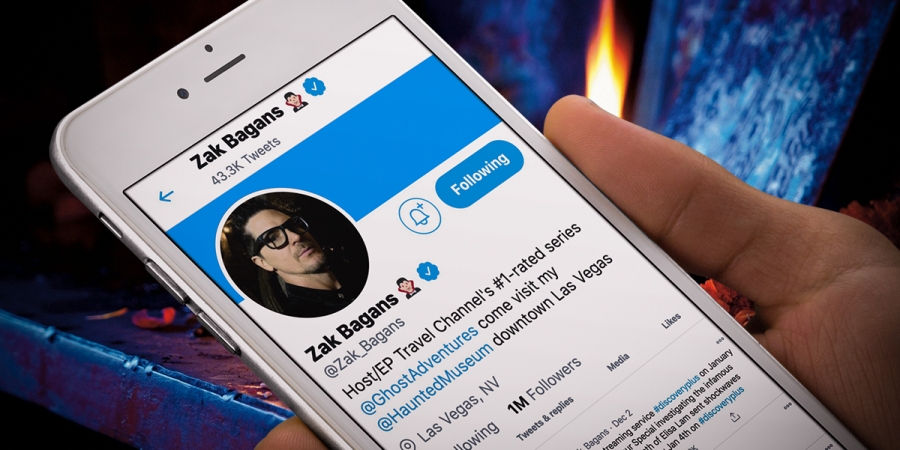 Zak Bagans has reached the dizzying heights of one million followers on Twitter, maintaining his lead as the most followed star from the paranormal world.
The 'Ghost Adventures' host joined the social media platform in August 2009 and has been growing a fanbase thanks to his regular tweets alongside the long-running television series ever since.
Unsurprisingly, Zak's final push over the impressive one million mark occurred around Halloween, around the week that the show's Halloween special aired. This year the show focussed on the team's investigation of the wild animal park formerly owned by Joe Exotic of 'Tiger King' fame.
Zak is the first paranormal star to pass the one million milestone on Twitter, achieving the accolade with more than double the followers of most investigators from his and other ghost hunting television shows. The next most followed from 'Ghost Adventures' is Aaron Goodwin who's racked up 647.9K followers.
But Zak's closest competition is Adam Ellis AKA @moby_dickhead, the host of paranormal show 'Trending Fear' who has an impressive 922.9K followers. However most of Adam's following is a result of a string of terrifying viral tweets he shared in 2017 telling the story of the sinister ghost of a child which Adam claims was haunting his apartment at the time.
Zak's former co-star, Nick Groff, who's best known as the host of 'Paranormal Lockdown' came in fourth with just over half a million followers. Closely followed by Zak's 'Ghost Adventures' co-stars Billy Tolley in sixth place with 340.3K followers and Jay Wasley at no. 9 with 274.1K.
Jack Osbourne, host of 'Portals To Hell' also has an impressive following of 442.7K on Twitter. This year Jack has appeared alongside his legendary parents in 'The Osbournes Want To Believe'. It's fair to say that Ozzy and Sharon Osbourne's Twitter following eclipses not only Jack's follower count, but also Zak and pretty much the rest of the paranormal world put together.
Ozzy has a staggering five million followers, while Sharon comes in at over two million followers. Although the pair feature in Jack's shows, their Twitter success obviously doesn't directly come from their involvement in the paranormal world. Ozzy is a megastar in his own right as a former singer in Black Sabbath, and Sharon as the host the US show 'The Talk'.
You can see the full list of the top twenty most followed paranormal stars below. The numbers are correct as of the date of publication of this article, December 2020.