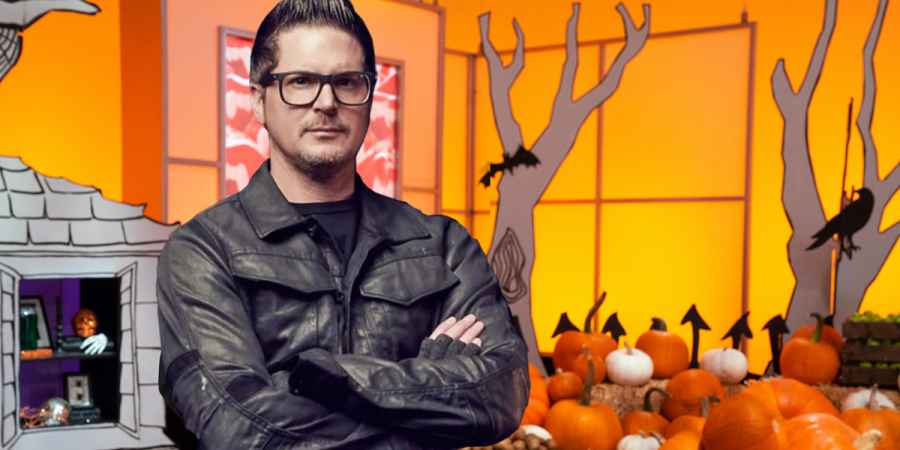 Zak Bagans' paranormal experiences and his collection of haunted artefacts are set to inspire the creepy creations this October in the Food Network and Discovery+'s Halloween lineup.
The last place you'd expect to find the television ghost hunter this Halloween is in a kitchen, but like a focused non-terminal repeating phantasm, Zak will be appearing as a recurring guest on the Food Network and Discovery+ this October.
The US network, which connects viewers to the power and joy of food, are going all out this year to help their audience get into the spirit of the dark season. It promises viewers "edge-of-your-seat competitions and mind-blowing edible creations".
But you might be wondering how the 'Ghost Adventures' star fits into all of this. Well, he'll be downing his ghost hunting gadgets and lending inspiration to the Halloween-themed challenges in a new season of 'Halloween Wars', hosted by comedian John Henson.
Zak, who's become a staple part of the Halloween television schedule over the fifteen years, has experienced some of the scariest supernatural encounters ever recorded, and for the first time he shares those experiences with the eight 'Halloween Wars' teams of expert cake and sugar artists in the new season, premiering Sunday, September 19 on Food Network and Discovery+.
Over the course of the season, Zak takes inspiration from his collection of dangerous and mysterious artefacts from his Haunted Museum in Las Vegas to challenge the teams to create frighteningly intricate cakes that are as spooky as they are tasty. One team will be eliminated in each episode by a panel of judges featuring award-winning cake decorator Shinmin Li, and chefs and cookbook authors Aarti Sequeira and Eddie Jackson, and the last team standing will earn $25,000.
Before the 'Halloween Wars' thrills kick off, see how the competitors were selected in a special 'Road To Halloween Wars' on Sunday, September 19 on Food Network as 15 brave cake and sugar artists show off their skills to prove why they deserve to compete for the grand prize.
The network's Halloween treats also include 'Halloween Baking Championship' and 'Outrageous Pumpkins' with host actress Alyson Hannigan. Plus new specials 'Road To Halloween Wars', 'Kids Baking Championship: Oh My Gourd!' and 'Worst Cooks in America: Halloween Redemption 2'.
Food Network and Discovery+ are aiming to be the go-to destinations for out of this world Halloween-themed programming this year. Although Food Network is only available in America, British fans of all things spooky will be waiting to hear if the specials featuring Zak will stream this side of the pond on Discovery+ this Halloween.
"Viewers love our Halloween lineup, an over-the-top, multi-week event full of frights, delights, thrilling competitions and spectacularly spooky edible themed creations," said Courtney White, President, Food Network. "Each year we look to outdo ourselves and with Zak Bagans bringing inspiration to the scariest season of 'Halloween Wars' yet, along with returning favorites 'Halloween Baking Championship' and 'Outrageous Pumpkins', Food Network delivers all the Halloween tricks and treats and more."
'Halloween Baking Championship' will pay homage to some classic 80s horror as a new batch of ten talented bakers from across the United States compete to create terrifyingly tasty treats, premiering Monday, September 13. The season pays tribute to 1980s classic slasher movies, kicking off with host John Henson welcoming the competitors to Camp Devil's Food Lake where only their baking skills will help them survive.
Each week the bakers must create killer cakes, creepy cupcakes, and more, to showcase their skills in challenges that pay homage to quintessential horror films. Judges Stephanie Boswell, Carla Hall and Zac Young determine whose devilishly delicious desserts earn $25,000 and the title of Halloween baking champion.
It's thrills, chills, and grills on a special episode of 'Worst Cooks In America: Halloween Redemption'. Four ghoulishly disastrous worst cooks recruits return for another stab at boot camp on Sunday, September 26 on Food Network and they will once again face their fears in the kitchen and tackle terrifying ingredients.
Under chefs Anne Burrell's and Michael Symon's coaching, the culinary hopefuls will create a spooktacular feast for a panel of culinary experts. The recruits start by making a dish using a mystery ingredient they have been assigned; after Anne and Michael pick their teams, the chefs will teach them to make a buffet for a Halloween gathering in order to win a kitchen upgrade worth $5,000 and bragging rights.
'Outrageous Pumpkins' with host Alyson Hannigan returns on Sunday, October 3 to Food Network with four episodes that take the traditional Halloween pastime to the next level. Seven extraordinarily talented pumpkin carvers duke it out in an outdoor pumpkin competition that defies imagination. Each week the carvers dive headfirst into the most-insane, eerie, and outrageous challenges, executing their intricate Halloween designs to impress judges Terri Hardin and Marc Evan. Only one will earn the coveted title of Outrageous Pumpkin Champion and take home a sweet $25,000 Halloween treat.
Four fan-favourite kid bakers return for a Halloween-themed confection competition on a special episode of 'Kids Baking Championship: Oh My Gourd!' On Monday, October on Food Network the young bakers must face the creepy pumpkin patch for this challenge and create 3D pumpkin patch pinata cakes. Only one baker will rise to the occasion and say "oh my gourd" when they take home a baker’s dream package of baking goods and equipment worth $10,000.
For more seasonal fun, viewers can also look forward to Halloween-themed episodes of 'The Big Bake', as well as special themed episodes of 'Delicious Miss Brown', 'Guy's Ranch Kitchen', 'Girl Meets Farm', 'The Kitchen', 'The Pioneer Woman and Trisha's Southern Kitchen' in Food Network's weekend daytime lineup.
Tags:
halloweenhalloween 2021discoveryplusparanormaltelevisiontopical