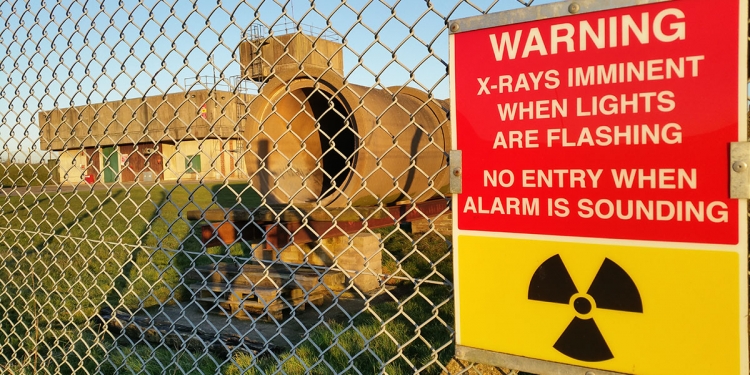 Nicknamed the "737 Bunker" due to there being half a Boeing 737 next to it, it is located on the Salisbury Plain and used for weapons testing.

This is an active site which is operated by a Ministry Of Defence sub-contractor.

The site is operated by Cranfield Ordnance Test & Evaluation Centre (COTEC), a weapons testing company. It comprises of a bunker-like building with a lookout tower. The bulk of the facility appears to be above ground, in fact there's no evidence that there is anything underground.
There are signs around the perimeter warning of exposure to x-rays when sirens sound. With this in mind and when the red danger flags aren't flying on Salisbury Plain it might be safe for you to walk over to it and have a look.
According to COTEC's website, the facility is called "rear battery" and along with the "front batteries" located near by, they describe the sites as, "two secure, blast-proof battery buildings support all operations at COTEC. They host munition storage and preparation areas, together with temperature conditioning facilities. The buildings also house the trials control rooms, instrumentation facilities, visitor accommodation and operations control towers."
"The Rear Battery is used for explosive and non-explosive trials that can be contained within its perimeter fence. The Forward Battery can also conduct short range trials within its security area, but importantly acts as the control and firing area for the majority, more energetic COTEC trials, and for firing into Area 15 and 16 Impact Areas."
Tags:
undergroundwiltshireurbex