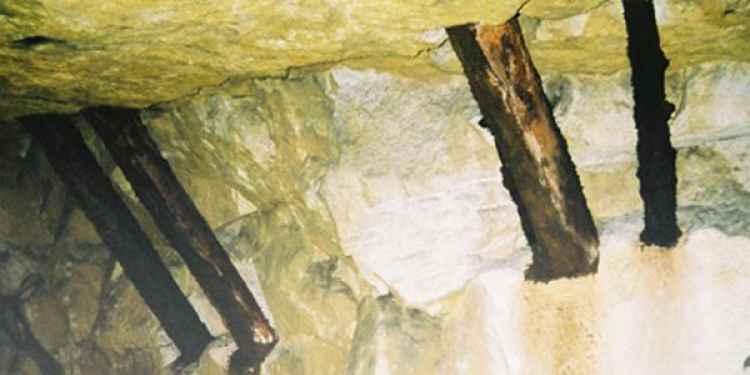 Hollybush is a small, single entrance quarry situated south of Wadswick Lane nearer Neston than Wadswick, the reason the quarry is so small is because it was found that the stone quality was poor.

This quarry is accessible however the slope shaft is very slippery so it's advised to use rope to help you exit the quarry safely.

Hollybush Mine consists of one slope shaft, an air shaft and about two hundred yards of passage. The air shaft was similar to Westwells as it would have once been a trial shaft, sunk to test the quality of the stone. It seems that the shaft was sunk in an area where the stone was good so a slope shaft was built. Rails were installed to move the stone and a lot of preparation went into the mine.
It was later found out, the stone was poor and fractured. This meant that it was impossible to cut a large block so it was impossible to economical1y compete with other stone companies. This explains why the mine is so small. Hollybush was closed on December 11th 1902 and rubbish tipped down the slope shaft to cover up the embarrassment. The vertical shaft has been capped leaving no trace on the surface.
Tags:
undergroundwiltshireurbex