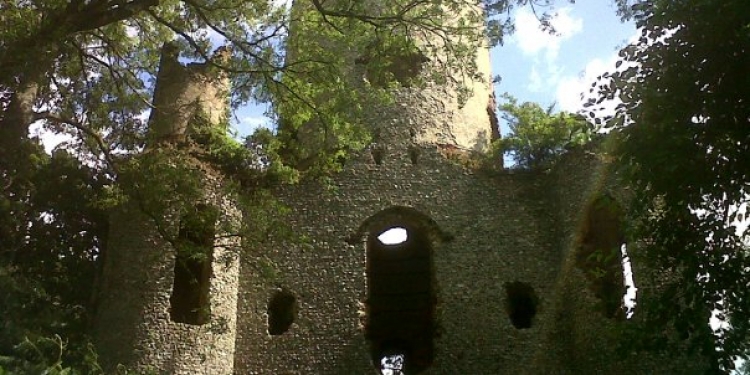 Racton Monument, or the Racton Ruin as it's known locally is a hilltop folly on the edge of Standtead Park in West Sussex. It has been abandoned and derelict for many years despite their being a planning proposal to develop the folly and turn it in to a residential dwelling.

There's access from a public footpath which runs alongside the folly.

Constructed between 1766 and 1775, the Racton Monument was originally the summerhouse of the 2nd Earl of Halifax, although this could have been a cover and the real purpose of the tower was for him to watch his merchant ships dock at the nearby port village of Emsworth.
The folly has bee abandoned for over one hundred years and has fallen into disrepair. The folly is in the hands of a private owner who has obtained permission to redevelop the monument and covert it in to a residential dwelling.
As well as being a popular location for illegal drug use due to it isolated location, during it's uncared years the folly has also become the site of multiple suicides and many occult rituals have been performed here.
As a result of the monument's grisly history the folly is now popular with paranormal investigators who research the many reports of hauntings, including claims that people have seen bricks thrown from above and heard disembodied shouts.

Folly at edge of Stanstead Park, western West Sussex. Unique footage flying up in the inside of the ruin.