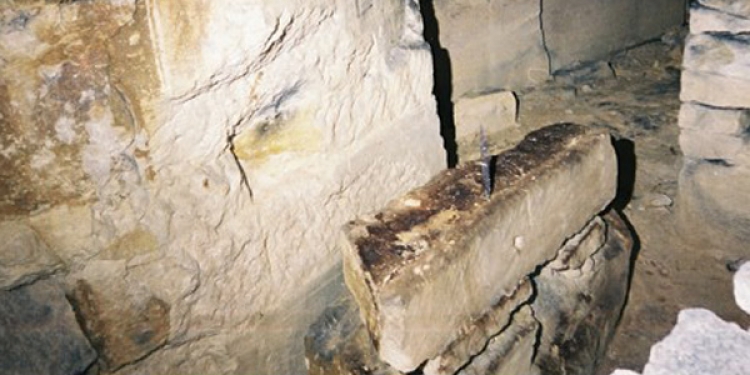 Originally quarried for Bath stone up until 1914, it was later put in to use by the War Department as a sub-depot of the Central Ammunitions Depot Corsham.

The entrance to the slope shaft has now been sealed off and is inaccessible.

Originally an average size Bath stone quarry with links Monks Park Quarry, there is a geological fault running through the quarry meaning the limestone varies in depth by about 20 feet, as the quarry men have followed the stone it as resulted in one half of the quarry being 20 foot lower the other. The is an internal slope shaft taking you from the top to lower level.
Ridge was quarried up until 1914 when at the start of the First World War, Ridge was requisitioned by the War Department. They cleared out the waste stone and stacked it up in older parts of the workings and strengthened the roof so that ammunition could be stored in the mine.
During the build up to WW2 the War Department decided that there was a need for a large underground ammunitions store. It was decided that the required space could be obtained by converting four quarries, these four formed what was collectively known as the Central Ammunitions Depot Corsham. Ridge Quarry was acquired and put to use as one of these sub-depots. The three other sub-depots were Tunnel Quarry at Corsham, Eastlays Quarry at Gastard and Monkton Farleigh Mine.
Ridge Quarry was never converted to the same extent as the rest of the Central Ammunitions Depot Corsham so it became surplus soon after the war had finished. There is however evidence of Monkton-style corseting and strengthening work in the quarry but at an incomplete stage as the budget was never approved. 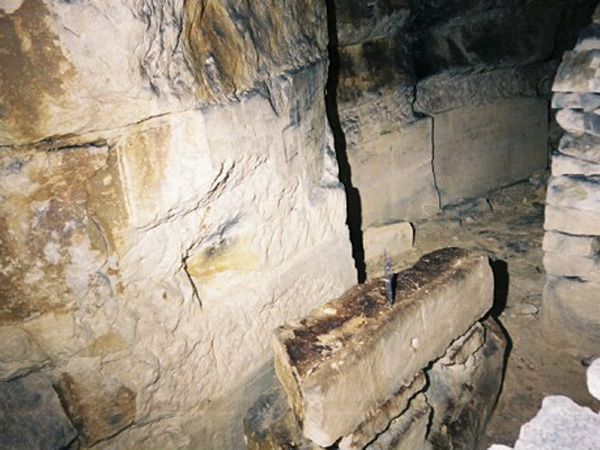 Ridge Quarry makes up part of the Central Ammunition Depot Corsham, an amazing labyrinth of air-conditioned tunnels and chambers....
One hundred feet below ground, and extending under some 200 acres of north Wiltshire countryside in four separate sub-depots, which between them housed over 350,000 tons of ammunition. The depot was served by arterial networks of railways and conveyors, and had it's own system of underground powerhouses to provide electricity for the 100,000 lamps that lit it's streets.
The four component sub-depots were Monkton Farleigh Quarry, Tunnel Quarry at Corsham, Eastlays Quarry at Gastard, and of course, nearby Ridge Quarry.
Ridge Quarry is average in size but has changed considerably since quarrying finished in 1914. When the First World War started it was requisitioned by the War Department. Electric lighting and tramways were installed as well as racking for many tons of munitions.
In 1936 work started to adapt Ridge Quarry for the Second World War, 96,000 tons of stone was removed to make room for storage. The existing racking was taken out, the floor was leveled and the tramway was extended.
To the west of Ridge Quarry lies another mine called Old Ridge. This is approximately the same size as Ridge and once there was no obvious barrier between the two. When the War Department cleared out Ridge they moved the loose debris into Old Ridge, they then separated one from the other with a wall. A tramway was used to move the waste stone through Old Ridge and a horseshoe shaped passage was formed around the perimeter of the workings.
A second slope shaft was opened in to Ridge Quarry to make access to it's lower level easier resulting in the need to strengthen a large section of roof.
An old ventilation shaft was fitted with a winch and converted in the a lift shaft, this could handle a third as much as the struggling slope shafts which at this time were manned by two shifts of men to increase the amount of munitions being taken in and out of the mine.
The mine is crossed by a major slip-fault, with the result the one half of the working is about 20 foot lower than the other. Two slopping haulage ways were driven to connect the upper and the lower levels. Steam winches were installed to pull the carts of the underground tramway up the inclines.
Work was started in 1938 to reinforce the existing stone pillars with concrete to form rectangular supports and more regular storage bays and straight interconnecting haulage ways between them. Fifteen pillars were started as well as a length of perimeter wall in the South East. A few months later all work was stopped permanently due to costs running in to excess of expectations.
No further work was ever completed or planned at Ridge Quarry and the pillars can still be seen in varying degrees of completion today. Surface buildings were kept to a minimum at the Ridge Quarry site so very little still remains.
Ridge Quarry was re-purchased by Neston Estate which exercised it’s right of pre-emption. Surface buildings were demolished except for No.2 shaft and transit shed which had found a new agricultural use. Debris from the surface buildings demolition was bulldozed in to the lift shaft and No. 1 slope shaft completely blocking them. No. 2 slope shaft is still accessible although little evidence remains today of the true extent of the storage area below.