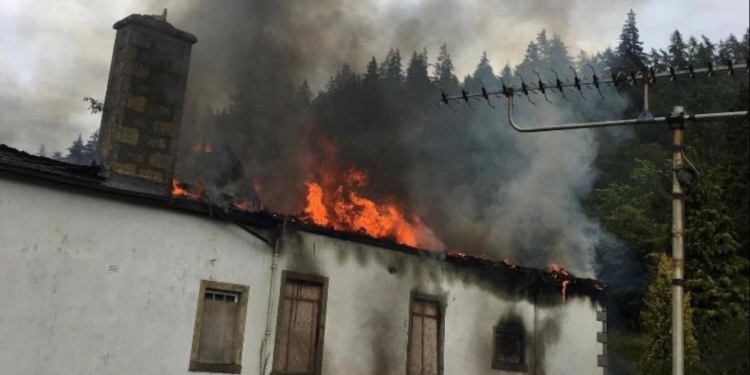 Photo: gofundme.com
A fire has ripped through the ruins of a historic house on the south-east side of Loch Ness, which was once the home of author and occultist Aleister Crowley where he performed black magic rituals.
This is the second time a fire has broken out at Boleskine House. The property near Foyers in the Scottish Highlands was partially destroyed by a major fire in 2015 and is now in ruins.
The Scottish Fire and Rescue Service attended the scene of the blaze with two fire engines at around 4pm on Wednesday 31st, July - the night of a "black moon".
Some have speculated that the fire may have been started accidentally by candles being used in amateur Crowley-esque rituals at the property. However, this was soon ruled out when fire fighters arrived to find two separate fires at the location - both the main house and the neighbouring coach house were engulfed in flames.
The Friends of Boleskine House later posted on Facebook that the fires were started deliberately and that the coach house had been saved but what was left of the roof of Boleskine House had collapsed.
In a Facebook post the foundation said, "we have received a report and have verified that the remainder of Boleskine House is on fire, as a criminal act of vandalism. Two fire engines are on site. If anyone is local and capable of going to see what is going on we would be grateful.”
Although it was seriously damaged by the 2015 fire and has been victim to a lot of vandalism ever since, the house along with over 22 acres of surrounding land were sold earlier this year to three anonymous buyers who are hoping to restore the property to its former glory.
The Boleskine House Foundation's aim is to turn the house into a charitable foundation and open the estate up to the public with the intention to further engage culture, history, heritage and education through the enjoyment of its surrounding gardens and guided tours of the house, along with hosted events that promote the estate's history and legacy.
This foundation is currently asking for the public's help to raise funds via a Go Fund Me campaign. You can find out more about the project and how to support it at boleskinehouse.org.
Boleskine House was once owned by musician Jimmy Page, of Led Zeppelin, but before that was the home of Crowley. He bought the house from the Fraser family in 1899 and performed dark rituals at the property up until 1913. The remote house was the ideal location for Crowley's rituals, as he believed that "the first essential is a house in a more or less secluded situation."
It was here that he performed a series of rituals known as the Sacred Magic of Abramelin the Mage, the purpose of the ritual was to invoke a Guardian Angel. The process takes over six months to complete, but part way through Crowley was called away to Paris.
It's said that because of his hasty departure, he never banished the demons he had summoned as part of the ritual, leading many to believe that Boleskine House is haunted and cursed. Could this latest out break of fire be a result of the dark curse hanging over the property?
The news comes less than 24 hours after vandals targeted a historic haunted property in Warwick. A stone wall at Guy's Cliffe House was dismantled during the incident and signs were ripped off the building causing damage to its outer wall.
Tags:
black magictopicalscotland