Could A Government Experiment Hint At A Missing Link Between Physics & The Paranormal?

The results of the US government's Muon g-2 experiment suggests something currently unknown to us is influencing our reality, could this unknown be an exotic type of energy that gives rise to paranormal phenomenon? 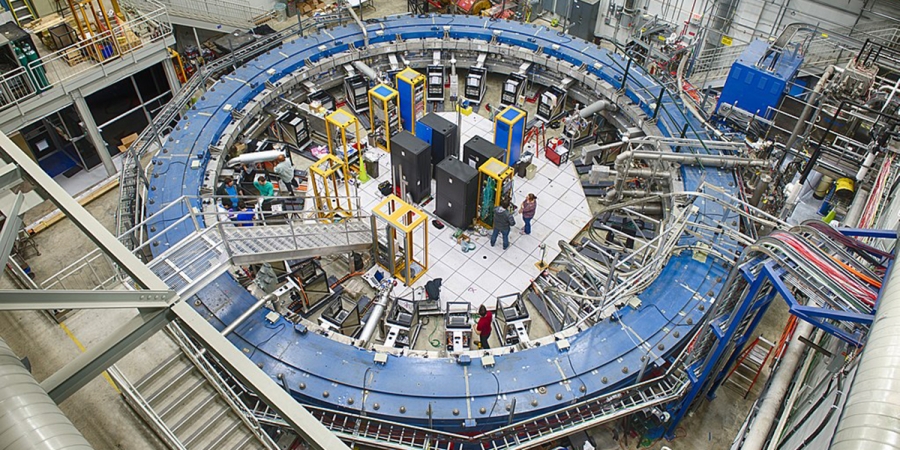 Photo: © Glukicov
Last month Fermilab announced the results of an experiment that suggests that our current understanding of how the universe works might not be the whole picture.
Whenever the idea of something existing beyond our current level of understanding is bounced around, people in the paranormal field get excited - after all that is the definition of the paranormal, something outside, above and beyond the norm.
The reason why the results announced on April 7 seemed hopeful to some paranormal researchers is because by its very nature the paranormal falls outside of the normal realms of science, so when it's suggested that there's more to science than we currently understand then it's not too much of a leap to conclude that this missing chunk of physics must be the bit that applies to ghosts and the afterlife.
With tantalising headlines like 'Government Physics Experiment Suggests Something Unknown Is Influencing Reality' being posted on ghost hunting groups on social media, it's easy to see why many paranormal researchers got excited, but is there any reason to think that the Muon g-2 Experiment might be related to the supernatural?
In this case the reason for the paranormal interest in this physics story is mostly fuelled by the headline above, which was used by Vice. It mentioned the "unknown" and how it could be influencing not just the universe but reality. Compare this to the headline used by Universe Today, 'Fermilab’s Muon g-2 Experiment Finally Gives Particle Physicists a Hint of What Lies Beyond the Standard Model', and straight away the science story sounds less metaphysical.
So, what exactly did this experiment conducted at the US Department of Energy’s Fermi National Accelerator Laboratory (Fermilab) prove? Well, put simply it looked at some tiny subatomic particles called muons, which are similar to the more familiar electron but have a much larger mass. It found these particles didn't behave as expected based on our current understanding of the universe.
Thanks to the Standard Model of particle physics, we know how muons should behave. The Standard Model describes how the fundamental forces in the universe work. It's allowed us to understand everything from how subatomic particles are held within an atom, through to predicting the existence of black holes decades before we found one.
When muons are exposed to a magnetic field, their own internal magnet fluctuates. This fluctuation was predicted by the Standard Model, but 20 years ago scientists found that the muon's magnetism fluctuated more than it should have according to the Standard Model.
This glitch in the model was first observed two decades ago at the Brookhaven National Laboratory (BNL), but the latest experiment's aim was to determine if muons really were behaving in an unexpected manner, or if the original BNL experiment was flawed in some way.
The experiment confirmed the anomaly detected by BNL, which strongly suggests that something currently unknown to us is influencing the magnetic field of muons in ways that are not accounted for by the Standard Model.
While the scientific amongst us would conclude that this hints at a new and unexplained exotic branch of physics - perhaps in the form of an undiscovered particle or forces, those with a more spiritual bent see this unexpected behaviour as possible proof of a God or spiritual energy of some kind.
Although some ghost hunters put their faith in unproven ghost hunting gadgets, there's currently no scientific way to measure paranormal phenomenon. Ghost hunters often talk about 'energy' that causes an apparition to form or allows a poltergeist to be mischievous, but according to our current understanding of the universe, this energy doesn't exist.
Physicist Brian Cox famously explained why he thinks ghosts don't exist. He said, "if there's some kind of substance that's driving our bodies, making my arms move and legs move, then it must interact with the particles out of which our bodies are made. And seeing as we've made high precision measurements of the ways that particles interact, then my assertion is there can be no such thing as an energy source that's driving our bodies."
But, he did say "if we want some sort of pattern that carries information about our living cells to persist then we must specify precisely what medium carries that pattern and how it interacts with the matter particles out of which our bodies are made. We must, in other words, invent an extension to the Standard Model of particle physics that has escaped detection."
Since the results of the Muon g-2 Experiment are at their core proposing just that, an extension to the Standard Model, could the experiment be hinting at the existence of some kind of unknown force or energy within our bodies that controls our limbs and gives us our 'life force'?
Well, since the unexpected influence the experiment hints at is unknown to us, there's no way to know exactly what it does, or how it influences the world around us and even our universe and reality.
Although very unlikely, it could be that this new exotic physics we're on the verge of uncovering is the missing link that will allow us to understand how our organic brains can give rise to consciousness.
This could in turn lead us to a new understanding of life after death - but this is certainly not what Graziano Venanzoni, co-spokesperson of the Muon g-2 experiment, was hinting at when he announced the results and said, "today is an extraordinary day, long awaited not only by us but by the whole international physics community."
Add A Comment
Tags:
scienceparanormalghoststopical