Is It Morally Wrong For Paranormal Investigators To Communicate With The Recently Deceased? 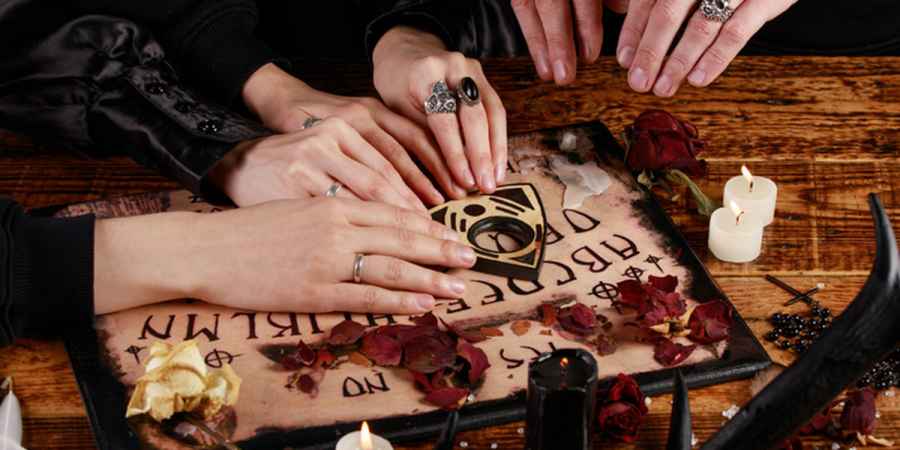 Photo: © Can Stock Photo / danilsneg
The paranormal community is up in arms once again, this time after a video surfaced showing a paranormal investigator attempting to "interview" a very recently deceased public figure.
Many branded the investigator "opportunistic" and "sick" for his countless videos uploaded to his YouTube channel in which he attempts to make contact with celebrities on the day of their death using a spirit box. We're not going to name the investigator because he doesn't deserve the attention, and we're not going to name the person he tried to contact out of respect for the family.
The investigator in question has already been labelled a "charlatan" in several angry Trust Pilot reviews. He carries out his interviews with the stars of the spirit world using a ghost hunting gadget called a spirit box. This device rapidly scans through FM and AM radio frequencies. The theory is that spirits can manipulate whatever fleeting bursts of radio broadcast, static and white noise it needs to form words and sentences to facilitate realtime communication.
This and other methods of speaking to the dead are pretty common amongst ghost hunters, but the reason that this latest spirit box session has caused such a storm is because the person the investigator was trying to make contact with was a much-loved public figure who only passed away on the very same day that this sick experiment was being conducted.
Since a lot of the anger about this incident comes from the rawness of the death rather than the practice of speaking to the dead itself, it raises questions about when it is morally acceptable to contact a deceased person. Would this have been acceptable next week? Next month? Next year?
All ghost hunters attempt to make contact with the dead, but the line of taste and decency is drawn depending on that spirit's legacy. When they are survived by living family members the practice of contacting them is usually deemed to be in poor taste.
For example, the infamous 30 East Drive in Pontefract, where the spirit of a black monk is said to have tormented residents and visitors to the house. The monk was sentenced to death for the murder of a local girl during the reign of Henry VIII. He's been long forgotten, as has his victim making hunting for their spirits guilt-free and ethical.
Even still, the paranormal community have been particularly upset by this latest incident even though in reality the only difference between this paranormal experiment and any other involving a spirit with living relatives is that as a nation we all like the target of the experiment a lot right now. When the same paranormal investigator tried to contact serial killer Peter Sutcliffe on the day of his death last year, there was no such outcry from the paranormal world.

The investigator in question is relatively unheard of, but there are plenty of examples of well known paranormal investigators and psychic mediums who have crossed the line and focused their investigations on the recently dead.
In 2003, psychic mediums Craig and Jane Hamilton-Parker attempted to contact the spirit of the late Princess Diana, this was six years after her death but of course she has living relatives. One critic at the time described the televised séance as an "exploitation at its very worst."
Just five months after the death of Michael Jackson, television medium Derek Acorah claimed he spoke to the singer in a similar live séance. He also once claimed to have received a message from Madeleine McCann through his spirit guide, Sam.
A paranormal events company landed themselves in hot water after using serial killer Fred West's name in promotional material for their 2018 Halloween event at the Steelhouse Lane lock-up in Birmingham. West Midlands Police said using the serial killer to publicise the event at the former police station was "insensitive", forcing the paranormal company to delete the association with the convicted killer.
The following year, Lee and Linzi Steer of Project reveal - Ghosts of Britain also kicked up a storm of controversy when they embarked on an investigation involving what they claimed was the cursed ashes of the child killer, Myra Hindley. The reason this stunt was so controversial was because one of the victims of Hindley and her accomplice Ian Brady's body has never been found, and to make matters worse, there are still living relatives of their five victims.
More recently seasoned paranormal investigator, Zak Bagans, came under fire for his four-part series, 'Ghost Adventures: Serial Killer Spirits'. Some within the paranormal community were understandably a little taken-aback by the show's premise of investigating locations linked to some of America's most notorious serial killers, many of which committed their crimes within the last few decades and in living memory of surviving family members.
Earlier this year, Zak once again investigated an equally as raw paranormal case for a 'Ghost Adventures' special at the sinister Cecil Hotel in downtown Los Angeles. During the two-hour-long episode Zak and his team attempted to make contact with the spirit of Elisa Lam, a young tourist who died in the hotel in mysterious circumstances. Her death only occurred in 2013 and her family are still trying to seek answers of the non-paranormal kind.
Of course these higher profile examples get negative press attention as well as the same level of condemnation from the paranormal community as the recently slated spirit box case, in fact even more so as they are exposed to a greater audience that extends beyond the paranormal community thanks to national press.
Depending on what survey you read, around 50% of the British population don't believe in ghosts and therefore don't believe it's possible to contact the dead at all. That means half of people wouldn't agree that attempting to contact someone's ghost is a valid paranormal experiment. They're likely to conclude that such an experiment is either faked, misguided or nothing more than a waste of time. They might also come to the conclusion that it's insensitive to try to contact the spirits of the dead when they believe that you quite simply cannot and the methods are flawed.
Opportunistic psychic medium are also often criticised for preying on the vulnerable by contacting the recently deceased loved-ones of grieving relatives for financial gain. A practice common in one-on-one personal readings as well as psychic stage shows, which in the UK must be promoted with the inclusion of a disclaimer along the lines of "mediumship is not scientifically proven and is presented for educational and entertainment purposes only."
This is a stipulation imposed by the 2008 Consumer Protection Regulations, which replaced the 1951 Fraudulent Mediums Act. These rules are in place to prohibit psychic mediums from intentionally conning those who seek out their services in England and Wales. A recent bereavement can make people vulnerable and may result in them seeking out the help of a medium who may not have their best interests at heart.
Of course some families will want and ask for this communication with the recently departed and for some the words of comfort from a medium can be helpful in the grieving process.
However, no matter what you think or where the line is drawn, you'd have to be pretty heartless not to agree that this latest example of a spirit box interview with a very recently deceased public figure is in very poor taste and nothing more than opportunistic and exploitative.
Add A Comment
Tags:
paranormaltopical

You could catch a lucky break that would help you sort out a home renovation problem. You might find supplies on sale, come across a good recommendation for a contractor, or be given a good do it yourself idea to... Read More