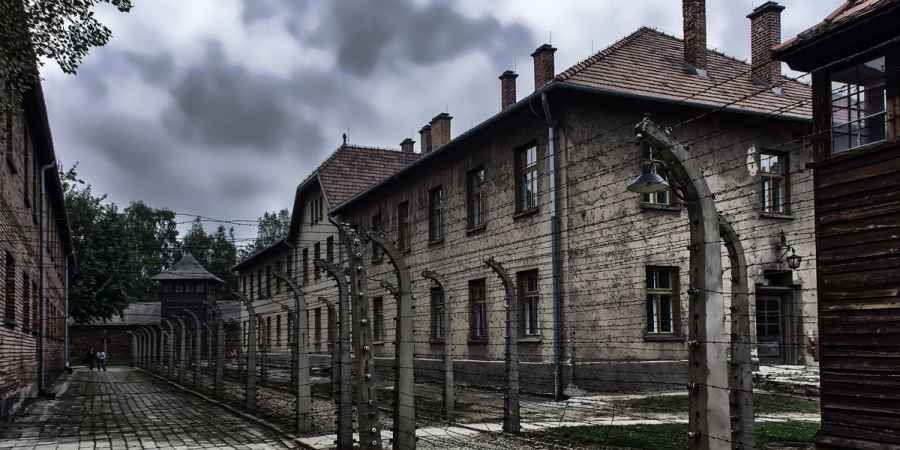 Photo: pixabay.com
Ghost hunting in locations like castles, stately homes and prison has become a leisure activity for the thousands of members of the public who attend paranormal events each week, but what about hunting down spirits in a graveyard, an ancient burial ground or even a concentration camp?
Auschwitz is probably the most infamous of all concentration and extermination camps, it was situated in Nazi-occupied Poland during World War II. In 1979 it was named a World Heritage Site by UNESCO and opened as a museum, a somber place to remember the martyrdom of the 1.1 million men, women and children who lost their lives during the Holocaust.
Since it's not uncommon for ghost hunters to ply their trade in museums and historic locations, even those with a grim past, does that mean it's morally acceptable to hunt for ghosts at Auschwitz?
Depending on what survey you read, around 50% of the British population don't believe in ghosts and therefore they don't believe in the practice of ghost hunting at all. That means that at least half of people are likely to conclude that a paranormal investigation is either faked, misguided or nothing more than a waste of time. It would therefore be very hard to justify to these non-believers why an investigator should be allowed to conduct these flawed or deceitful experiments in a place of remembrance or someone's final resting place.
It's very obvious that Auschwitz should be treated with respect, a ghost hunt is no more appropriate there than a barbecue. We're pretty sure that there is no debate here and that the wider paranormal community will agree with our stance on this, but just where do you draw the line?
Hunting for ghosts of the long-dead is something every ghost hunter does, but every now and again an investigator will wander into more sensitive territory and attempt to contact the spirit of a recently-departed celebrity, or those who've died in a news-worthy tragedy, even a massacre or genocide.
The truth is, most investigators will investigate these sort of places to some extent, it's just about where you draw the line. It's pretty common to hear about ghost hunts held in locations where there's a plague pit, where a body was bricked up in a wall, or on the site of a mass grave of the soldiers of an ancient battle.
Prisons like HMP Gloucester, Shepton Mallet and Shrewsbury, which are popular venues for ghost hunts, have seen the judicial executions of many criminals over their years of operation, and since it was stipulated that these guilty men and women couldn't be buried in consecrated ground, they were buried within the prison walls.
But criminals are different to those who have fallen due to natural causes, disease, murder or genocide, right? Well, perhaps in 18th and early-19th century Britain when these executions were common place they were seen differently, but by modern standards many of those who paid the ultimate price for their bad deeds had actually only committed offences that we would deem small and petty today - misdemeanours such as stealing a handkerchief or cutting down a tree.
Ghost stories are built on grim tales like that of the infamous 30 East Drive in Pontefract, where the spirit of a black monk is said to have tormented residents and visitors to the house. The monk is said to have been sentenced to death for the rape and murder of a local girl during the reign of Henry VIII.
So, ethically and morally, where do we draw the line? Why is it acceptable to hunt for the petty criminals who fell victim to a harsh judicial system, the ghost of a girl murdered by a monk, or the ghost of plague victims?
Where we draw the line of taste and decency depends on a supposed spirit's legacy. When the ghosts of a location are survived by identifiable living family members the practice of contacting them is usually deemed to be in poor taste, this will be true of somewhere like Auschwitz, which was operational until 1945.
Our ethical take on an investigation also takes into account the robustness of the ghost stories. Many hauntings are based on unsubstantiated claims, like the story of Elizabeth who is believed to have been murdered and buried beneath the bar at the Ancient Ram Inn - there's no documented evidence that this ever occurred, however the horrific events of the Holocaust are very well documented and very real.
Despite it seeming obvious where the line lies, there are plenty of examples of paranormal investigators crossing that line in to territory that is far too real and recent to be exploited in this way.
In 2003, psychic mediums Craig and Jane Hamilton-Parker attempted to contact the spirit of the late Princess Diana, this was six years after her death but of course she has living relatives. One critic at the time described the televised séance as an "exploitation at its very worst."
Just five months after the death of Michael Jackson, television medium Derek Acorah claimed he spoke to the singer in a similar live séance. He also once claimed to have received a message from Madeleine McCann through his spirit guide, Sam.
A paranormal events company landed themselves in hot water after using serial killer Fred West's name in promotional material for their 2018 Halloween event at the Steelhouse Lane lock-up in Birmingham. West Midlands Police said using the serial killer to publicise the event at the former police station was "insensitive", forcing the paranormal company to delete the association with the convicted killer.
Tags:
paramormaltopicalghost hunting