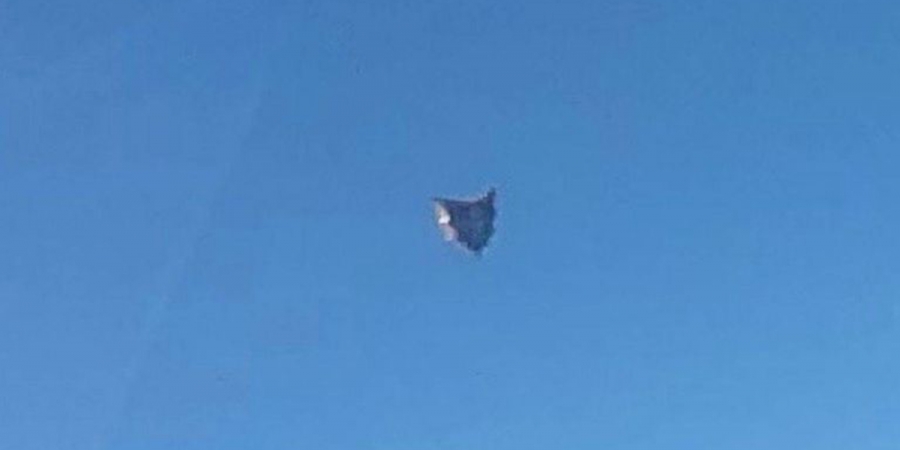 A photo recently leaked from the US military allegedly shows a triangular UFO motionless in the sky. It apparently comes from a credible source, but is it really of alien origin?
The photo is said to have been taken by an F/A-18 pilot above the Atlantic in 2018, and since the object is seen hovering above the ocean, it's lead some to speculate that not only are their alien craft in the skies, but also operating in our oceans.
It's claimed that the photo was leaked from the US government's unidentified aerial phenomena (UAP) task force, but of course when an image or video is leaked, validating its credibility can be tricky. Not to mention the likelihood of viral photos online being faked or doctored.
The photo is said to originate from a report into UAPs put together by the Department of Defense (DoD). Having been shared amongst various intelligence agencies, it's claimed that the official description of what we're looking at is a "motionless" "cube-shaped" object. Although it's clearly triangular or bell-shaped.
The website The Debrief contacted the Pentagon for clarification over whether the photo is genuine or not. Their official response stated that they do "not discuss publicly the details of reports, observations or examinations of reported incursions into our training ranges or designated airspace."
However, The Debrief's original article on the photo does state that they verified the source of the photo as a credible contact for the US intelligence community. Although the photo isn't classified as such, it is marked in the reports as "for official use only," therefore the source wanted to remain anonymous.
The photo is said to have come from a report put together by the Unidentified Aerial Phenomena Task Force (UAPTF) and was taken off the East Coast of America using a mobile phone. It was taken presumably by the backseat weapons operator in the fighter plane.
Some believe the object could be nothing more than a dropsonde, a weather sensing prob that's dropped out of an aircraft on a parachute. However if the photo shows the parachute, then the dropsonde itself is missing from the photo and there doesn't appear to be an aircraft overhead.
However, it is possible that there was an aircraft overhead or more context, but the photographer either failed to report this or perpetuated the claim of "UFO" amongst his colleagues and the gag got out-of-hand.
The pilot reported the object as being "completely motionless and seemingly unaffected by ambient air currents," but how the observer could have come to that conclusion while travelling in a fighter jet is also a little questionable.
Like all photos that reportedly show UFOs, the object in this particular photo could be anything. The image isn't clear, there is no real context and it's impossible to identify what the flying object is.
You have to ask yourself - what's more likely, that this object is a craft of extraterrestrial origin or the parachute for a weather sensor? It might not happen often, it might even be a one-off, but surely it's not impossible that the dropsonde has simply become detached from the chute for whatever reason. This is much more likely than assuming it's aliens.
Add A Comment
Tags:
unexplainedtopicalufos