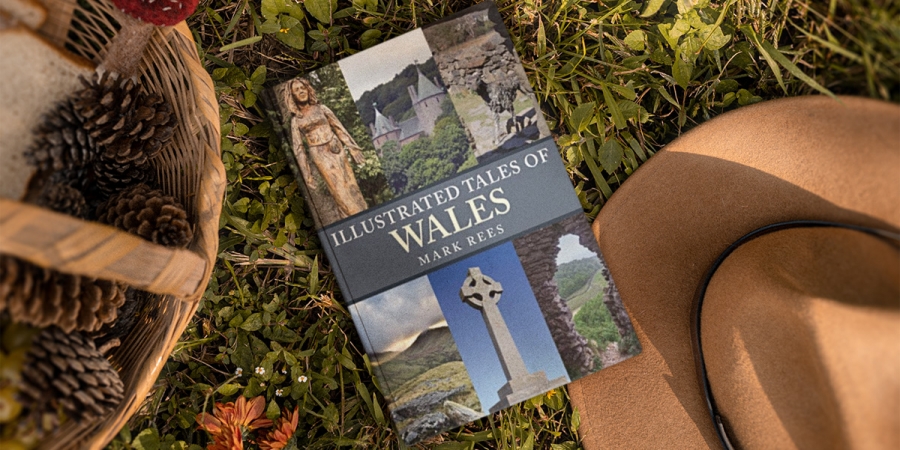 There aren't many parts of Britain that would lend themselves so well to an illustrated book of folklore and legend, but Wales is definitely one such place.
'Illustrated Tales Of Wales' is the latest book from South-Wales based journalist and author, Mark Rees, who also hosts the podcast 'Ghosts & Folklore of Wales'. His knowledge of some of the country's most unusual myths and legends are brought to life in this visually appealing book.
The book, which is a follow up to Mark's 2020 publication, 'Paranormal Wales' includes tales of fantastic beasts, mysteries of the deep and even fairies in the Swansea valley, accompanied not by drawings as the book's title might suggest, but through over 100 beautifully-shot photos.
Across its 96 colour pages, Mark explores the fantastical stories of Welsh myth and legends that have long fired the imagination of young and old alike, but he breaks from the tradition of keeping fables vague and makes them relevant to a modern reader by injecting real historical context and information on the areas where these folk legends are said to have occurred.
From the medieval tales of the Mabinogion to those rooted firmly in Arthurian mythology, they range from the quirky to the macabre and tell of heroic pets, strange superstitions, devious devils and restless spirits. With the information in this book you'll feel prepared to take off on a folklore road trip around Wales.
With atmospheric photos of some of Wales' most stunning scenery including the Cadair Idrid mountain, the River Tywi meandering through tree-covered hills of Carmarthenshire, and the impressive 80-meter-high Pistyll Rhaedar waterfall, which was once said to be home to a dragon that terrorised a near by village.
There's also beautiful photos of various well-known landmarks like the imposing Carmmarthen Castle and the fairytale-like Castell Coch on the outskirts of Cardiff, which is famed for its legend of undiscovered, hidden treasure. Plus lesser-known points of interest, like the mermaid sculpture at St. Dogmaels, the wooden likeness of a mermaid who was said to be pulled aboard a fishing boat from the waters nearby in 1789.
Wales is home to mighty giants which live on the highest mountains and battle to the death with King Arthur and his Knights of the Round Table. It has a patron saint of hares, who created a safe haven for humans and animals alike, and a patron saint of love, whose idyllic island became a place of pilgrimage. It has a water horse which has been known to give those who mount it the ride of their lives, and the unforgettable Mari Lwyd, one of the world’s more unusual Christmastime traditions in which an eerie horse-skulled visitor goes door-to-door in the dead of night.
Uncover tales of a red and white dragon fighting tooth and claw in the moonlit sky; mischievous fairy folk luring unwary travellers deep into their underground lairs; a kind-hearted mermaid saving the lives of those in peril on the high seas; and a charmed boy who transforms into an otter and a bird to outrun a wicked witch.
'Illustrated Tales of Wales' is available from Amazon now and offers an engaging and different look at Wales, with this alternative tour through the country's peculiar past.
Find out more at amberley-books.com/illustrated-tales-of-wales.html
Tags:
paranormalbookswalestopical