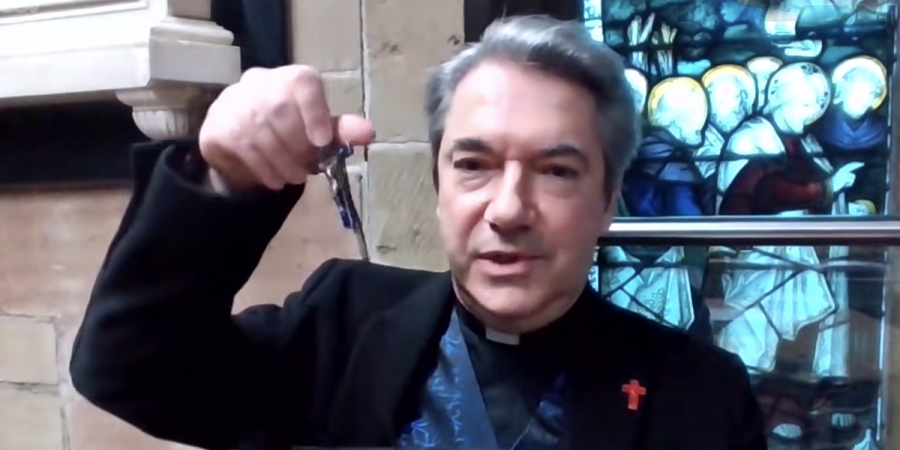 Photo: © ITV
Never afraid to tackle the weird and unusual, 'This Morning' hosts Phillip Schofield and Holly Willoughby spoke to Reverend Jason Bray about his terrifying work with ghosts as a deliverance minister.
The Anglican vicar appeared on the ITV mid-morning show to tell the fascinated hosts about his work as an exorcist, helping people to rid their home of ghosts and spirits, as well as conducting tasks more commonly associated with your average reverend such as weddings and baptisms.
Reverend Bray was promoting his new book called 'Deliverance', which documents his encounters. As Philip introduced the reverend, he said, "this has been fascinating today, we're reading all about this and there are points I need to get to big time."
Reverend Bray's journey into the world of ghosts started shortly after he was ordained and moved into a new home, where he and his wife Laura notice a constant cold and dark atmosphere. He also noticed icy cold spots forming around his newly-born son's cot. This escalated to a sense of presence and unease in the house. Bray said, "I knew instinctively that it was a priest and that actually there was quite a lot of hostility there towards me."
The terrified reverend asked his local vicar for help. He told Philip and Holly, "he looked at me he said 'well actually you could bless it yourself, you're qualified,' but he said 'no, I'll do it'."
The vicar came to the Brays' house with a bottle of holy water and a prayer book and began to bless the house. Bray was curious and followed him around. The ritual included Latin prayer which were unknown to Bray at the time. It ended with the Lord's prayer in the living room. Bray recalled, "it was like this sort of instant change. It's like instead of this house that had been cold and dark, it was suddenly warm and light."
This led Reverend Bray to explore the field of deliverance for himself and now helps people deal with similar problems in their own homes. He said, "most of the stories in the book is encounters that I have with fairly ordinary people, but they're describing extraordinary things to me. So they've had stuff around the house, that they've seen shadows, or they've seen somebody who really shouldn't be on the stairs."
Holly explains that the church avoids using the term 'exorcism' because that makes people think of demonic possessions and other negative things. She says, "you are called a deliverance minister," a role which is very much recognised by the church, but they tend to keep it quiet.
The reverend explained, "I think there is a danger of sensationalising the whole thing and what I wanted to do when I wrote the book was to sort of try to demythologise and sort of myth busting as well as ghost busting."
Holly asked the reverend if he's ever been scared at a haunted home, he said "I've walked into places that feel really creepy, yeah, a bit like our house really." At one particularly dark and dank home, Bray said he had one especially scary encounter, "as I said the Lord's prayer, I felt my back strangely arch backwards, so it was like somebody was twisting me."
Reverend Bray then showed off his exorcism kit to Philip and Holly, which included a cross, sachets of salt for making holy water, a communion kit including bread and real wine, and his most-used tool, a holy water sprinkler.
Philip asks the reverend about his success rate, "does it always work?" Reverend Bray replied, "no, it doesn't always work. Sometimes you can get situations where it's not that at all. In the book I describe going back to see somebody repeatedly, and we bless the house and it's quite clearly not a paranormal presence. It's something that's going on in her life."
Reverend Jason Bray's book 'Deliverance' is available from Amazon now.
Tags:
this morningparanormaltopical

Woman Divorced Her Ghost Husband After He Tried to Kill Her