This article is more than five years old and was last updated in December 2019. 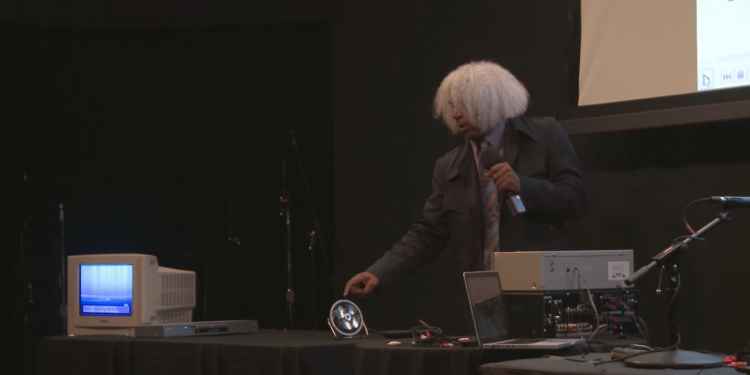 Marshall Barnes is an American research and development engineer, to date his biggest achievement is the invention of the futuristic propulsion method of "warp drive", which until now has been confined to the realms of sci-fi. Now Marshall claims to be a step closer to time travel after opening up a micro-wormhole on his desk using a small battery powered fan.
Marshall specialises in temporal mechanics, space-time geometry and quantum mechanics, and he's said to be a bit of a genius, although his field of work does include some topics which fall more into the realms of spiritualism and pseudoscience.
"Stephen Hawking is not the greatest mind on the planet, just the most intelligent comedian."
Marshall Barnes
Last year, Marshall gave a demonstrated of his latest discovery, the "Verdrehung Fan," on the internet radio show 'Ground Zero'. During the show, which was streamed live on YouTube, Marshall demonstrated the wormhole technology to the show's host Clyde Lewis and a live studio audience.
The experiment itself was pretty simple. Marshall placed the fan on a desk in front of a television screen from the 1990s, he then held the television's infrared remote control in front of the fan and demonstrated that the IR signal from the remote was being blocked by the fan... but why? Well, the infrared light was apparently not being stopped by the fan, but was in fact being sucked up into a wormhole which was being created by the Verdrehung Fan.

Photo: pixabay.com
Marshall describes the technology as being "really super radical" as it means that electromagnetic signals, such as radio waves, could be directed into the wormhole generated by a device like his Verdrehung Fan and emerge through another wormhole somewhere else in the universe which would allow for faster than light communication and possibly even faster than light travel and even time travel.
Marshall says the technology could eventually be used should we develop interstellar spaceships which can travel at the speed of light. Communications would get increasingly hard at these speeds as conventional communication travels at, or just below, the speed of light.

How Does The Verdrehung Fan Work?

The Verdrehung Fan is a highly conductive metal fan, a specially synthesised electromagnetic field is generated by a device called a Space-Time Dilator Transport System (STDTS), which oddly seems to include a cassette recorder. The device connects to the metal surrounding of the fan through a cable which creates what Marshall describes as a "special field".
Marshall claims the fan, which is spinning at 100 miles per hour, envelops the field and contracts and twists the space in front of the fan. "Torsion distortion" is being applied to the space which results in the elongation and prevention of immediate collapse of micro-wormholes.
Marshall claims that the torsion effect of his fan effects the micro-wormholes which are all around us in the quantum film of space-time. These wormholes are normally too small to interact with, in fact Marshall says many physicists don't even know if they exist or not but the fan helps keep the wormhole open and makes them bigger, eventually making them big enough to send a signal through or swallow up infrared light. Which must mean they're at least 5-6mm wide given the spread of light from an infrared diode.
Marshall believes that with an increase in size and power, his device could create a stable, traversable wormhole. The inventor says that work on a larger scale Verdrehung Fan could start as soon as late summer 2017.
Tags:
time travelmarshall barnes