This article is more than five years old and was last updated in July 2018.

This week the moment paranormal investigators have been waiting for. Irrefutable evidence of the existence of ghosts in a high quality video shot outside a store on CCTV. 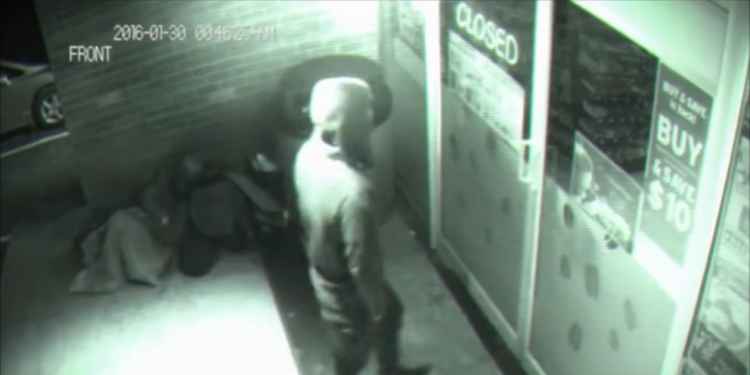 This week the internet has started to go a little bit crazy over a bizarre video which appears to show a ghost walking through the solid door of a closed shop.
But this is no ordinary ghost, this unknown spectre is actually a "time travelling ghost." We know this because from the moment the figure enters the green-tinted night vision shot the date in the corner of the screen flicks between 2016 and 2019... so obviously he's from the future then. He's probably come back to get a limited edition double-choc Kit Kat or something.
I'll let you watch the video and make your own mind up before I tell you it's utter crap and why in the rest of this article below the video...

Man Caught In CCTV Going Through Wall: See It For Yourself

The video has so far been viewed around a quarter of a million times since it was uploaded four days ago and many have been baffled by the man in a dark hoodie who appears to walk straight through a closed door, only to emerge a few seconds later chomping on, presumably, a rare Kit Kat.
Unsurprisingly, not everyone on YouTube is convinced that this is genuine ghostly footage, after all, the flash of light and the digital distortion on the footage does seem like quite a convenient way to subtly mask an edit.

So What's Really Going On Here? 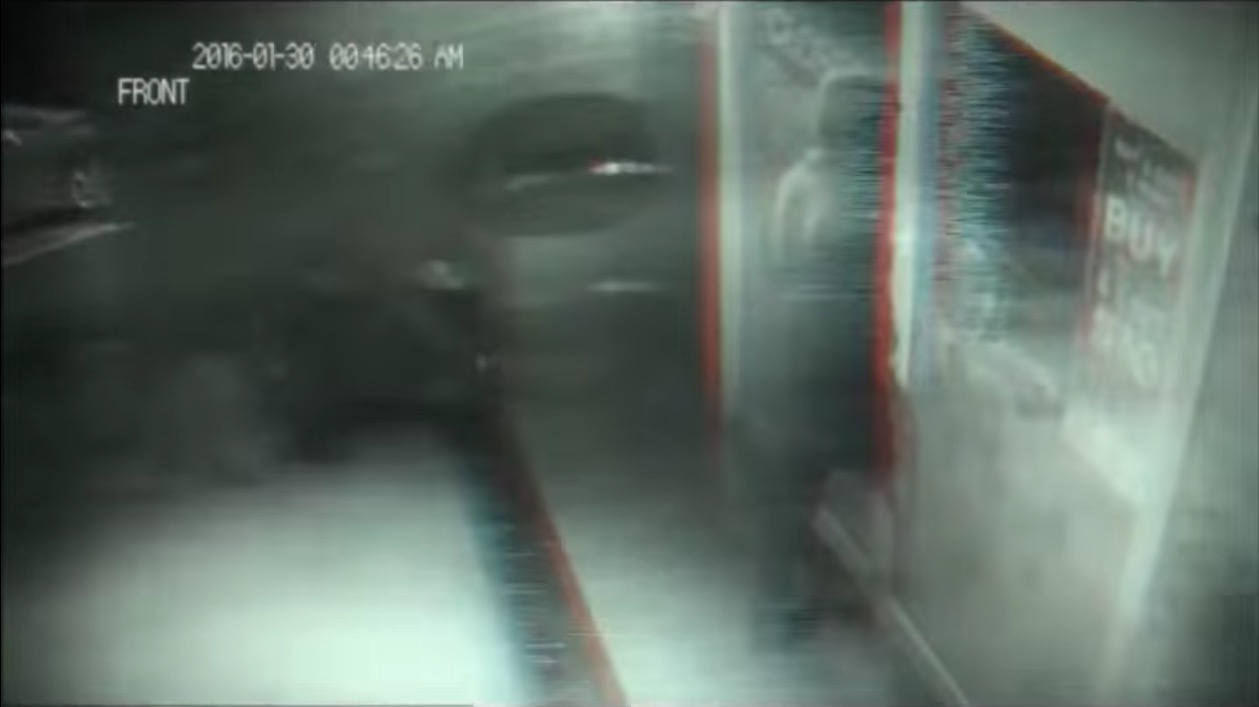 There are a few things wrong with this video for me, the main thing being the video itself, it's far too perfect.  The shot is very well framed and is captured in 720p (HD quality, higher than most average in-store CCTV cameras.)
The scene is very well set out to add credibility.  First off you have the lit up "closed" sign in the window showing you that the door is locked shut, and if that isn't enough a couple walk in to shot and leave upon realising the shop is close which reenforces that fact.  It's classic magician set-up psychology.
Next, there's two people sleeping in the doorway, they're perfectly placed to add credibility, it couldn't possibly be fake if there's two homeless men in shot right?  That would require actors.
Then there's the aforementioned flash and distortion.  By far the easiest way to hide an edit is to distract the viewer, again it's the video equivalent of slight-of-hand and it dates back to the close-up work of our magical forefathers like Paul Daniels.  Now, I'm no visual effects designer (I'm Steve Higgins) but the distortion looks like a stock effect to me, a commonly used technique.  Plus, the camera is operating in night vision mode, hence the green tint.  The camera isn't capturing the full spectrum of red, green and blue, it's just capturing an amplified overview of the light distribution across the whole colour spectrum, yet when the distortion occurs the shot breaks down in to its constituent RGB colours (note the red in the still above.)
I would bet one almond Kit Kat that what we're seeing here is two pieces of video composited together.  The first being an ordinary man (note that he has a shadow) in a hoodie walking through an OPEN shop door, the second being a static shot of the closed door.   Add them together, trigger your puff of smoke as the man walks through the door, or in this case distort the video and you've got yourself a ghost.
It all comes back to Occam's Razor.  Have you ever seen a ghost this convincing in a movie?  Yes, so therefore this video could be the result of special effect, that is a reasonable assumption to make.  On the other hand we could assume it's a ghost, this would mean we'd also have to assume ghosts exist, ghosts distort CCTV footage, ghosts like Kit Kats and ghosts can be caught on camera.  And Occam's Razor states that when trying to explain something no more assumptions should be made than are necessary.
But even without all this rational deconstruction, the thing that really shows this video up as fake for me is this... why did the ghost need a snack?  Do dead people eat?  And more importantly, if he can walk through doors what's he doing wasting his time at his local Happy Shopper?  You'd see me on Natwest's security cameras leaving the bank with a massive ghost wheelbarrow full of £50 notes.
Some YouTube commenters insist on the video's authenticity, arguing that the time stamp in the video doesn't pause or jump during the alleged special effect, but even Donald Trump could workout that the time stamp could have been placed on the video after the edit.
The more cynical commenters theories that this is probably a viral stunt for a movie or game, perhaps the upcoming release of 'Quantum Break' on XBox One.  I have to admit, this was my first thought until I looked at the channel that uploaded the video, UFO mania.
If it were a PR stunt it would either be on a bigger channel, not one with just 300 subscribers, or on its own, new channel.  So, I think this is just another case of someone trolling the gullible on the internet.
Add A Comment
Tags:
paranormalghoststime travel