Are you one of the many frustrated 'Ghostbusters' fans struggling to book a ticket for the latest movie at your local Vue cinema? Here's why screening times aren't currently available. 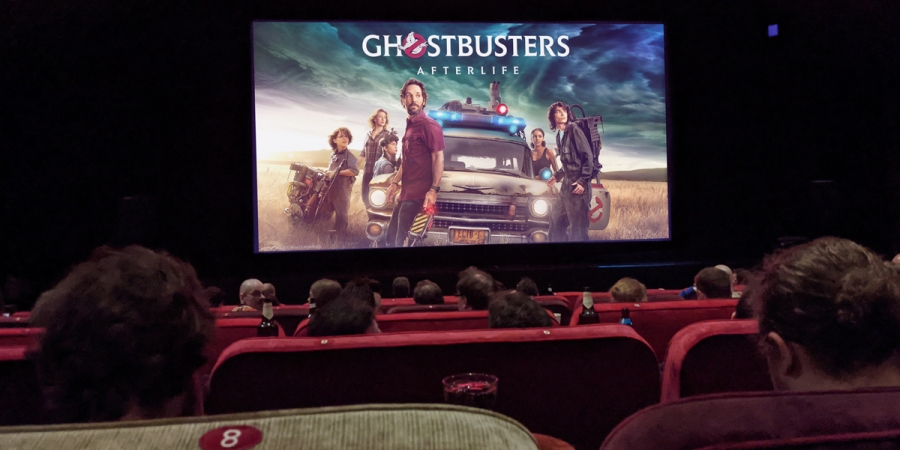 Tickets for the highlight anticipated new movie, 'Ghostbusters: Afterlife' went on sale at the beginning of the month, but despite now being just five days away from the release date, one major UK cinema chain is still unable to offer customers tickets or show times.
Vue, who have just shy of 100 theatres across the country, have told cinema goers that tickets are not yet available at any of their venues due to "distributor difficulties."
For the last few weeks, the cinema chain has been bombarded by frustrated 'Ghostbusters' fans on social media asking when tickets will be available for the movie's November 18 release.
Vue, which is the third biggest cinema chain in the UK, hasn't been very forthcoming when it comes to addressing customers' concerns and have instead copied and pasted the same stock reply, "we currently do not have a date that tickets release however, please keep an eye out on our website over the coming days for further updates."
However today the cinema admitted what some fans had suspected, that there were issues behind the scenes that were preventing the chain from confirming its screening times and putting tickets on sale.
Vue finally came clean and responded to several customers' queries, saying "we are currently experiencing distributor difficulties. We are trying very hard to resolve this as soon as we can to make sure all customers are able to watch this film. However, this is taking some time."
Some who have been refreshing the cinema's booking website had guessed that something like this might be up, as from Thursday, November 18 - the released day of 'Ghostbusters: Afterlife' - the cinema had no times for any movies listed on their website, seemingly as if they were unable to commit their screens to other films until they knew if they'd be showing 'Ghostbusters' or not.
Tickets for the movie, which stars Mckenna Grace and 'Stranger Things' star Finn Wolfhard are on sale in other chains including Cineworld, Odeon, Showcase, Everyman and Empire.
Like most disputes of this nature, things are likely to get sorted before the movie's release. The message from Vue's customer service team continues, "thank you for being patient with us, we understand the frustration this may cause."
Vue have advised customers to keep their eye out for updates about ticket availability on their website, myvue.com and on social media. You can follow @vuecinemas on Twitter, or give their official Facebook page a like.
In the movie, Phoebe and her brother, Trevor, go on a journey to uncover the lost legacy of their grandfather, original Ghostbuster Egon Spengler. As they attempt to "uncover the past" in order to "save the future."
The movie, which also stars Paul Rudd in the role of a local school teacher, is set in the rural town of Summerville. Where the new generation of Ghostbusters battle a series of paranormal events that seem to be emanating from an old mine in the small town.
Although the movie revolves around Phoebe, Trevor and their classmate known as 'Podcast', expect some blasts from the past, Bill Murray, Ernie Hudson, Sigourney Weaver and Annie Potts will cameo as their original characters in the 2021 movie.
'Ghostbusters: Afterlife' comes to cinemas in the UK this week on Thursday, November 18, and is released a day later in the US.