Why Do Ghost Hunters Use Thermal Cameras? 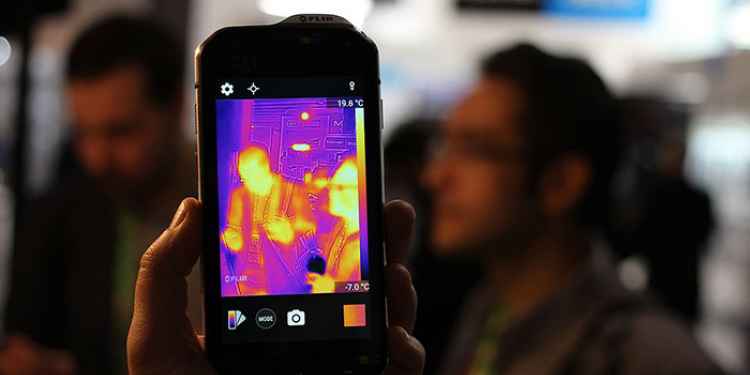 Photo: © Maurizio Pesce
Thermal imaging cameras are a popular but relatively expensive piece of ghost hunting equipment, they visualise infrared radiation on a screen to show areas of heat.
Thermographic cameras are most commonly used by firefighters to check for sources of heat in the dark or through smoke, but another application is during ghost hunts. Thermal cameras are available as either standalone units, usually handheld, or as an add on to Apple or Android phones.
It's believed that unexplained cold spots are a sign that a spirit is present, or even close to manifesting in a physical form. You should be aware of not only cold spots in a haunted location, but also unexplained hot or warm areas as this too might indicate a supernatural presence.
Because thermal imaging cameras capture the heat being radiated by an object, instead of visible light, they give the user an indication of the temperature of everything within the camera's field of view.
The temperature of objects is indicated with colours. Hot areas show as shades of yellow, orange and red, depending on how hot it is. Very hot areas will show as white. Cold areas will show as shades of blue, with very cold areas being black.
Thermal imaging cameras are able to record which means there is less need to log temperature changes when on a ghost hunt. However, as you're unlikely to be using the device continuously throughout the investigation, you'll need to make sure that the date and time is set correctly on the device to give you an accurate time reference on the video files.
It should be noted, that thermal imaging cameras don't measure air temperature, only the surface of the object it is being pointed at. Therefore, if someone reports feeling cold, a thermal camera won't give you an accurate reading of the temperature around the person.
They are also susceptible to reflection. This means that if you point the camera at a shiny or reflective surface in front of you, you may see your own heat being reflected back at the camera.
If a thermal camera is a bit out of your price range, then a cheaper alternative for detecting temperature fluctuations associated with hauntings is a thermometer. The most common type used in ghost hunting is a basic laser thermometer. These point and click infrared thermometers don't require any contact with the object they're measuring the temperature of, you simply point the device and press the trigger.
Although they are very useful for easily reading the temperature of solid object, there is one draw back. Like thermal imaging cameras, contactless infrared thermometers can't measure air temperature, only the heat radiating from a solid surface.
Another solution is to use a digital thermometer which gives you an accurate, real-time indication of the current air temperature. When using this type of thermometer, you should take care not to place it near the source of any potential draughts, like windows or ventilation, and warmth radiated from pipes, boilers, or heating ducts.
This type of thermometer is often built into other ghost hunting devices, such as EMF meters and static detectors. Some of these paranormal multi-tools will log the temperature changes and save the data on to a memory card with a timestamp.
During a paranormal investigation you should look for and log any significant temperature changes, this would be a sudden change of five degrees centigrade or more in either direction.
Using a digital thermometer to read air temperature not only helps you identify hot spots and cold spots, but can also tell you if there is an actual change in temperature or whether a member of your investigation team merely thinks they've felt a change. Paranormal investigations often involved standing around or sitting in rooms for a long period of time, during these spells of inactivity the body can naturally cool down leading people to think that the temperature around them has drop. Taking a reading of the air temperature will help you distinguish between genuine and perceived changes in temperature.
Before an investigation you should take baseline temperature readings throughout the property. But be aware that temperature will naturally change in relation to the time of the day and depending on how many people are in the room. But getting an understanding of how the temperature varies throughout the property will tell you if some rooms are likely to be naturally hotter or colder.