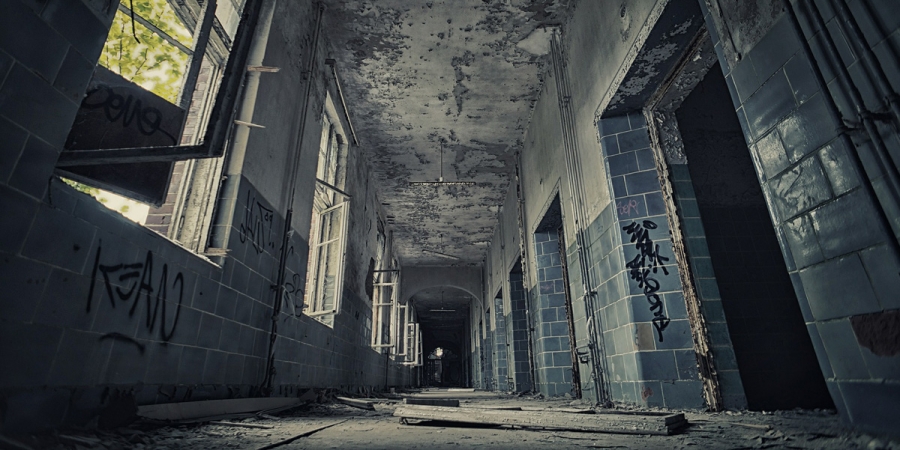 Photo: pixabay.com
Paranormal investigation is all about looking for evidence of a haunting and verifying claims of ghosts and supernatural activity. Since this evidence can be so subtle, an abandoned building where you can't effectively rule out non-paranormal explanations is pretty much the worst place you could look for it.
It's pretty common for paranormal teams to hold vigils at derelict or disused locations, but these properties suffer from countless factors that make them terrible places to hunt ghosts.
Often an abandoned building will have broken windows, missing doors, and even holes in the walls or roofs, which basically means the whole building is exposed to the elements. This means there's very little to insulate the building from noises from the outside world that might be mistaken for ghostly sounds, things like birds, screaming foxes, passing traffic or people, or noise from neighbouring buildings.
Wildlife can also easily gain access to the building, everything from rats and mice, through to foxes and birds, all of which could be responsible for sounds in the building which might be mistaken for the knocks and bangs associated with hauntings. They may even sound like the voices of spirits or laughing.
It also means you have absolutely no control over draughts, which of course could be large gusts of wind due to exposed parts of the building, cracks, gaps and poor insulation. Breezes can obviously move objects, cause doors to slam and cause parts of the building to move and creak, but wind blowing into a building can also create sudden changes in pressure and even humidity changes, two other environmental factors that are sometimes linked to hauntings.
A building in a poor condition also means leaks and water ingress, which could result in dripping sounds. The sound a drip of water makes can vary drastically depending on what it lands on. A drip on a wet carpet might sound like a high-pitched slapping sound, while a drip on an empty box could create a deep, booming sound.
Derelict buildings are often in a state of decay. There might be chunks of plaster falling from the ceilings, crumbling walls, and rotting wood breaking and creaking,
Even an abandoned building that's being maintained and has a security presence can still be in a state of disrepair. It might be cold, damp and have broken windows, but even worse are buildings which are urban exploration locations, those that have been allowed to go to ruins.
Check most paranormal YouTubers' channels and you'll find no shortage of investigations shot at urban exploration locations. These are by far the worst possible places you could search for ghosts. Not only do urban exploration locations suffer from all the problems associated with a regular abandoned building, but in the case of urbex locations you can't know for sure that there's no one else in the building.
Abandoned buildings can be used for shelter by the homeless or become a playground for vandals, you may also find people striping out old copper wires or fittings, not to mention urban explorers themselves.
Of course, all these things don't mean a building isn't haunted, but if you hear something in an abandoned building it's impossible to rule out one of the non-paranormal explanations associated with a derelict location. In situations and settings like this Occam's Razor should always be considered. This is a line of reasoning that states that the simplest explanation is usually the best.
Upon hearing an unexplained sound in an allegedly haunted abandoned building, as an investigator you need to establish if this is more likely to be the spirit of the dead communicating with you or a natural sound like a pigeon in the building.
Occam's Razor tells us that when presented with competing hypothetical answers to a problem, you should select the one that makes the fewest assumptions. In this example, there are far fewer assumptions required to come to the conclusion that the sound is caused by a non-paranormal explanation.
The ideal location for a ghost hunt is somewhere that's the complete opposite to an abandoned building, somewhere where the temperature can be controlled, draughts can be excluded, external noises can be dampened and the building can be completely locked down to eliminate possibility that other people or animals in the building are contaminating your investigation.
Tags:
ghost huntingparanormal