It's been a fun week which included a very enjoyable trip to Summer In The City with loads of great YouTube friends. 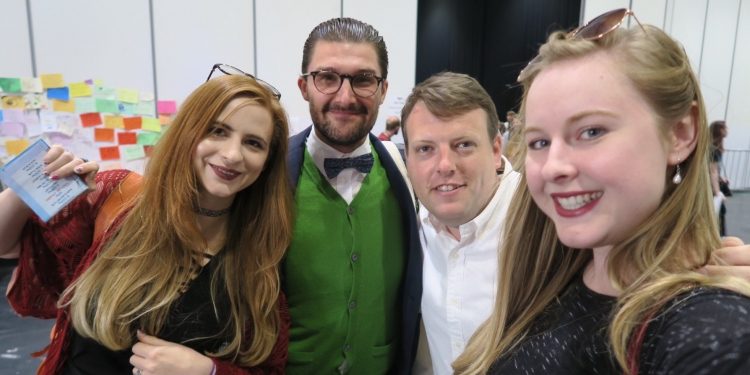 I had an amazing weekend at Summer In The City, it was my best year yet. I don't think the event itself was the best ever. In fact in some places it was a little lacking.
The last few years there's been a bigger presence of big brands at the event, like last year there was Maker Studios and Disney and the last two years PlayStation have had a play area... but this year the only network representing was Brave Bison.
YouTube's palette pyramid was a big and impressive structure but in previous years they'd have YouTube staff floating around helping people with their channels and giving out branded goodies. Two years ago they had a ton of laptops to critique Creator's channels and even giving hands-on camera demonstrations.
Creator Day, on the Friday, is always very useful and the panels are great and really informative but come Saturday and Sunday when it's general admission day fans of the Creators on the panel flood the rooms making it impossible to get into the panels you want to here. I feel some of the weekend panels should be limited to just those who have a Creator Day pass.
What made it a brilliant year for me though was that it was much more social than previous years. On the Friday I got to see my former colleague Charles which was great, in fact I bumped in to him on the way to the event. He was there with the We The Unicorns team so it was nice to meet them.
The rest of the weekend I was hanging out with friends from the excellent London Small YouTuber Facebook group. I've met a few of them before but it was really nice to spend a whole weekend with some of them and get time to know them better, especially Elana (who runs the group), Catie, Jonny and Mezza.
The guys came along and supported me in my panel and Sunday night ended with a trip to the pub near-by. Excellent weekend!

So what else has been going on this week? Well, I added a new ad format across my websites. With the increase in use of ad blockers I needed to fight back, my hosting costs are quite high and I can't afford my websites to run into a loss so wanted to stay ahead of the game.
I've noticed Taboola ads on a lot of websites, they look a bit tacky and horrible but I myself click on them sometimes, far more often than regular display ads. I couldn't use Taboola because they have a minimum traffic requirement but I found a service called content.ad which is a really good alternative.
I tested it to start with on higgypop.com, the return was actually OK and worth using so I've now rolled it out to nettleden.com, ratemycrush.com and countdowntoredcups.com. The red cups site is now entering its seasonal cycle and traffic is already starting to build before Christmas.

And finally. Over the last six weeks I've been doubling my efforts on my YouTube channel to cash in on the school holidays. I've been making two videos a week and over that time have been giving my audience the chance to win a potion set.
The reason for doing this was partly to collect some email addresses through my website to promote videos to and to create a landing page for the potion set on my website to gauge interest in it as a product.
Over 600 people entered the competition and I picked a winner at random after it closed on the 12th. I couldn't believe my luck, the winner is in the UK which saves me quite a lot of money on postage. I was especially pleased by this because 85% of my audience are in the US and the second most popular territory for viewers is the Philippines.
I revealed the winner in a video which goes live today.
Add A Comment