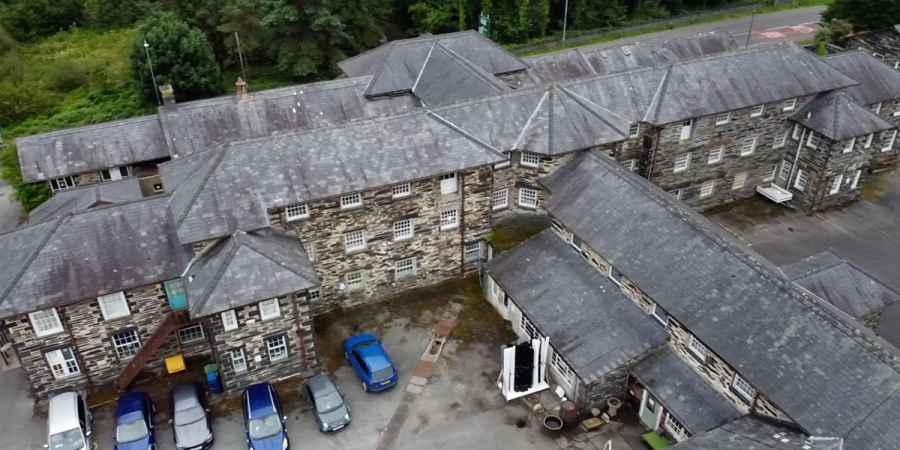 Bron y Garth is a creepy and disused former workhouse and hospital in Penrhyndeudraeth, North Wales. The eerie building and its outbuildings still have many of their fixtures intact from its time as a hospital, and original features like the vagrants cells of the workhouse still remain.
Originally built as the Ffestiniog Union Workhouse in 1838 to house the poor and homeless of North Wales, the old Victorian building would have been a grim place for those forced to live there. The most unruly of the workhouse's inmates would have been sent to the vagrants' wing, a separate building with six cells. There was also a mortuary located on the site, and a separate building known as 'the cottage', which once housed inmates with infectious diseases.
In 1954 it became a care home for the elderly, and over time was slowly converted and modernised, eventually it became the Bron y Garth Community Hospital, operated by North West Wales NHS Trust until its closure in 2009.
The buildings have been left empty and decaying for over a decade. The only visitors to the dark corridors and empty rooms over the last few years have been the lesser horseshoe bats who live in the building, and teams of local ghost hunters. Paranormal activity ranges from doors opening and closing on their own, dark shadow figures, unexplained knocks and bangs, phantom footsteps and disembodied voices.
With so much misery from suffering and incarceration from its years as a workhouse, and the many deaths from its time as a care home and hospital, it's no wonder this location appeals to paranormal investigators. Teams are especially drawn to the vagrants' wards as this is the only part of the building to remain unchanged from Victorian times and is now said to be a dark and negative place.