"The chances of anything coming from Mars are a million to one," we were once promised but now almost 120 years after the release of H. G. Wells' classic sci-fi novel, 'The War Of The Worlds' the BBC have announced they're working on a new version of the story set in Victorian Britain. 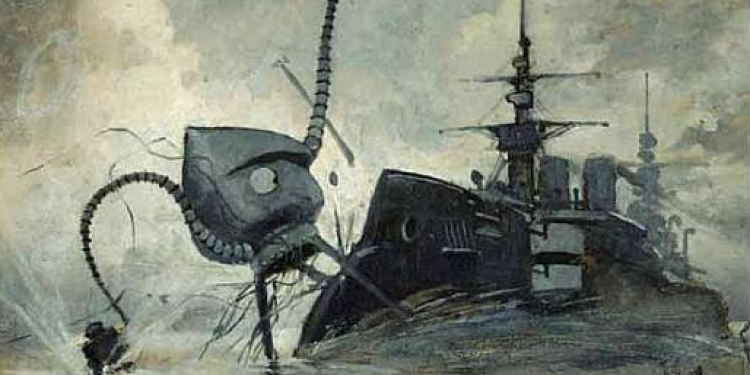 Photo: commons.wikimedia.org
The three-part drama will be the first British television adaptation of 'The War Of The Worlds,' and for the first time since the book was published, the story will unfold here in the UK in a small town in Surrey, rather than the now-famous Grover's Mill, New Jersey or other parts of the United States.
Filming starts on BBC One adaptation early in 2018 and follows one man's attempt to escape the Martians at the scene of an extraterrestrial landing at Horsell Common in Surrey. While Hollywood movies and Orson Welles' radio version of 'The War Of The Worlds' may have skimmed over the British involvement in the battle, the original story makes it clear that the British armed forces played an important role in coordinating worldwide efforts to try to stop the aliens' relentless advance.
When the Martians came to Earth in a fleet of mysterious cylinders, which were originally mistaken as flaming meteors, previous versions of the story follow those that touch down in the US, but the invasion reached every corner of the globe. The hostile spacecrafts armed with their heat rays, landed on every continent including Britain.
It was said that as the Martians swept across the country toward London, the British cabinet stayed in session, coordinating every piece of information that could be gathered and passing it on to the United Nations in New York. It was said that "it was plain the Martians appreciated the strategic significance of the British Isles" and that "the people of Britain met the invaders magnificently."
The show will be written by Peter Harness, who has previously adapted Susanna Clarke's fantasy novel 'Jonathan Strange and Mr. Norrell' for the Beeb as well as writing four episode of 'Doctor Who' including an episode entitled 'The Pyramid at the End of the World' which is due to air at the end of this month.
"I'm feeling phenomenally lucky to be writing 'The War Of The Worlds,' and blowing up gigantic swathes of the Home Counties at the dawn of the twentieth century. Wells’s book is ground zero for all modern science fiction, and like all the best sci-fi, manages to sneak in some pretty astonishing comments on what it is to be a human being too. I’m hoping to follow in the great man’s footsteps by making a terrifying, Martian-packed series which manages to be emotional, characterful, and - deep breath, dare I say it - even political at the same time."
Peter Harness - Writer
Of course this isn't the first time the book has been adapted, since its release in 1898 there has been two films and a legendary and radio play by Orson Welles, not to mention Jeff Wayne's musical interpretation of the story.
All of these previous productions have a couple of things in common, as well as all being primarily set in the US, they were all also set in the era they were produced. The original movie staring Gene Barry and Ann Robinson was set in the 1950s, a later version staring Tom Cruise was set in 2005. Orson Welles' radio version was broadcast as-live in 1938.
"No one would have believed in the last years of the nineteenth century that human affairs were being watched from the timeless worlds of space. No one could have dreamed that we were being scrutinized as someone with a microscope studies creatures that swarm and multiply in a drop of water. Few men even considered the possibility of life on other planets and yet, across the gulf of space, minds immeasurably superior to ours regarded this Earth with envious eyes and slowly and surely they drew their plans against us."
Jeff Wayne - 'Eve Of The War'

Orson Welles' Radio Version Of 'The War Of The Worlds'