Meet The Cuddly Bear Who Can Detect Ghosts 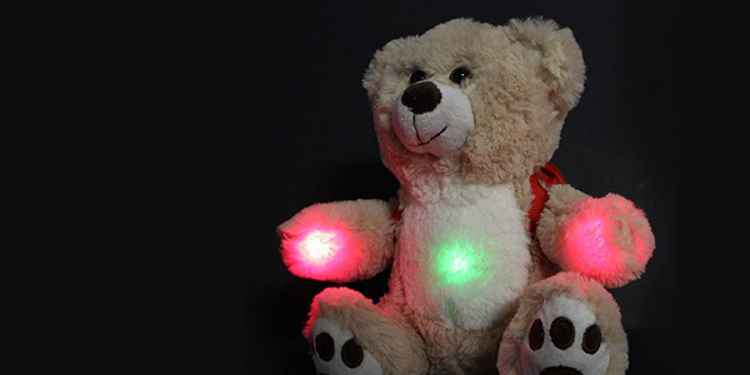 Photo: amazon.com
When you think of ghost hunting gadgets, you probably think of flashing lights, knobs to twiddle and geiger counter-like tones, but what if there was a paranormal gadget that you could cuddle up to at night? Well, that's exactly what BooBuddy Bear is.
This interactive plush bear isn't designed for young children to play with, but young ghosts. Using a trigger object is pretty common when conducting a paranormal investigation and this bear is the ultimate trigger object. A trigger object can be anything that a spirit can interact with, such as a ball, a crucifix or a coin.
A lot of parapsychologist think that the best way to encourage the spirits to engage with the object is to pick something which is appropriate to the location and the spirits which are believe to haunt it. For example, in a prison you might use a bunch of keys or in a location with a military history you might use a medal.
If you want to attract the ghosts of children, then what could be better than a cuddly approachable bear? The BooBuddy Interactive Bear is smarter than he looks. Wrapped up in his fluffy exterior the bear, who is 25cm tall when sitting, has an in-built electromagnetic field meter (EMF), a thermometer, a vibration detector and has in built phrases designed to encourage spirit communication. All its electronics are completely hidden inside his fluffy fur skin.
The reason BooBuddy works so well as a trigger object is because a bear is non-threatening and child-friendly. It's also an advantage that it doesn't look like a regular ghost hunting gadget, as these might appear quite strange and alien to a spirit from the distant past.
BooBuddy is a custom-made piece of ghost hunting kit, made by the US company, GhostStop. The idea is to sit the bear in the room you're investigating and turn the lights off and the bear on. Once he has performed his baseline tests, he will then introduce itself as an indication that it is running and ready to detect the disturbances commonly associated with hauntings.
The bear has lights in his arms, which respond to spikes in the EM field. Unlike other ghost hunting gadgets, BooBuddy will speak to you in most instances when a change to the atmosphere occurs, with a bank of almost 40 responses. For example, if the temperature changes, he will say "brr, it's cold in here" or "did you make it warmer in here?" If he is suddenly moved, he'll giggle and declare "that tickles!" or say "I like holding hands with you."
The fluffy device comes with his own little backpack, which is useful for holding spare batteries. He's capable of investigating on his own and will even call out to the spirits, asking questions like "do you want to be my friend?" or "do you know your ABCs?" This means he can be left in a room alone with an audio or video recorder rolling to capture any paranormal responses.
The tool's creator, GhostStop's Shawn Porter says, "it's not just a toy, it's an investigator." They have designed the plush bear to be a part of the investigation team, rather than another piece of kit. He added, "we get the opportunity to work with paranormal investigation teams all over the world every day," and this is what gave them the insight to create the bear.
Reviews of the bear are generally positive, one happy customer said "BooBuddy is one of my favourites, we take this on every investigation and have had great results from lots of different spirits." Although others point out that a bear as a trigger object doesn't work in every location, but is great for helping to track down the ghost of children. He's the talking bear every investigator wants on their team.
BooBuddy Bear is already selling in the US, but unfortunately although it does ship to the UK, the cost of postage is almost as much as the cost of the bear itself making it a very expensive piece of kit for British paranormal investigators. But, look out for the bear in the upcoming British movie, 'The ParaPod'. You can buy your own bear direct from GhostStop by clicking here.
Tags:
paranormalghost hunting