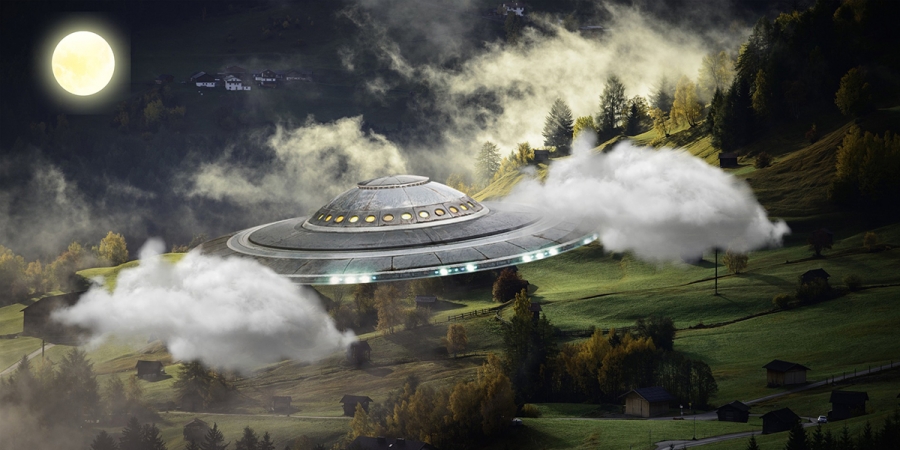 Photo: pixabay.com
Earlier this month President Trump signed an emergency relief bill committing $2.3 trillion to help the country recover from the coronavirus outbreak.
The 5,600-page document contained a few linked requests, some of which weren't directly related to the COVID pandemic, one of which relates to the intelligence agencies research of UFOs.
The document asked almost all of the US intelligence agencies to submit an unclassified report on all they knows about unidentified flying objects to the Senate intelligence committee within 180 days, with details about the US government's task force researching Unidentified Aerial Phenomena (UAPs) - more commonly known as UFOs.

The Pentagon briefing must include "a detailed analysis of unidentified aerial phenomena data and intelligence reporting collected or held," as well as "identification of any incidents or patterns that indicate a potential adversary may have achieved breakthrough aerospace capabilities that could put United States strategic or conventional forces at risk."
Nick Pope, Britain's leading expert on UFOs and a former employee of the Ministry Of Defence, tweeted about the request. He wrote, "there's still some confusion over the status of the UFO report requested within 180 days of enactment of the COVID-19 relief bill. People are asking if it's legally mandated, as it wasn't in the bill, but was linked to it by a Senate Intelligence Committee directive."
He clarifies, "this is Director of National Intelligence lead, so I reached out. An office of the Director of National Intelligence spokesperson told me yesterday 'we are aware of the requirement and will respond accordingly'. I asked if 'respond accordingly' meant the Director of National Intelligence would comply and provide the report. Their response: 'Yes'."
A US defense spokesperson told The New York Post, "we are aware that the Senate Select Committee on Intelligence committee report on the Intelligence Authorization Act for fiscal 2021 included a requirement for the Director of National Intelligence, in consultation with the Secretary of Defense, to submit a report on unidentified aerial phenomena (UAPs) within 180 days of enactment."
That means the Director of National Intelligence will have to consult with various top defence officials and spy chiefs to put together the report that should cover "observed airborne objects that have not been identified" and offer "detailed analysis of unidentified phenomena data" collected by various means including geospatial intelligence, signals intelligence, human intelligence and measurement and signals intelligence.
If you can't wait until June for the briefing, there's good news. Just last week the website The Black Vault made every single publicly available CIA document on unidentified flying objects available to download in one place. The documents are the result of multiple Freedom Of Information Act (FOIA) requests made to several government agencies over the past few decades. For the first time ever the complete archive of all documents that specifically relate to UFOs have been published together, a total of 2,780 pages.
These documents go as far back as the 1950s, right through until the late-1990s, but the US government has released the odd titbit of UFO info recently too. In early 2020 they released verified videos of UAPs captured on camera by Navy pilots. The Pentagon later acknowledged that the Unidentified Aerial Phenomena Task Force were still actively investigating such encounters.
Add A Comment
Tags:
ufostopical