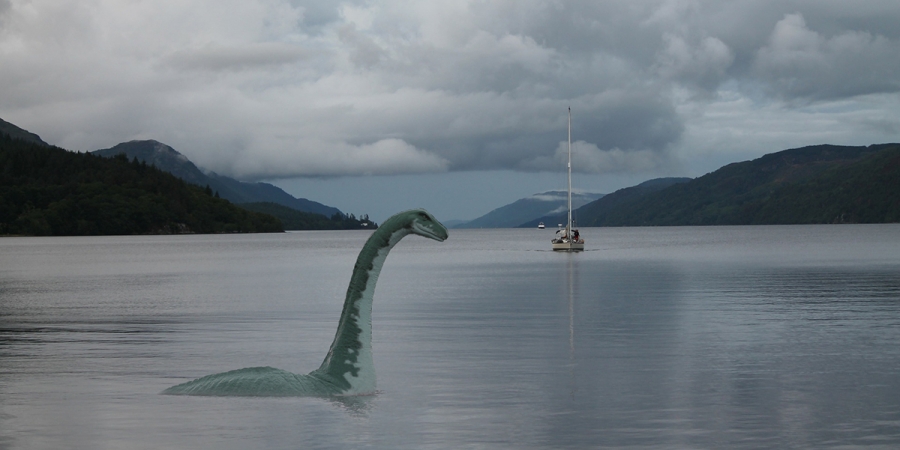 We all know the Loch Ness monster is pretty elusive. Nessie is rarely spotted and always fails to leave any evidence of its existence behind, sound like anything else? Ghosts.
If Nessie is a ghost, it would explain why it's so hard to get a glimpse of the beast and even harder to capture it on camera. With reports from more than 1,000 people who claim to have spotted the monster dating back to the sixth century and continuing to this day, this would also explain how a single creature could be spotted over so many years.
Just like ghosts, sightings of Nessie are few and far between and tend to be anecdotal. The only evidence that exists of the beast is unsubstantiated and poor quality video footage that proves nothing and photographs that are hard to make out.
Scientists have widely dismissed Nessie as a mix of folklore, misidentification and hoaxes, but this is also how most scientists categorise ghosts.
But, if the famous Scottish monster is a ghost, then what was it when it was alive and how long ago was it swimming around the loch?
It's often said that you never see the ghost of a dinosaur, but what if that's exactly what the Loch Ness monster is? About 65 million years ago there was a Nessie-like creature that was found in the oceans all around the world. It was called the plesiosauria, not strictly a dinosaur, but a prehistoric marine reptile from the Jurassic period.
This idea is not a new one. In fact the CIA questioned the possibility in recently declassified documents detailing experiments carried out by an American team of "psychic spies" at some point between 1972 and 1984. One of the men involved, Ed Dames, apparently used his "ample spare time at the unit" to perfect the skill of remote viewing in order to exercise his own "spiritual and extraterrestrial interests."
He claimed he focussed his gift on several 'targets' around the world and saw apparitions of the Virgin Mary, and the demise of Atlantis, which he said is "at the bottom of Lake Titicaca." He also said he saw a great many flying saucers, but also Nessie, which Dames claimed was a dinosaur's ghost.
The idea of seeing the ghost of an animal isn't a new concept either. There are countless stories of people seeing the ghosts of their pets. There's a castle in Wales which is said to be haunted by the laughing ghost of a murdered pet monkey, and even the Tower Of London is haunted by the ghost of a bear.
There were over 700 species of dinosaur that roamed the Earth for over 150 million years, making human's mere 200,000 years of existence look like a blink in their eye. So, if we see ghosts of humans, then surely we should see the ghosts of dinosaurs - if ghosts exist, that is.
The major factor that would rule out the possibility of seeing dinosaur ghosts is the fact that the ground level has changed a lot since dino times, hence their fossils generally being found deep underground, but in a body of water this might not be the case. Although the water level will have changed over the years, there has always been water there.
The reason we don't see more phantom dinos could be due to the fact that ground level has changed a lot since dino times, hence their fossils generally being found deep underground. We know ghosts tend to haunt on their former plain of existence, so if the ghosts of dinosaurs were still wandering around, they'd be doing it underground.
It could also be because that dinosaurs weren't ever emotionally or spiritually developed enough to be able to return as a spirit. It's possible that dinosaurs lived at a time long before complex emotions existed in animals, especially given that no animals have human-like emotions even today.
But perhaps Nessie has found a loophole and returned thanks to stone tape theory. This paranormal concept states that energy or strong emotions can be "recorded" by the surrounding environment. It's most commonly believed that it is the stone and even the ground at the location that can store these energies. When the conditions are right, the energy can be released by the material and the event is replayed.
Another theory that could be relevant to a spectral Nessie is that ghosts are attracted to water and that locations that are close to a source of water are more likely to be haunted - properties next to a well or near a static body of water, for example. Going back centuries, ghosts have been strongly associated with rivers, lakes, and wells.
Whether the ghost of a dinosaur exists in the loch or not is up for debate, but what seems clear is there is no living monster there. In 2019 a team of researchers identified exactly what lives in the murky waters by collecting DNA samples from the lake over a two-week period. They found there is no monster hiding in the loch and said that people might be seeing giant eels.
The technique allowed the team to capture and analyse tiny organic fragments left behind by creatures as they swim through the water. They also ruled out the possibility that the monster could be a plesiosaur, a large catfish or a wandering Greenland shark.
One final thought. If we could be mistaking the ghost of a dinosaur for the Loch Ness monster, what does this mean for the equally elusive Bigfoot? Is it possible that Sasquatch is the ghost of a neanderthal?
Tags:
unexplainedsciencescotlandcreaturesparanormalanimalsghosts