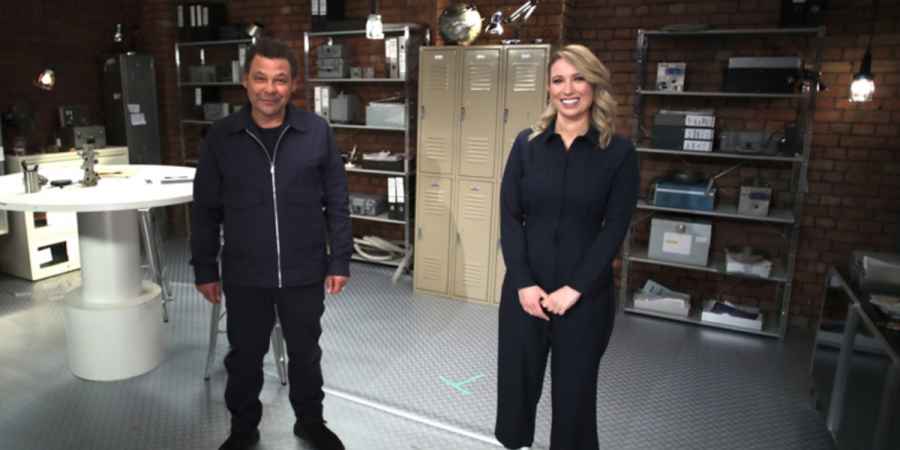 Photo: © Sky History
Craig Charles, star of the cult sci-fi comedy series 'Red Dwarf', has teamed up with renowned space journalist, astrophysicist, and award-winning author Sarah Cruddas to host a show exploring some of the most remarkable UFO sightings from around the world.
'Craig Charles: UFO Conspiracies' airs on Sky History on Tuesday nights at 9pm. The first episode premiered this week, but will be repeated on Saturday, January 15. Each episode is also available to stream on demand for subscribers of Now TV.
The pair hope to separate fact from fiction in their specially created UFO Hub, while the BBC 6 Music DJ is a firm believer in extraterrestrial visitation and a long-time UFO enthusiast, Sarah is a little more sceptical about the likelihood that alien craft have visited Earth.
Together they will scrutinise compelling evidence relating to some of the most perplexing UFO encounters of recent years, with help from well known ufologists, whistleblowers and first-hand witnesses. Throughout the series they will reveal never before heard testimonies and examine formerly classified military documents.
Will these perplexing UFO encounters of the past and present enable Craig and Sarah to determine whether the unexplained aerial phenomena prowling our skies is extraterrestrial and perhaps even answer the big question, are we alone in the universe?
Craig told iNews, "it's hard not to think, 'well, what is out there?'," he explained, "that stigma needs to go because we're only just beginning to scratch the surface of what is out there."
Craig added, "we need to take sightings seriously, particularly from credible witnesses, even if we can't explain them. Now we're starting to realise how much else is out there in the universe, the subject is becoming less of a joke."
In the show's first episode the pair hear evidence about a major UFO incident that took place in Wales in 2016. Multiple witnesses in and around the village of Pentyrch, South Wales, saw a vast triangular object appear in the night sky, ejecting smaller red and green craft before engaging in a battle with the RAF, culminating in its apparent shooting down.
The duo examine video evidence of the alleged UFO crash site and consider natural phenomena before speaking to UFO investigator Gari Jones from the Swansea UFO Network, who has failed to get a clear explanation from the military of these events.
Next time, Craig and Sarah scrutinise an astonishing case that took place in November 2018 off the west coast of Ireland, in which multiple pilots saw bizarre lights through their cockpit windows. Ted Roe, Director of Research at the National Aviation Reporting Centre shares extraordinary insights into the sighting, while an ex-Nato air traffic controller - under the cover of anonymity - acts as a whistle-blower, spilling more secrets of the sky and the shocking lengths that governments are prepared to go to hide the truth.
'Craig Charles: UFO Conspiracies' airs on Sky History on Tuesday nights at 9pm with each episode is also available to stream on demand for subscribers of Now TV.
Tags:
unexplainedtopicaltelevisionufos