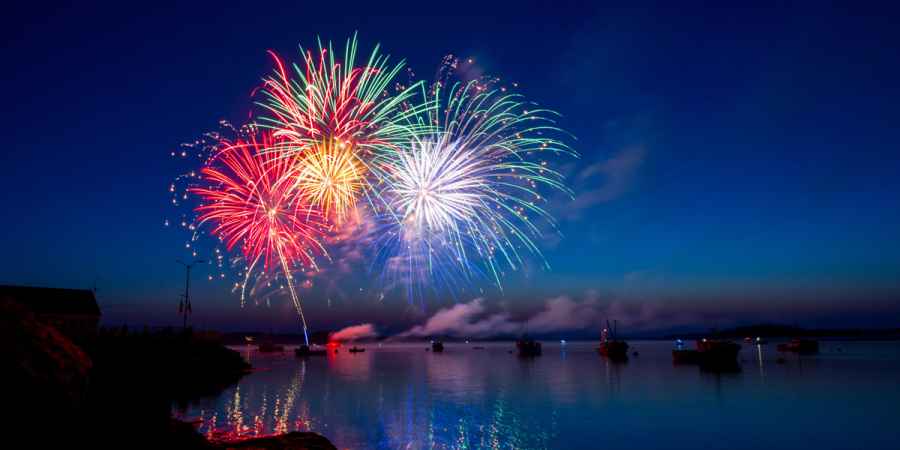 Photo: © Ray Hennessy
It's commonly said within the paranormal community that hauntings increase as a result of various types of energy, given that during a firework display explosive bursts of light and sound are kicked out into the atmosphere, could a display be enough to give supernatural entities a boost and increase strange happenings?
Depending upon what you believe, the simple answer is yes as a firework display does produce a significant amount of energy. The average 15-minute-long display would probably produce about the same amount of energy it takes to power a family home for about 90 minutes, but it's not quite as simple as this. Keep reading to delve deeper into the science of the paranormal relating to fireworks.
There are anecdotal claims that more paranormal incidents are reported as a result of other high-energy events, such as thunderstorms and even heatwaves. Some ghost hunters even use EM pumps to generate energy in the form of an electromagnetic field. Just five commercial display fireworks produce one megajoule of energy, this is roughly equivalent to the power required to play games for an hour on a Playstation 4.
Paranormal investigators think that the lingering energy of a living human can exist outside the body after death and that spirits draw on any source of energy in order to replenish them. This could include feeding on the energy from electrical circuits, thunderstorms and even the fireworks.
Since the fundamental laws of physics tell us that energy can't be create or destroyed, only converted from one form to another, then it's fundamentally possible that the light, heat, sound and kinetic energy from a firework display could be converted into a form that fuels hauntings - although it should be noted that no one knows for sure exactly what type of energy spirits consist of, if any at all.
However, if there is a supernatural mechanism to convert the energy from fireworks in to spiritual energy, the problem is it's not going to be very efficient. When a firework detonates in the air all its energy is instantly lost into its surroundings. This takes the form of heat and light, plus mechanical energy in the form of sound and a shockwave through the air.
Because the energy shoots out in all directions from the point of detonation, it gets increasingly weak as it travels. This is called the inverse-square law, which tells us that every time the distance from the exploding firework doubles, its effect become four times less powerful. This means that a firework detonating at a height of around 100 meters wouldn't appear much brighter than a candle for an observer, or spirit, on the ground. Therefore, even if the fireworks were being launched from the roof of a haunted building, that building would actually be getting more energy from the streetlights outside and its own electrical wiring throughout the building.
So, scientifically speaking, even if a spirit could use the energy from fireworks, it wouldn't give them a lot to feast on, but this isn't the only sort of energy generated as the result of a firework display.
Whether it's family or a few friends gathered for some garden fireworks or thousands of people who have come together for a public display, the one thing that all these shows have in common is that they bring people together, stir emotions and elicit positivity within the spectators.
Emotions and positive energy are said to drive hauntings and increase activity, especially on a ghost hunt. This might make sense as a paranormal theory, but it seems unlikely that a group of spectators at a firework display could have an impact on a haunted building in a real-world situation, unless they were watching the display from within the building itself.
There is one final thing to consider. When professional fireworks are launched a tube is used, the force of the projectile leaving this tube can produce an inaudible sound as low as around 15 Hz. Any low-frequency sound below the lower end of the human hearing range of 20 Hz is called infrasound.
While infrasound isn't known to cause hauntings and isn't paranormal in nature, these low frequency vibrations can cause people to have experiences similar to those associated with the paranormal. This can include feeling discomfort, disorientation, or panicked, as well as having an increased heart rate and blood pressure. In extreme cases infrasound has been linked to feelings of depression, a general feeling of unease, as well as visions like apparitions.
So, while a firework display might not up the spooky activity, it might make you experience more unusual things.
Another possibility is that ghosts might just come out to watch the display in the same way we do. Perhaps they're simply awoken by the loud bangs and flashes of light. The living can't resist moving to the nearest window to see what's happening when fireworks light the skies outside, so why should the dead be any different?
The best way to find out if fireworks really do affect the amount of paranormal activity is to test the theory yourself, so why not grab your ghost hunting tools instead of a sparkler this November 5.
Tags:
paranormaltopicalsciencebonfire