Quantum Paranormal have released a mobile application called Ghost Code which is said to instantly increase paranormal activity, we put this extraordinary claim to the test. 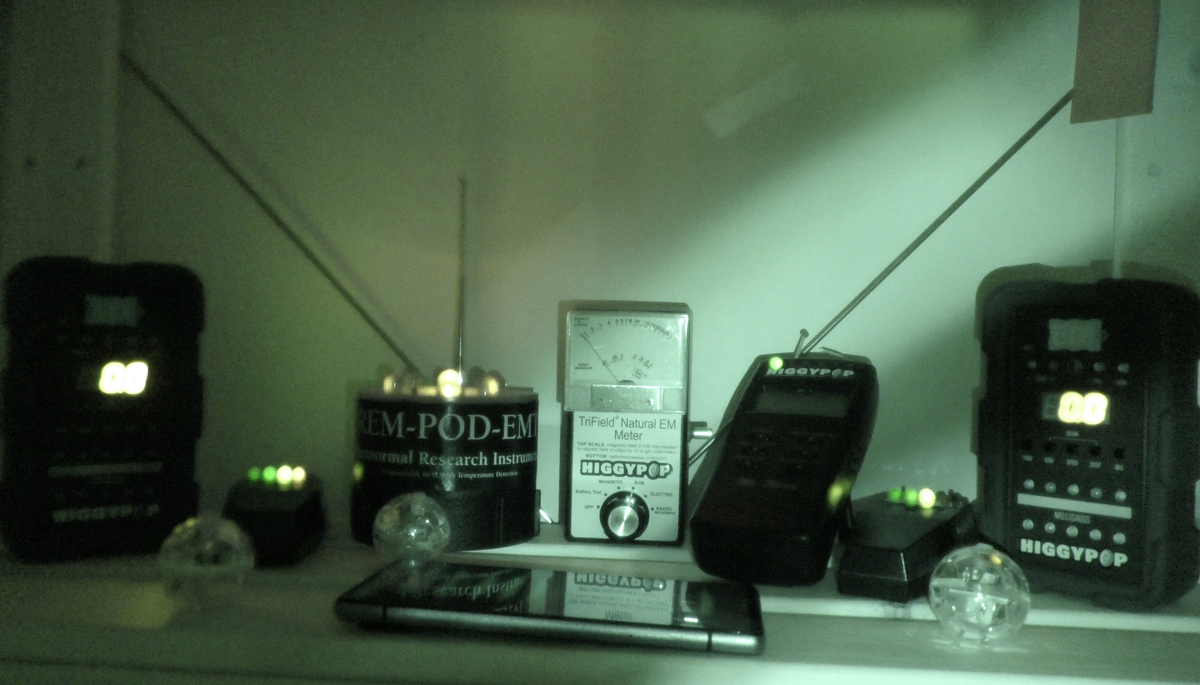 The Ghost Code is available now for Android from the Google Play Store. It is said to be the only phone app in the world that can evoke paranormal activity in seconds.
It was created by paranormal researcher, Patrick Jackson, who believes that his app is capable of increasing paranormal activity on demand, but extraordinary claims require extraordinary evidence.
Patrick has presented some very questionable evidence of the app in use, but the evidence to date fails to quantify the claim that the app increases paranormal activity. The previous examples are very unscientific, make no attempt to measure changes in the amount of activity. Since the app is being used at a haunted location, how do we know this isn't just the normal base level of activity?
I wanted to find out for myself and put the app to the test. I wouldn't say I conducted a scientific test, because the ghost hunting devices I used are very non-scientific and prone to false positive, but it was a controlled experiment. The devices I used are the same that are commonly use, so my aim is really to measure what affect the Ghost Code has on these devices being caused to trigger. 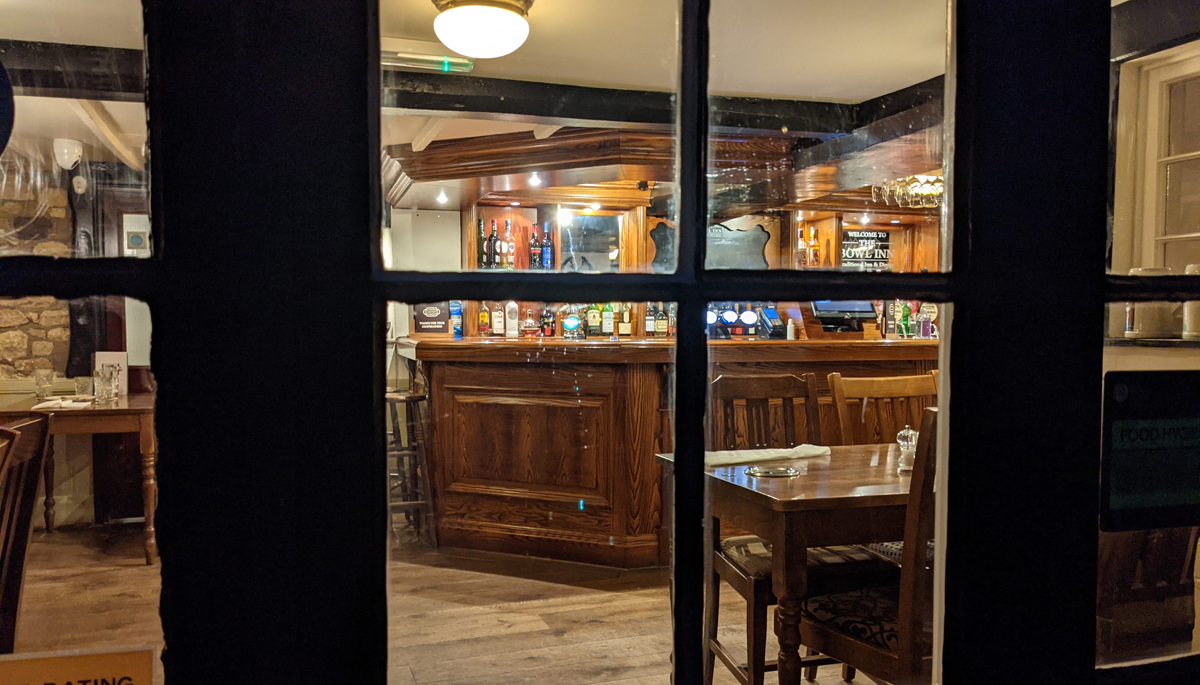 Patrick claims that the app works anywhere, he's even had results in his own back garden, but to give the Ghost Code the best chance of working, I took it to a haunted location.
I picked a local pub which has decades worth of reported paranormal activity and has even run ghost hunting events and paranormal themed evenings of entertainment. The brewery no longer likes the pub to promote this side of the building's history, so the landlord has asked me not to name the location, but as a regular I was permitted to discreetly conduct my experiment there.
The app's instructions suggest that it should be used after midnight, unfortunately I was unable to access the building at this time, but since the pub's staff have only ever reported activity during business hours i.e. before midnight, this shouldn't be a problem.
The tests were carried out in the kitchen's store room, a staff only area of the pub with thick walls, no electronic equipment and the room was situated at least 20 meters away from staff and drinkers. No one was using walkie-talkies or any other transmitting devices within this 20 meter exclusion zone. This made the pub's store room a more robust test location that other places where the app has been tested, most notably at 30 East Drive, which is a normal terraced house with neighbours living in the adjoining property just meters away for where tests are conducted.

Several pieces of ghost hunting equipment were turned on and placed on a shelf in the store room. A Google Pixel 6 phone was placed in front of them with Quantum Paranormal's Ghost Code app installed. For half of the experiment the app wasn't running, for the other half it was. The idea being that I would be able to compare the number of times the ghost hunting gadgets were triggered with and without the Ghost Code playing. 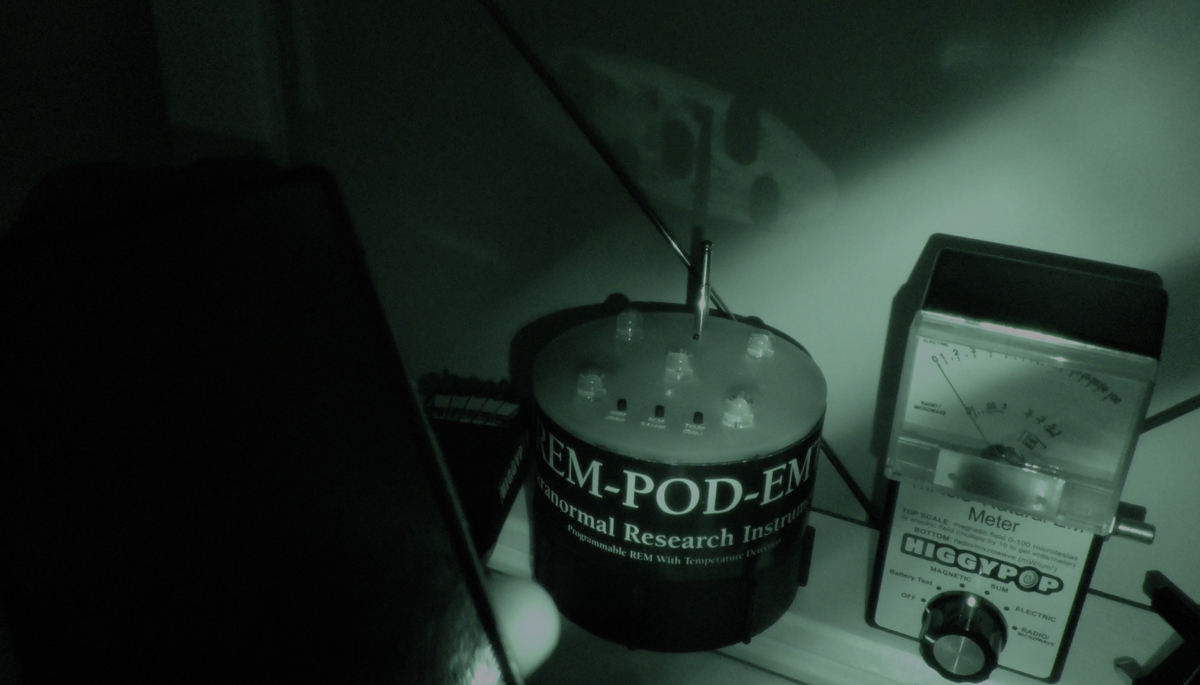 This test was designed to establish the devices' likelihood to trigger without the app's influence.
After the ghost hunting equipment had been given time to acclimatise to their surroundings, the first 15 minute test began. In this test the set up was left alone in the room in silence for the duration of the test.
At nine minutes and 48 seconds both of the K-II meters flashed up to full (20mG+) five times in quick succession. Neither the TriField meter or the EDI+ recorded a spike in EMF, which would suggest that this was actually radio frequency interference (RFI) caused by a manmade transmission such as a mobile phone or walkie-talkie, this form of RFI is something that K-II meters are more susceptible to than the TriField and EDI+.
The K-II meters triggered once. No other activity was registered on the ghost hunting devices or captured by the camera.

This test was designed to establish the devices' likelihood to trigger without the app's influence while an investigator was calling out to encourage activity.
The equipment was unchanged in this test and again the app was not in use. The only difference was that over the 15 minutes I called out with seven pre-written statements commonly used by ghost hunters leaving a two minute gap for responses between each.
No activity was registered on the ghost hunting devices or captured by the camera. 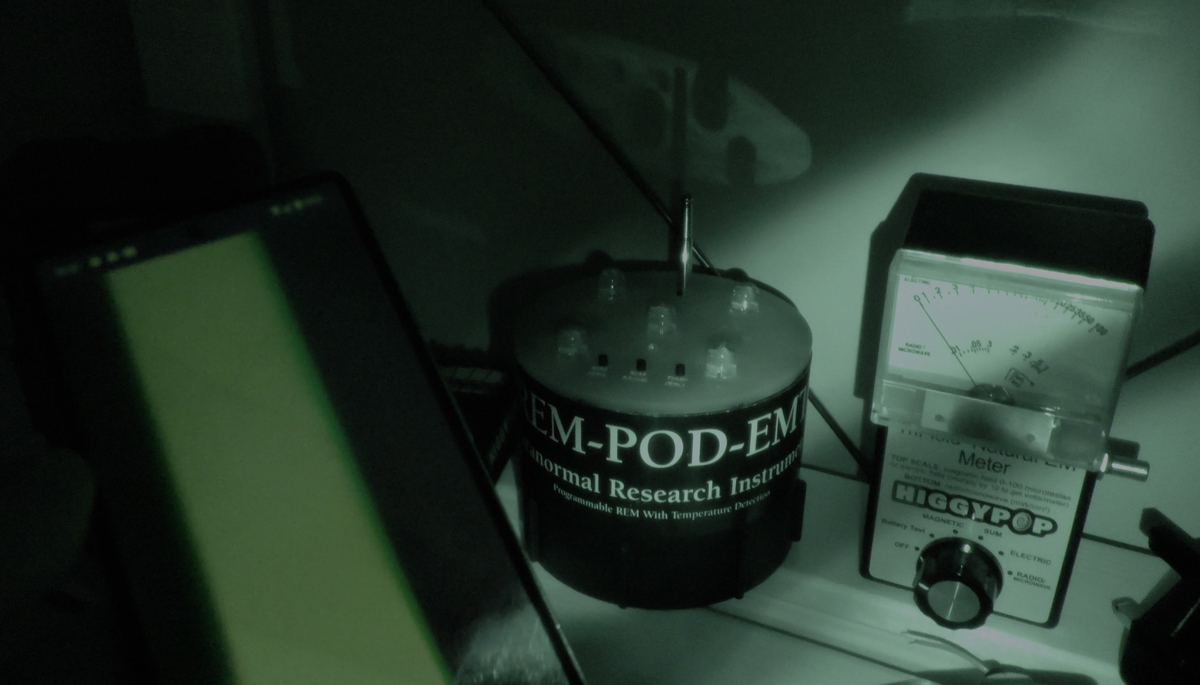 This test was designed to record any potential increase to the number of times the devices' trigger due to the app's influence.
For this 15 minute session the set up was exactly the same as in test one, the only difference is that the Ghost Code app was now playing. Unfortunately, I quickly found that the app times out and stops emitting its code after five minutes, which meant I had to break the lockdown in order to return to the room every five minutes to restart the app. When I open and close the door of the room the pressure indicator on the EDI+ lights (top of the device). This shouldn't be mistaken for paranormal activity, this is merely due to the pressure change caused by the door opening and closing. The movement also cause the geophone indicator on the EDI+ to light up (bottom of device).
No activity was registered on the ghost hunting devices or captured by the camera.

This test was designed to record any potential increase to the number of times the devices' trigger due to the app's influence while an investigator was calling out to encourage activity.
The set up for this test was exactly the same as in test two, the only difference is that the Ghost Code app was now running and over the 15 minutes I called out with seven pre-written statements commonly used by ghost hunters leaving a two minute gap for responses between each.
Once again I had to restart the app every five minutes, but because I was already in the room so that I could call out there is no issue with the pressure or geophone lights flashing in this test because the door of the room remains closed at all times.
At five minutes and 47 seconds into the test both of the K-II meters flashed up to full (20mG+) five times in quick succession. Once again this EM spike wasn't recorded on any other device suggesting RFI is to blame. The incident seems to tie in with the moment that I reach over to restart the app.
The K-II meters triggered once. No other activity was registered on the ghost hunting devices or captured by the camera.

1. If there's anyone here with me, can you give me a sign by lighting up one of these devices?
2. Please could you try to touch one of the devices on the shelf, they won't hurt you.
3. Could you try to communicate with me by making the green light flash.
4. If you move towards the green light you can make it change colour to show me that you're here.
5. There's a box with a little orange number on it, can you try to make it hotter or cooler to change the number?
6. If you're here with me can you move toward the lights on the shelf and try to affect them please?
7. If you can hear my voice, please move towards the lights and try to make them flash.

How I Made It A Fair Test

In order to make things fair, the equipment was left in the room for an hour before the experiment began to allow it to acclimatise and calibrate in order to minimise false positives.
During the one-hour-long experiment that equipment was left in the same position, was not touched and I did my best to ensure the same atmospheric conditions were maintained i.e. ensuring the room was unheated, and that doors and windows were closed.
During the tests where the app wasn't running, the phone with the app installed sat idle next to the ghost hunting devices in the same position it would be in when the app was running. In both cases the phone was switched to flight mode to avoid unwanted emissions triggering any of the ghost hunting devices.
Each test was timed and limited to 15 minutes so there was equal opportunity. In the tests where I called out to encourage paranormal activity, I read seven pre-written questions from a script. The first was read at the one minute mark, subsequent questions were read after a two minute gap. The same process and script was used in both tests.
The tests without the app were conducted first so I could rule out the possibility that the app had called forward paranormal entities that would linger into the tests without the app.