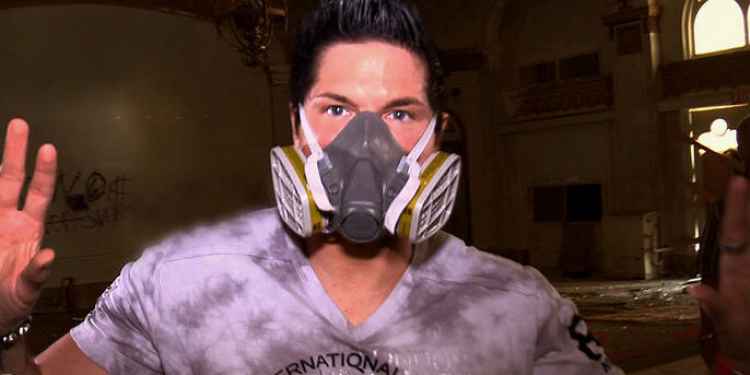 If you're a fan of paranormal television shows, then you may have noticed that at certain locations investigators wear protective face masks, but why do ghost hunters need this piece of protective kit?
Zak Bagans from 'Ghost Adventures' has been seen wearing a mask on several occasions, including in the season eight episode of the show filmed at 'Missouri State Penitentiary'.
In the case of the former prison, there was something more dangerous than ghosts floating through the air. Like a lot of abandoned buildings, the penitentiary is susceptible to mould. Some moulds and funguses reproduce by releasing tiny spores into the air. These spores are so small that they have to be magnified hundreds of times before we can even see them.
About one in five people are allergic to mould spores, but even those who aren't allergic may be at risk, some species of mould contain a toxic compound called mycotoxins.
These toxins can cause symptoms including headaches, fatigue, coughing and sneezing, and is very dangerous for asthma sufferers, young children and the elderly. Some moulds and funguses can trigger significant mental or neurological symptoms.
Mould spores aren't the only hazard associated with abandoned buildings, they are also likely to have other airborne risks in the form of carcinogenic asbestos dust and poisonous lead paint dust.
Another risk in a haunted property is carbon monoxide, with just mild exposure you might experience headaches, nausea, vomiting and fatigue. It's even said to cause aural and visual hallucinations. A faulty boiler, gas fire, or other gas appliances can result in a carbon monoxide leak.
It should be noted that normal filter-type masks aren't suitable for long term exposure to carbon monoxide, a more sophisticated air-supply respirator should be used if you're spending any extended amount of time in any area with a CO problem, a better option is to air the property well.

• Extremely lightweight and compact to give the wearer as much comfort as possible.
• A unique and low profile filter designed to fit the contours of your face to give you maximum field of vision.
• Low breathing resistance to reduce the risk of user fatigue and to add additional comfort.
• Close pleated composite hydro-phobic (water resistant) material allows the HESPA filters to provide users with the maximum particulate protection, greater than 99.95%.
• Made from soft thermo-plastic elastomer that is hypo allergenic (latex, silicone and odour free) with easy to adjust head band.