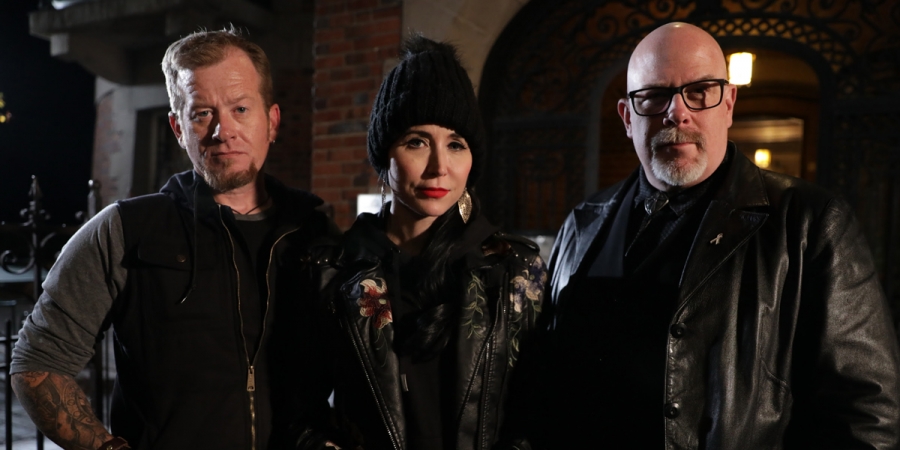 Photo: © Discovery+
Cindy Kaza joins a team of elite paranormal investigators who race to help a petrified western town in the new series 'Ghosts Of Devil's Perch' premiering August 21 on Travel Channel and Discovery+.
A mystery is buried beneath the streets of Butte, Montana, and the spirits tethered to the historic mining town's past are rising to the surface with clues. The discovery of copper in the 1880s turned Butte's Copper Barons into some of the wealthiest men in America. But the hills that glittered in the sun could also cast sinister shadows of greed and vice at night. This led some to brand the mountain town "The Devil's Perch."
With the town now intent on rebuilding its image, it seems every renovation project is digging up a paranormal nightmare with residents and businesses reporting terrifying ghostly encounters. In an unlikely partnership, Mayor J.P. Gallagher and Sheriff Ed Lester have called in an elite team of paranormal investigators to help.
When psychic medium Cindy Kaza, investigator Dave Schrader and tech expert K.D. Stafford arrive in Butte, they find paranormal activity that startles even them. The all-new series, 'Ghosts Of Devil's Perch', premieres on Sunday, August 21 on the Travel Channel in the United States and will drop on the same day on Discovery+.
The team unearths disturbances ranging from feuds between rival mine owners to lovers resorting to violence to vice-fuelled horrors lurking in the town's past. As the disturbing cases begin to form a pattern, the team discovers an army of trapped spirits crying for help, and they refocus their efforts on finding who or what is causing so much anguish. Resorting to threats and violence, the dark entity beneath Butte goes on the attack. The spiritual awakening is in full force and quickly forces the team to question if they'll make it out of Devil's Perch unharmed.
"Towns around the nation frequently approach us, desperate to resolve lingering, unexplained disturbances and lay them to rest. When we heard about the disturbances in the small town of Butte, we knew they needed an elite team of paranormal investigators. We immediately reached out to our expert trio, Dave, Cindy and K.D., to confront whatever forces reside there. In 'Ghosts Of Devil's Perch', we explore its rich history to unlock the town's fear. Along the way, we lay witness to a few surprises," said Matthew Butler, group senior vice president, Travel Channel and Paranormal Streaming Content.
Will the town continue to be haunted by spirits of the past or will it finally break free?