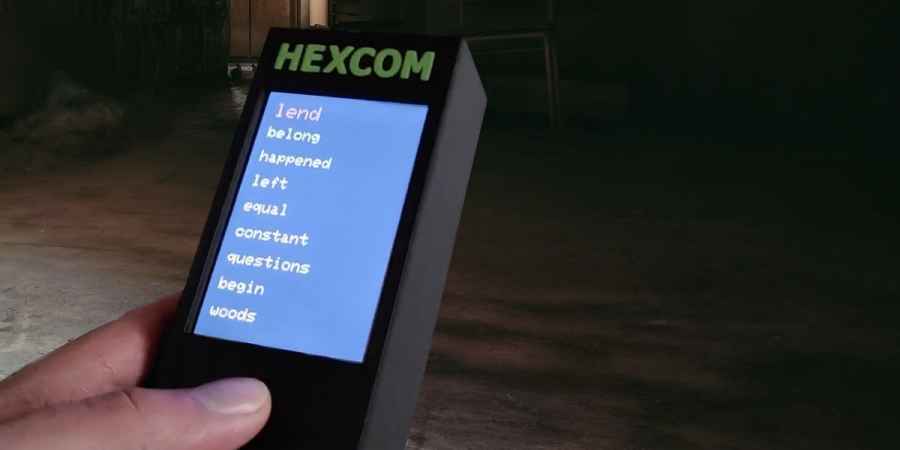 SpiritShack, one of the UK's best known providers of gadgets for ghost hunters has unveiled its new HexCom, a word bank device which they hope will rival the Ovilus.
Not only does the HexCom look great with its large full colour screen, it also has some great features, including a built-in rechargeable battery, on-screen word history and a running time of up to eight hours.
The HexCom creators claim that spirits are able to communicate with investigators through this specially designed device. It uses a built in EMF meter, which is constantly monitoring the ambient electromagnetic fields around the device.
The HexCom has a database of over 2,000 English words, each of these words is linked to a different EMF reading. If there's a significant change in the field strength that settles for more than one second, then the associated word will be displayed on the device's backlit screen.
This means that the words that are generated come directly from the electromagnetic fields around the device via its sensor. Of course there are some unanswered questions here, but those who put faith in these and similar devices belief that spirits are made up of electrical energy and are therefore able to manipulate electronic devices and electromagnetic fields.
Once a word is selected, as well as being displayed on screen, it is spoken aloud through the HexCom's built-in speaker. The device also shows the eight previous words on the screen, making it easier to recall recent responses.
The device has a nice form factor, it's small enough to fit into a pocket, and is very simple to use as it comprises of nothing more than a power button to flick to get you started. Its screen is easy to in the dark thank to its size, its ability to be seen from a wide viewing angle, and of course the bright screen.
The HexCom takes four hours to charge via the USB-C lead that's included, and once charged lasts eight hours, which means you'll always be ready to go and the device will easily last through the longest of investigations. Of course, its runtime can be extended even further by using any USB power bank.
You use the device by turning it on and then asking questions and waiting for responses during an investigation. Being handheld, it can be carried around, but it probably works best when placed and left stationary on a flat surface, this way you know that you're not exposing it to varying levels of electromagnetism as you move around.
The device is a great and attractive alternative to the Ovilus device and mobile apps like the Paratek. You can get yours from SpiritShack now, they currently sell for £250. Check out spiritshack.co.uk for more information and to buy.
Tags:
paranormalghost huntingemf