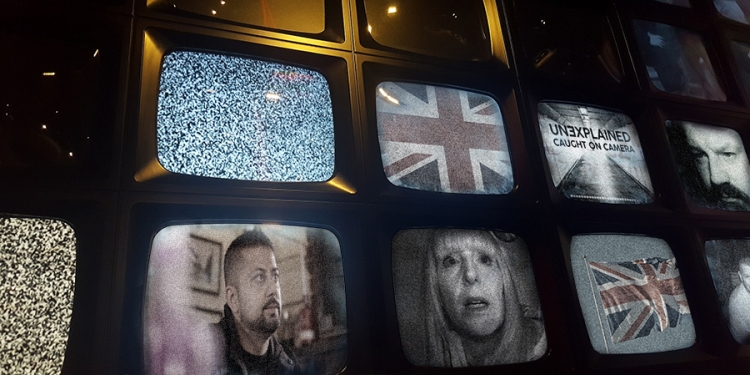 It feels like paranormal television shows are more popular than ever, but here in the UK there's a real lack of new content when it comes to homegrown British shows.
We're not saying there's anything wrong with American shows, or that we don't want to see them here in the UK. It would just be nice to have the choice, variety and breadth of content.
It goes without saying that viewers of paranormal shows in the UK will naturally be more interested in British investigators and haunted locations that are close to them, after all there are so many interesting ghost stories and historic buildings scattered across the British Isles.
The problem is there's only really one channel that shows ghost hunting shows in the UK, and that's Really, which is available on Freeview and various other platforms, and is owned by the multinational media giant Discovery, Inc.
Although Really do schedule a lot of paranormal content and even create weekly paranormal nights, the shows they bring viewers are almost all American shows. The couple of British shows the channel does bring to air just aren't given the same prominence as the US shows.
In October Really brought us their annual '13 Nights Of Frights' event, which brought viewers 13 consecutive nights of ghost hunting entertainment over Halloween. The schedule included new episodes of 'Ghost Adventures', 'Ghosts Of Morgan City', and 'Paranormal 911' - all of which were American shows. The only British show that aired as part of the 13 nights was repeats of 'Most Haunted' at midnight.
The following month, Really announced that it would be extending its paranormal programming to two nights a week, and as would be bringing viewers new episodes of four shows. This time around the lineup did include a British show, 'Help! My House Is Haunted', but the other three shows on the lineup are all American.
It also seems that once again, the British show isn't being given the prominence it deserves. In the lead up to the first night of the new two-day #Freakend schedule US 'Ghost Adventures' was promoted by the channel twice as many times as British 'Help! My House Is Haunted' on social media.
This problem isn't limited to social media marketing. On air both the new series of 'Ghost Adventures' and 'Portals To Hell', another American show, were included in promo spots during ad breaks. They were given much more screen time than 'Help! My House Is Haunted', which didn't even get a proper advert, just a still on screen with a voiceover saying "coming soon".
And to make matters worse, the promotional photo used as the still image was from the show's first series and features the wrong team members, which is just lazy and insulting to Jayne Harris who joined the show in series two. But still it gets worse... all of the new episodes of 'Help! My House Is Haunted' so far have not had closed captions, which has lead to countless complaints to the channel from those who rely on subtitles to enjoy their favourite shows. And you guessed it, all the US shows have complete subtitles.
Furthermore, 'Help! My House Is Haunted' airs after 'Portals To Hell' at 10pm on a Thursday, probably the worst time slot of the two nights.

Earlier this year Really announced that they'd no longer be taking any new episodes of 'Most Haunted', ending a five-year-long relationship. At the time the show's executive producer, Karl Beattie, told fans that this was down to "television politics" and also made it clear that he was unhappy that American shows were being promoted more and being given prominence over British shows.
Part of the reason why Discovery-owned Really channel show American content rather than producing more of their own could be down to budget. Shows like 'Ghost Adventures' is made for Discovery's US Trvl channel, but can also be syndicated around the world, including here in the UK on Really. This means the return on investment on these shows is much greater than a British show, which has a smaller initial audience than it would on an American channel, and probably doesn't have the same international appeal and therefore can't be as easily sold into different territories.
It sounds like we're giving Really a bit of a hard time, and it is a little unfair because they are the only channel that are even attempting to bring British viewers paranormal entertainment. As well as 'Help! My House Is Haunted', this years Really did bring us one other new British show. Their original eight-part series, 'Unexplained: Caught On Camera', aired from July and included Brits Chris French, Jayne Harris, and Barri Ghai. The series was well-produced and very watchable as it was a refreshing alternative to ghost hunting shows, but there's not currently any word on a second series.
Really do also occasionally team up with the paranormal investigation team UK Haunted and broadcast live ghost hunts from various haunted locations, but the channel doesn't have either the confidence or the appetite to put these investigations on television and instead opt to stream them through their social media channels.
Let's give the channel a break. Away from Really within the last few years Channel 5 have dipped their foot into the paranormal market with the British show 'Celebrity Ghost Hunt'. Quest Red also brought us the shows 'Paranormal Lockdown', and 'Haunted Hospitals', both of which are American.
Quest Red is also owned by Discovery, and since Discovery acquired the Really channel from UKTV earlier this year it seems that their paranormal offerings are moving across to Really, which makes sense. 'Haunted Hospitals' - another American show - is now being shown on Really as part of their #Freakend schedule.
A quick scroll through paranormal groups on Facebook reveals countless comments containing complaints about the high volume of American shows, and requests for channels to back existing British series or produce new homegrown paranormal shows.
This failure to offer viewers what they want seems foolhardy. It comes at a time when television channels should be doing all they can to stop their audience moving over to streaming platforms. For every viewer that turns their television off, a new viewer finds one of the many British teams creating great paranormal content for platforms like YouTube and Amazon Prime.
There's far too many teams to mention right now, but on YouTube alone teams like The Ouija Brothers and Phil and Sara Whyman's show 'Are You Haunted?' are gaining momentum and both producing slick, entertaining and credible shows that are both worthy of television exposure. Meanwhile, on Amazon Prime, the Haunted Hunts release their new series next year, and having already seen a preview of the first couple of episodes, we can say that the show is a good as any of the US shows on television.
We can only hope that the lack of original programming in Really's case is simply down to uncertainty due to their change in ownership. We are quietly optimistic that Discovery's move to pool their paranormal offering together on one channel and extend the offering to two nights could mean that they will soon be investing in new British content or more of our existing favourite homegrown shows.
As for other broadcasters, we can only hope that if Really gets it right, other networks might once again see the value in carrying paranormal shows on their channels.
View Comments
Tags:
paranormaltelevision