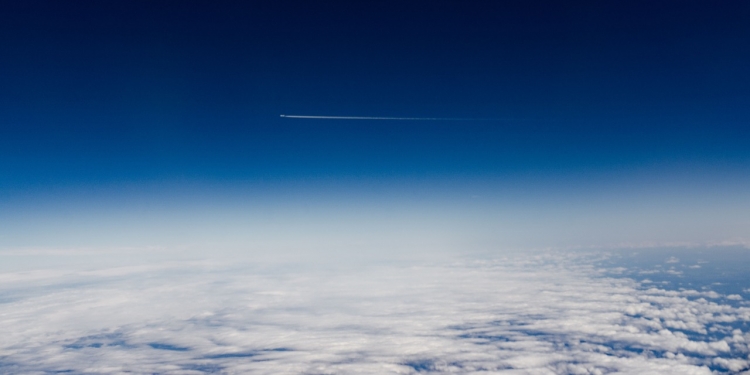 Photo: pixabay.com
One argument which comes up time and time again from flat Earthers trying to defend their belief, is their hypothesis that if space is a vacuum then all the air around Earth should get sucked into it. So, why doesn't our atmosphere vanish into space?
Although I despair for flat Earthers and there inability to comprehend that which is bigger than their tiny little point of view, you can't deny that their constant attempts to convert "globeheads" is pretty comical and a good source of entertainment.
It's now hard to tell whether memes like the one below that attempt to perpetuate the theory that the world isn't round are genuinely made by flat Earth supporters or are nothing more than a humorous parody by internet trolls. 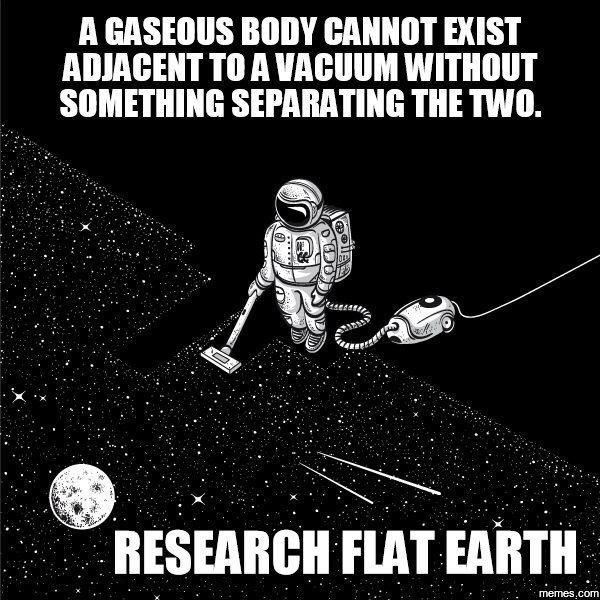 The meme claims that a gaseous body cannot exist adjacent to a vacuum without something separating the two. It's true that at sea level a vacuum can't exist without something to separate it due to the enormous air pressure experienced this close to Earth. In fact, I don't think we can even create a perfect 100% vacuum in a lab under this much pressure.
There are a few misconceptions being bounded around by flat Earthers when it comes to this particular bit of "evidence". Another meme pushed by believers is the one below, which poses the question "do you know how the Earth's non-vacuum meets with the vacuum of space?"
Before I'm given a chance to answer, the meme sums it up with the answer "neither do we" which is implies to be the sentiment of three well known members of the scientific community, Neil deGrasse Tyson, Bill Nye, and Carl Sagan. 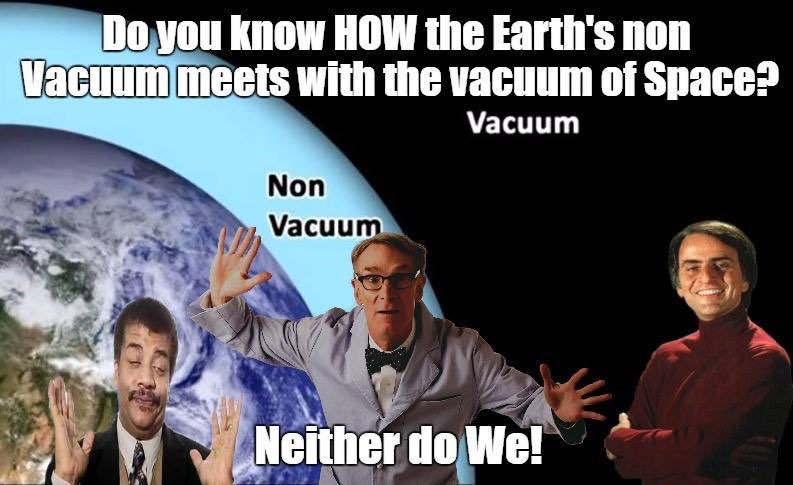 Well, I hate to break it to you flat Earthers, but I do know how the Earth's non-vacuum meets the vacuum of space, I also know why you're having difficultly understanding the principle.
Most people who back this particular claim believe the common misconception that vacuums suck air into them. This is not true. What actually happens is that the pressure of the surrounding air pushes the gases into the void.
If you think of the example of a plane, if the doors is opened mid-flight the cabin depressurises and masks fall from above the seat. The air isn't being sucked out of the aircraft, the pressure outside the plane is lower than inside so the air rushes out of the plane. The air is blown out, not sucked out.
Conversely, if you were able to suck all of the air out of a jar and make a complete vacuum inside. Then you opened it up at sea level, where the air pressure is about 1 kilogram per square centimeter, the huge pressure of the air outside would push air into the jar instantly.
This still doesn't really answer the question though. From the above all we know is that air wouldn't be sucked into space, but what stops the air around Earth being blown into space?
Well, unlike on a plane or in our jar example, there's not a hard line between the atmosphere and the vacuum of space. As you'll know if you've ever climbed a mountain, the air gets thinner the higher you go. Most of the air in the atmosphere is within 10 miles of the Earth's surface, and by the time you get to about 300 miles high there is basically nothing left.
If you opened up that vacuum jar at this height, at the edge of the atmosphere, it would still fill with air but as the air pressure is much much lower it wouldn't be the same instant rush of air you'd experience at sea level. This is because the jar and the air around it are almost at equilibrium.
It's at this height that the atmosphere basically tapers away to nothingness. There's no need for the air to fight off the vacuum of space because by the time atmosphere and space meet, the air pressure is effectively nil. There is no violent divide between Earth and space, no separator or barrier is needed because of the mechanics of air pressure and the thinning of air.
But, in order for the phenomenon of air pressure to exist, there's one more factor which needs to be taken into consideration... gravity. Our planet's gravity pulls on the atmosphere, compressing it, and creating air pressure. The closer you get to Earth, the stronger the pull of gravity and the more dense the air gets.
Without gravity the atmosphere around Earth would drift off into space, but only because the planet would no longer be pulling it in, not because the vacuum of space would be sucking it away.
What baffles me more than anything about this claim is how it's supposed to prove the world is flat in the first place. Surely a divide between space and our atmosphere must exist on a flat Earth in the same way as a round Earth. With the flat Earth model you'd also have to answer the question "what stops air falling off the edge of Earth?"
Tags:
flat earthspacescience