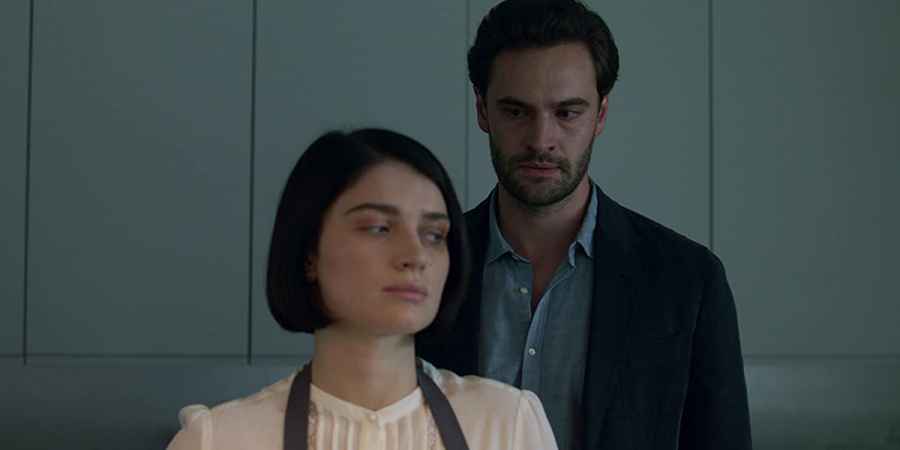 Photo: © Netflix
WARNING: If you don't know what the supernatural twist is in 'Behind Her Eyes', then go and watch the series now and stop reading this as the rest of the article contains spoilers throughout.
Netflix's latest hit series, 'Behind Her Eyes', doesn't seem like a supernatural thriller at first glance, but as the story develops it becomes clear that something unusual is going on.
If you've made it through all six episodes of the series, then we can talk about one of the most intriguing plot points without the fear of spoilers... astral projection. This esoteric practice allows the practitioner to embark on a deliberate out-of-body experience allowing their consciousness to leave the body and explore the wider world.
Astral projection is a key part of the shock ending of 'Behind Her Eyes'. In the series we learn that Adele has been using her supernatural ability to leave her body and spy on her husband and Louise. Despite several real-life research projects to test whether out-of-body experiences can lead to this kind of psychic insight or intuition, no link has been proven, but the idea of leaving your body and exploring is considered by many to be a very real phenomenon.
'Behind Her Eyes' isn't the first work of fiction to employ astral projection as a plot mechanic, the storyline of the 2010 supernatural horror movie, 'Insidious', revolved heavily around out-of-body experiences. It's also seen in the Netflix series 'Stranger Things' when Eleven projects her consciousness in order to gain insight and view remote locations.
Astral projection is often said to be the result of the soul physically leaving the body as a form of extra-corporeal energy, allowing the soul to travel to a different plane of consciousness. Of course whether you believe this has a lot to do with your beliefs on death and the afterlife. The concept of astral projection is similar to that of near-death experiences (NDE) and most people who experience an out-of-body experience will do so as an NDE.
As for voluntarily stepping out of your body, it's said that one US government experiment was able to trigger this condition using a centrifuge. Pilots were spun up to high speeds until they experienced G-force Induced Loss of Consciousness (G-LOC). The forces in play cause the blood in the body to move away from the head towards the feet, which resulted in a loss of consciousness.
The experience was described in a similar way to an out-of-body experience, starting with tunnel vision caused by a loss of peripheral vision. This leads on to a blackout, a complete loss of vision but retained consciousness, and eventually a loss of consciousness all together. Apparently, the longer they spun the subjects in the centrifuge, the more they reported experiencing out-of-body experiences.
Luckily you won't need a centrifuge to try astral projection for yourself, although there is no agreed upon scientific method of voluntarily inducing an out-of-body experience. However, there are hundreds of books and websites that offer guides on how to teach yourself how to astral project, and this is just another such guide, but we've trawled through several guides and found the common methods and techniques to put together our own step-by-step guide.
Some say the astral projection can be as easy as simply lying down, getting yourself comfortable and visualising that you are leaving your body. This is a form of meditation, it can be therapeutic, relaxing and a positive experience. And since true astral projection is unproven and experiences are purely anecdotal, visualising an out-of-body experience might be as good as it gets.

A Guide To Astral Projection

If you want to embark on a voluntary out-of-body experience, also known as an extra-corporeal experience (ECE), you'll first need to make sure you are alone and undistracted in a quiet and comfortable location, ideally your bedroom or a comfy arm chair. Don't turn out the lights, as it'll make it harder to visualise your current location - plus you won't be able to see where you're going when you leave your body.
Put your phone on silent, close the curtains, leave the lights on, turn everything else off, and then lie down or get comfy in your favourite chair.
Step One - Enter a REM state
Astral projection is very closely linked with lucid dreaming, these are dreams that you are consciously aware of being in and can often change or influence. Lucid dreaming happens during a phase of sleep called REM, or Rapid Eye Movement sleep. One way to do this is to set an alarm for six hours time and then fall asleep. When the alarm wakes you in six hours, it should interrupt your natural sleep cycle at a point when you are in a REM state.
Step Two - Return to your dreamscape
Next you'll need to put your body back to sleep while keeping your mind awake. So, get yourself comfortable again, close your eyes and prime yourself to fall back to sleep by telling yourself with conviction, "I will be aware and awake as my body falls asleep," or repeat "body asleep, mind awake." Stay present, mentally alert, and aware of your body and mind as you begin to drift back to sleep.
There's an alternative method to steps one and two that involves using a lucid dream sleep mask. When the special sleep mask detects that you've entered REM sleep it emits gentle, customisable light signals. The flashing lights aren't enough to wake you up, but it's said to be enough to signal to your consciousness that you are a sleep and in a REM state, allowing you to become aware.
Step Three - Visualisation
The next step is to visualise leaving your body, that's why it's a good idea to keep the lights on so you can clearly picture your body in its current position.
One common method is called the rope technique. Begin by imagining there is a rope hanging above you. Imagine yourself reaching towards it, see your hand stretching out and grasping it. Pull yourself up the by pulling it towards you, then stretch out your other hand and grab the rope higher, and again pull yourself further up the rope. Visualise yourself moving up as you climb out of your physical body. Concentrate on climbing the rope and don't stop until you feel your entire self separating from your body.
Step Four - Explore
Now you should be floating above your body. Look down at yourself, see your body in the position you left it and then look around and take in the sights of the room around you. Some people find that once they leave their body, they get sucked back into it quickly, so move away as soon as you feel comfortable with your surroundings. From this point you can just keep on going, explore another room, go outside, see how far you can go before you naturally wake up and you are pulled back to reality.
Add A Comment
Tags:
paranormaltopicalnetflix